On January 23, 1960, The bathyscaphe USS Trieste broke a depth record by descending to 35,797 feet (10,911 meters) in the Pacific Ocean. Trieste is a Swiss-designed, Italian-built deep-diving research bathyscaphe, which with its crew of two reached its record maximum depth in the deepest known part of the Earth’s oceans, the Challenger Deep, in the Mariana Trench near Guam in the Pacific. Jacques Piccard (son of the boat’s designer Auguste Piccard) and U.S. Navy Lieutenant Don Walsh achieved the goal of Project Nekton, becoming the first manned vessel to have reached the bottom of the Challenger Deep.

Trieste consisted of a float chamber filled with gasoline for buoyancy, with a separate pressure sphere to hold the crew. This configuration (dubbed a “bathyscaphe” by the Piccards), allowed for a free dive, rather than the previous bathysphere designs in which a sphere was lowered to depth and raised again to the surface by a cable attached to a ship. Auguste Piccard composed the name bathyscaphe using the Ancient Greek words βαθύς bathys (“deep”) and σκάφος skaphos (“vessel”/”ship”).

Trieste was designed by the Swiss scientist Auguste Piccard and originally built in Italy. His pressure sphere, composed of two sections, was built by the company Acciaierie Terni. The upper part was manufactured by the company Cantieri Riuniti dell’Adriatico, in the Free Territory of Trieste (on the border between Italy and Yugoslavia, now in Italy); hence the name chosen for the bathyscaphe. The installation of the pressure sphere was done in the Cantiere navale di Castellammare di Stabia, near Naples. Trieste was launched on August 26, 1953, into the Mediterranean Sea near the Isle of Capri. The design was based on previous experience with the bathyscaphe FNRS-2. Trieste was operated by the French Navy. After several years of operation in the Mediterranean Sea, the Trieste was purchased by the United States Navy in 1958 for $250,000 (equivalent to $2.2 million today).

At the time of Project Nekton, Trieste was more than 50 feet (15 m) long. The majority of this was a series of floats filled with 22,000 U.S. gallons (85,000 liters) of gasoline, and water ballast tanks were included at either end of the vessel, as well as releasable iron ballast in two conical hoppers along the bottom, fore and aft of the crew sphere. The crew occupied the 7.09-foot (2.16 m) pressure sphere, attached to the underside of the float and accessed from the deck of the vessel by a vertical shaft that penetrated the float and continued down to the sphere hatch.

The pressure sphere provided just enough room for two people. It provided completely independent life support, with a closed-circuit rebreather system similar to that used in modern spacecraft and spacesuits: oxygen was provided from pressure cylinders, and carbon dioxide was scrubbed from breathing air by being passed through canisters of soda-lime. Power was provided by batteries.

Trieste was subsequently fitted with a new pressure sphere, manufactured by the Krupp Steel Works of Essen, Germany, in three finely-machined sections (an equatorial ring and two caps).

To withstand the enormous pressure of 110 MPa (1.25 metric tons per cm²) at the bottom of Challenger Deep, the sphere’s walls were 5 inches (12.7 centimeters) thick (it was overdesigned to withstand considerably more than the rated pressure). The sphere weighed 31,400 pounds (14.25 metric tons) in air and 18,000 pounds (eight metric tons) in water giving it an average specific gravity of 13/(13−8) = 2.6 times that of sea water.  The float was necessary because of the sphere’s density: it was not possible to design a sphere large enough to hold a person that could withstand the necessary pressures, yet also have metal walls thin enough for the sphere to be neutrally buoyant. Gasoline was chosen as the float fluid because it is less dense than water, and also less compressible, thus retaining its buoyant properties and negating the need for thick, heavy walls for the float chamber.

Observation of the sea outside the craft was conducted directly by eye, via a single, very tapered, cone-shaped block of acrylic glass (Plexiglas), the only transparent substance identified which would withstand the external pressure. Outside illumination for the craft was provided by quartz arc-light bulbs, which proved to be able to withstand the over 1,000 standard atmospheres (15,000 pounds per square inch or 100 MPa) of pressure without any modification.

Twenty thousand pounds (nine metric tons) of magnetic iron pellets were placed on the craft as ballast, both to speed the descent and allow ascent, since the extreme water pressures would not have permitted compressed air ballast-expulsion tanks to be used at great depths. This additional weight was held in place at the throats of two hopper-like ballast silos by electromagnets, so in case of an electrical failure the bathyscaphe would automatically rise to the surface.

Transported to the Naval Electronics Laboratory’s facility in San Diego, California, Trieste was modified extensively by the Americans, and then used in a series of deep-submergence tests in the Pacific Ocean during the next few years, culminating in the dive to the bottom of the Challenger Deep during January 1960.

Trieste departed San Diego on October 5, 1959, for Guam aboard the freighter Santa Maria to participate in Project Nekton, a series of very deep dives in the Mariana Trench.

The descent to the ocean floor took 4 hours 47 minutes at a descent rate of 2 miles per hour (0.9 meters per second or 3.2 km/h). After passing 30,000 feet (9,000 m), one of the outer Plexiglas window panes cracked, shaking the entire vessel. The two men spent barely twenty minutes on the ocean floor. The temperature in the cabin was 45°F (7°C) at the time. While at maximum depth, Piccard and Walsh unexpectedly regained the ability to communicate with the support ship, USS Wandank (ATA-204), using a sonar/hydrophone voice communications system. At a speed of almost 1 mile per second (1.6 km/s) — about five times the speed of sound in air — it took about seven seconds for a voice message to travel from the craft to the support ship and another seven seconds for answers to return.

While at the bottom, Piccard and Walsh reported observing a number of small sole and flounder (both flatfish). The accuracy of this observation has later been questioned and recent authorities do not recognize it as valid. The theoretical maximum depth for fish is at about 26,200-27,900 feet (8,000–8,500 m), beyond which they would become hyperosmotic. Invertebrates such as sea cucumbers, some of which potentially could be mistaken for flatfish, have been confirmed at depths of 33,000 feet (10,000 m) and more. Walsh later said that their original observation could be mistaken as their knowledge of biology was limited. Piccard and Walsh noted that the floor of the Challenger Deep consisted of “diatomaceous ooze”. The ascent took 3 hours and 15 minutes.

Beginning in April 1963, Trieste was modified and used in the Atlantic Ocean to search for the missing nuclear submarine USS Thresher (SSN-593). Trieste was delivered to Boston Harbor by USS Point Defiance (LSD-31) under the command of Captain H. H. Haisten. In August 1963, Trieste found the wreck off the coast of New England, 8,400 feet (2,600 m) below the surface. Trieste was changed, improved and redesigned so many times that almost no original parts remain. It was transported to the Washington Navy Yard where it was exhibited along with the Krupp pressure sphere in the National Museum of the U.S. Navy at the Washington Navy Yard in 1980. Its original Terni pressure sphere was incorporated into the Trieste II.

The song “The Trench” by Danish composer Ste van Holm is a tribute to the Mariana Trench dives. Another song inspired by the bathyscaphe is “Voyage Of The Trieste”, an instrumental track on The Chocolate Watchband’s 1968 album The Inner Mystique. Producer Jack Dangers released the limited edition album Bathyscaphe Trieste on the label Primary Numbers (PRIMA007) on September 17, 2013.

The producers of the TV show Star Trek: The Next Generation named one of the show’s starships U.S.S. Trieste, after the bathyscaphe. It also appears in the 2008 novel Flood by Stephen Baxter.

There are a number of stamp entities throughout the world that release endless streams of stamps with themes that have no relation to their territory or region. The “worst” of these release numerous large sets of stamps often accompanied by multiple souvenir sheets. One advantage of all those stamps being issued is that they occasionally include subjects not often touched by other nations. In the case of the USS Trieste, I’ve only been able to find four issues picturing the bathyscaphe — only one of those is from a stamp issuer with any relation to the subject matter. I was somewhat surprised that the United States didn’t release anything connected to the 50th anniversary of the historic dive in 2010 and I doubt the USPS will mark the 60th anniversary next year. However, the “topical flood” nations of Antigua & Barbuda (Scott #2405 released October 2, 2000); Cambodia (Scott #1383 released August 12, 1994), and Tanzania (Scott #561 released February 12, 1990) have all issued attractive stamps bearing the little bathyscaphe, Almost…

I own the souvenir sheet from Antigua & Barbuda, released as part of a set that included six stamps, a souvenir sheet of six, and two souvenir sheets of one stamp each (Scott #2398-2406). It was one of those late-night eBay bids I make when something catches my eye (usually thinking, “that would make a good ASAD stamp”). When I noticed that today was the anniversary of the record-breaking dive in the Challenger Deep, I recalled having a stamp picturing the “Trieste“. I was nearly finished with today’s article when I happened to glance at the “featured image” portion of my blog’s editing page and noticed that the vessel on the stamp didn’t look anything like Piccard’s craft. It certainly isn’t Trieste II, either. In fact, I couldn’t match it with any bahtyscaphe at all although it is slightly  reminiscent of the DSV Alvin which carried Dr. Robert Ballard to the wreck of RMS Titanic in 1986.

This left me with a bit of a problem. Obviously, I couldn’t use the souvenir sheet from Antigua & Barbuda, as attractive as it may be, and I don’t have any other stamps in my collection even vaguely appropriate (a couple of stamps portraying U.S. nuclear-powered submarines being the closest). I pondered finding a different topic altogether (today happens to be Bounty Day, the birth anniversary of John Hancock, and the date in 1968 that the USS Pueblo was captured by North Korea). That would have involved starting fresh (and it was already past 9:00 p.m. when I noticed the discrepancy).

I have decided to use a stamp not yet in my collection (but one I just purchased using “Buy It Now” on eBay). I will replace the images used in this article once the actual items arrive (I bought one mint copy, a folder including CTO blocks of four of each of the two stamps in the set, and a first day cover). This, of course, is the issue from the only stamp-issuing entity connected with the subject matter:  Scott #946 issued by Switzerland on May 17, 1994. It was part of that country’s Europa set for 1994, the other stamp pictures another of August Piccard’s inventions — the stratospheric balloon FNRS-1 which set a world altitude record (Scott #947). The stamps, in denominations of 60- and 100-centimes, respectively, were designed by Pierre Bauer and printed by the Swiss firm of Courvosier using the photogravure method, comb-perforated 11¾. There were 17,690,000 copies of Scott #946 issued and 5,610,000 copies of Scott #947. 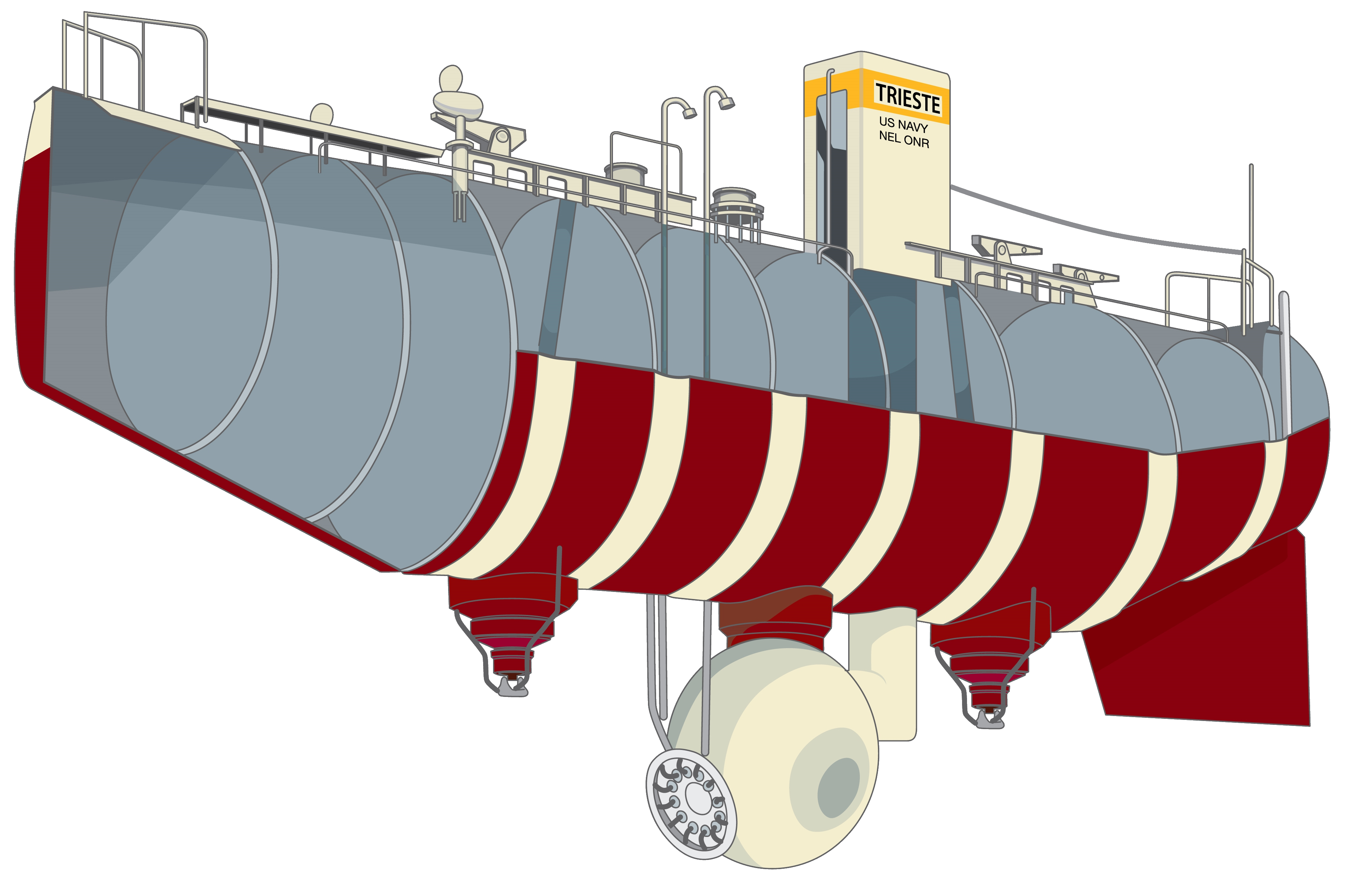 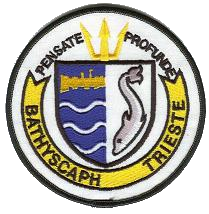