Charles John Huffam Dickens was born on February 7, 1812, at 1 Mile End Terrace (now 393 Commercial Road), Landport in Portsea Island (Portsmouth), the second of eight children of Elizabeth Dickens (née Barrow; 1789–1863) and John Dickens (1785–1851). His father was a clerk in the Navy Pay Office and was temporarily stationed in the district. He asked Christopher Huffam, rigger to His Majesty’s Navy, gentleman, and head of an established firm, to act as godfather to Charles. Huffam is thought to be the inspiration for Paul Dombey, the owner of a shipping company in Dickens’s novel Dombey and Son (1848).

Dickens was an English writer and social critic. He created some of the world’s best-known fictional characters and is regarded by many as the greatest novelist of the Victorian era. His works enjoyed unprecedented popularity during his lifetime, and by the 20th century critics and scholars had recognized him as a literary genius. His novels and short stories are still widely read today.

Dickens left school to work in a factory when his father was incarcerated in a debtors’ prison. Despite his lack of formal education, he edited a weekly journal for 20 years, wrote 15 novels, five novellas, hundreds of short stories and non-fiction articles, lectured and performed readings extensively, was an indefatigable letter writer, and campaigned vigorously for children’s rights, education, and other social reforms.

Dickens’s literary success began with the 1836 serial publication of The Pickwick Papers. Within a few years he had become an international literary celebrity, famous for his humor, satire, and keen observation of character and society. His novels, most published in monthly or weekly installments, pioneered the serial publication of narrative fiction, which became the dominant Victorian mode for novel publication. Cliffhanger endings in his serial publications kept readers in suspense. The installment format allowed Dickens to evaluate his audience’s reaction, and he often modified his plot and character development based on such feedback. For example, when his wife’s chiropodist expressed distress at the way Miss Mowcher in David Copperfield seemed to reflect her disabilities, Dickens improved the character with positive features. His plots were carefully constructed, and he often wove elements from topical events into his narratives. Masses of the illiterate poor chipped in ha’pennies to have each new monthly episode read to them, opening up and inspiring a new class of readers.

Dickens was regarded as the literary colossus of his age. His 1843 novella, A Christmas Carol, remains popular and continues to inspire adaptations in every artistic genre. Oliver Twist and Great Expectations are also frequently adapted, and, like many of his novels, evoke images of early Victorian London. His 1859 novel, A Tale of Two Cities, set in London and Paris, is his best-known work of historical fiction. Dickens has been praised by fellow writers — from Leo Tolstoy to George Orwell, G. K. Chesterton and Tom Wolfe — for his realism, comedy, prose style, unique characterizations, and social criticism. On the other hand, Oscar Wilde, Henry James, and Virginia Woolf complained of a lack of psychological depth, loose writing, and a vein of saccharine sentimentalism. The term Dickensian is used to describe something that is reminiscent of Dickens and his writings, such as poor social conditions or comically repulsive characters.

On June 8, 1870, Dickens suffered a stroke at his home after a full day’s work on Edwin Drood. He never regained consciousness, and the next day, five years to the day after the Staplehurst rail crash, he died at Gads Hill Place. Biographer Claire Tomalin has suggested Dickens was actually in Peckham when he suffered the stroke, and his mistress Ellen Ternan and her maids had him taken back to Gad’s Hill so the public would not know the truth about their relationship. Contrary to his wish to be buried at Rochester Cathedral “in an inexpensive, unostentatious, and strictly private manner”, he was laid to rest in the Poets’ Corner of Westminster Abbey. A printed epitaph circulated at the time of the funeral reads:

To the Memory of Charles Dickens (England’s most popular author) who died at his residence, Higham, near Rochester, Kent, 9 June 1870, aged 58 years. He was a sympathiser with the poor, the suffering, and the oppressed; and by his death, one of England’s greatest writers is lost to the world.

His last words were: “On the ground”, in response to his sister-in-law Georgina’s request that he lie down. On Sunday, June 19, 1870, five days after Dickens was buried in the Abbey, Dean Arthur Penrhyn Stanley delivered a memorial elegy, lauding “the genial and loving humorist whom we now mourn”, for showing by his own example “that even in dealing with the darkest scenes and the most degraded characters, genius could still be clean, and mirth could be innocent”. Pointing to the fresh flowers that adorned the novelist’s grave, Stanley assured those present that “the spot would thenceforth be a sacred one with both the New World and the Old, as that of the representative of literature, not of this island only, but of all who speak our English tongue.”

In his will, drafted more than a year before his death, Dickens left the care of his £80,000 estate to his longtime colleague John Forster and his “best and truest friend” Georgina Hogarth who, along with Dickens’s two sons, also received a tax-free sum of £8,000 (about £800,000 in present terms). Although Dickens and his wife had been separated for several years at the time of his death, he provided her with an annual income of £600 and made her similar allowances in his will. He also bequeathed £19 19s to each servant in his employment at the time of his death. 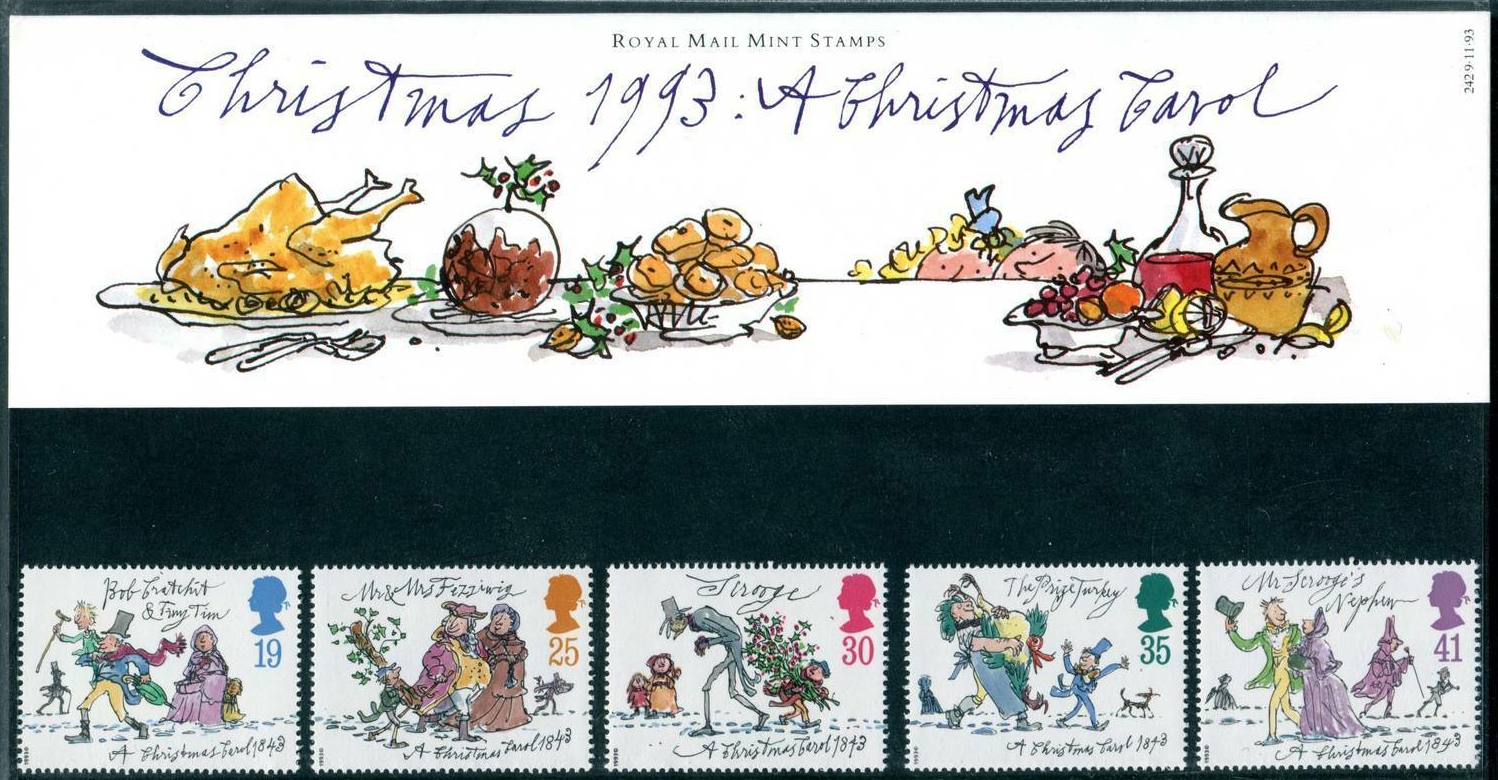 A fair number of stamps have been released over the years from a variety of stamp issuing entities honoring Charles Dickens and his works. In additional to the expected British Commonwealth members and the “usual” emirates going after the topical collector’s money, one of the most unlikely (not to mention the earliest actual postage stamp picturing Dickens) was from the USSR to mark his 150th birthday in 1962 (Scott #2588). Even earlier than the Russian stamp was a “poster stamp” dating from 1912. A personal favorite includes Great Britain’s holiday set for 1993 (Scott #1528-1532) which marked the 150th anniversary of the publication of A Christmas Carol and featuring the artwork of Quentin Blake who has long illustrated the works of Roald Dahl, another favorite author of mine. An oddity was a 1970 set of four stamps released by the future UAE sheikdom of Fujeira which pictured scenes marking the “Anniversary of World Scoutism” but bearing an inscription marking the “Centenary of Charles Dickens” (Michel #517-520).

Another favorite is another Christmas issue, a souvenir sheet from St. Vincent in the Caribbean which pictures a teacher reading to students gathered in a circle around her (Scott #1065). Naturally, the book she is reading from is A Christmas Carol by Charles Dickens. Although the story isn’t one of my favorites, I do try to read it each year during the holidays. When I was very young (I think I was in the third grade), I made my “acting debut” playing Jacob Marley in our school production of the play. When I began my career in education, I started out as a reading teacher and often gathered my students on the floor in a similar reading circle. Although I never read Dickens to them, I had recently rediscovered Roald Dahl and I vividly remember reading Matilda over the course of a few weeks.

I especially try to seek out stamps portraying scenes from my favorite novel of all time, Great Expectations (1861). At this late date, I cannot recall if I saw the 1946 David Lean movie adaptation before reading the book for the first time, but that version remains my second favorite movie (the first being To Kill A Mockingbird with Gregory Peck). The young Jean Simmons as Estella was my first real crush. Thus, I am disappointed that Great Britain has yet to issue a single stamp with Great Expectations as its subject matter.

The colony then known as Saint Christopher-Nevis-Anguilla in the Caribbean Sea issued two stamps in 1970 picturing scenes from this particular novel — Scott #223 has the graveyard scene while today’s stamp, Scott #224, pictures Miss Havisham and the young Pip. These were part of a larger set of four marking the centennial of Dickens’s death and were released on May 1, 1970, having been printed using offset lithography, perforated 13 x 13¼. Scott #224 is denominated at 10 East Caribbean cents and printed in brown, claret and gold.

Collecting Dickens and his works on stamps is an interesting topical with a variety of material to be found, several of which illustrate today’s article. In 1988, Great Britain issued a series of booklets containing Machin stamps that portrayed various Dickens books on the covers (yes, Great Expectations was one of these but I’d rather the book receive its own stamp). There are also quite a few pictorial cancellations honoring Dickens including those from his birthplace at Portsmouth and the annual Charles Dickens Festival.

More images of Charles Dickens stamps and covers can be seen in my Flickr album below (if the slideshow doesn’t work, you can click here for direct access): 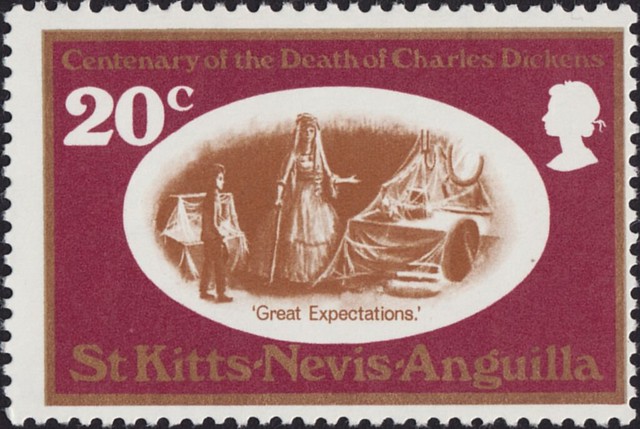 One thought on “Charles Dickens: A Philatelic Tribute on His Birthday”