Well, I made a mistake and came extremely close to missing my first day since beginning A Stamp A Day on July 1, 2016 — 965 days of uninterrupted posts ago. I spent much of the evening putting together a 3,000-word article before noticing that I had the wrong date on my calendar; the subject matter dealt with in the article actually happened on February 18 rather than the 17. I went ahead and finished that article and then went to my calendar of potential subjects looking for an alternative. My backup topic also happened to have occurred on February 18 and I quickly scanned the Wikipedia Days of the Year page for today’s date looking for something, anything that matched a stamp in my collection (the closest I came was the first ship passed through the Suez Canal on February 17, 1867. I still cannot believe I don’t have a single stamp picturing the Suez Canal. I will have to find one so I am ready next year….

When all else fails, I search for a random stamp that catches my eye (preferably one that doesn’t require a lot of research when time is running out as it is tonight). When I receive mail, I have gotten into the habit of scanning the covering envelopes as well as the contents; I obtained a new scanner earlier this year which is much faster at scanning higher resolutions so I do this as a default. I found the stamp pictured above in my folder of stamps scanned in January. I’d ordered several classic U.S. stamps (filling some spaces in the 1869 pictorials, 1893 Columbians and 1898 Trans-Mississippians) and this was one of several stamps on the outer cover. Thus, today’s entry is not only the first “random stamp day” in February (the last being a French stamp on January 30) but also the first stamp from Italy since March 2017 (and only the second featured on ASAD). 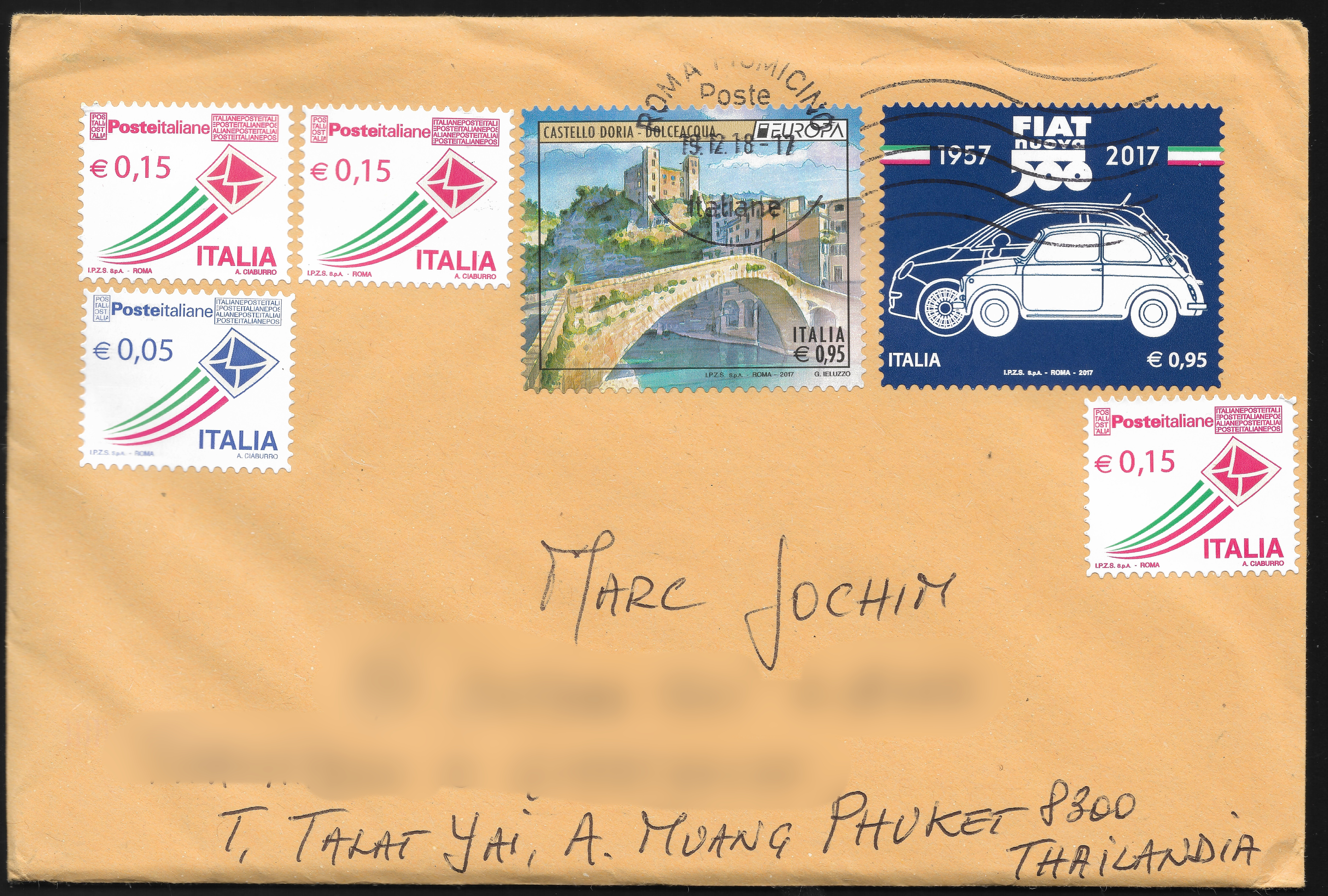 I found the stamp listed on the Colnect catalogue website but they don’t have a Scott number so I’ll use the Michel number instead. Issued on May 9, 2017, Michel #3987 was part of a two-stamp EUROPA set released by Italy under that year’s “Bridges” topic. This is a beautiful bridge located outside of Doria Castle (Castello Doria) in Dolceacqua, Italy, portrayed as a watercolor painting on the 0.95-euro cent self-adhesive stamp. Designed by G. Ieluzzo, it was printed using the photogravure process by the printing firm of IPZS in sheets of 28 stamps each. The stamps measure 48 x 40 mm and there were 600,000 of them printed with die cut perforations in a gauge of 12.

Wikipedia has an extremely brief article about the town of Dolceacqua but there is no mention at all of the castle. The entire text of the article follows (without my usual editorial changes into American English):

“Dolceacqua (Ligurian: Dôsaiga, locally Dussaiga) is a comune (municipality) in the Province of Imperia in the Italian region Liguria, located about 120 kilometres (75 mi) southwest of Genoa and about 35 kilometres (22 mi) west of Imperia, on the border with France. As of 31 December 2014, it had a population of 2,078 and an area of 20.2 square kilometres (7.8 sq mi).

In Dolceacqua is located the Pinacoteca Giovanni Morscio.“ 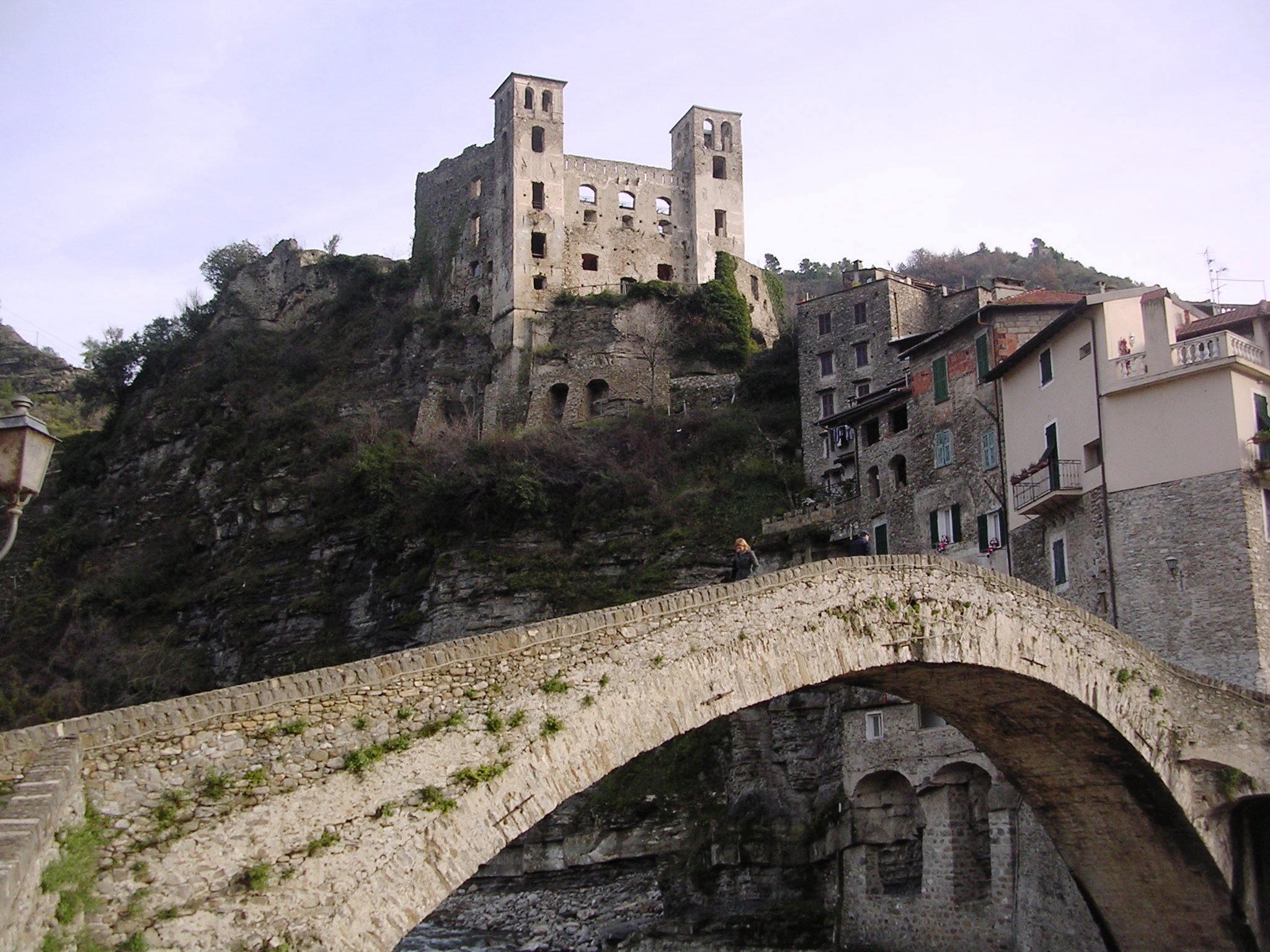 That last sentence refers to a local museum which seems to have one claim to fame: a visit by American actor Tom Cruise.

“The Doria Castle was built in the 11th century by the Counts of Ventimiglia on a rocky outcrop dominating the Nervia Valley. Purchased by Oberto Doria in 1270 and expanded over the centuries, it was used as a fortified manor until it was abandoned in 1744.”

Finally, I present the Google Translate version of the Italian Wikipedia page on the castle. All grammar mistakes are copyright Google, of course:

“The first mention of the castle and the village of Dolceacqua, called at the time Dulzana, dates back to 1177 in an ancient document attesting the ownership of the counts of Ventimiglia . It will be in 1270 , almost a century later, that the fief and its manor will be bought by Oberto Doria – the latter founder of the famous dynasty that will dominate Genoa and its republic – which will expand its territories in the Val Nervia to the villages of Apricale , Perinaldo and Isolabona . 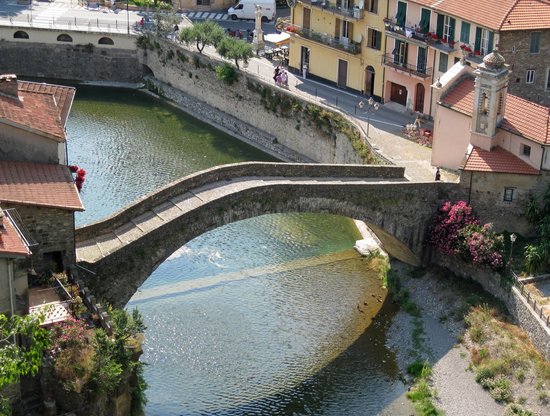 “The castle will be in the fourteenth century at the center of bitter fights between the factions of the Guelphs and Ghibellines and the Doria family, Ghibelline exponent, will therefore have to undergo two serious sieges in 1319 and 1329 ; the sieges were ordered by King Robert of Anjou , Count of Provence and of the Guelph party, who succeeded in his intent of conquest by forcing the Dorias to submit to his will. The lords of the family will therefore become vassals of the latter and later of the Republic of Genoa .

“In 1526 an exponent of the family – Bartolomeo Doria – ceded his feudal rights over Dolceacqua to Duke Carlo III of the Duchy of Savoy , becoming a de facto vassal of the Savoyard Duke. The Savoys , thanks also to the consolidated alliance between the Ligurian family and the royal family, will assure their own protection also following new agreements between Stefano Doria and Emanuele Filiberto I of Savoia .

“At the beginning of the seventeenth century relations between the two families began to crack, especially after 1625 when the Doria sided with the Genoese republic in the war against the Duchy of Savoy. During the war of succession in 1744 the castle was again the scene of clashes and furious battles due to its strategic position considered important for the possible obstacle that could have created the French and Spanish army. The two armies, allies, succeeded after violent struggles to conquer the fortress on 27 July 1745 . 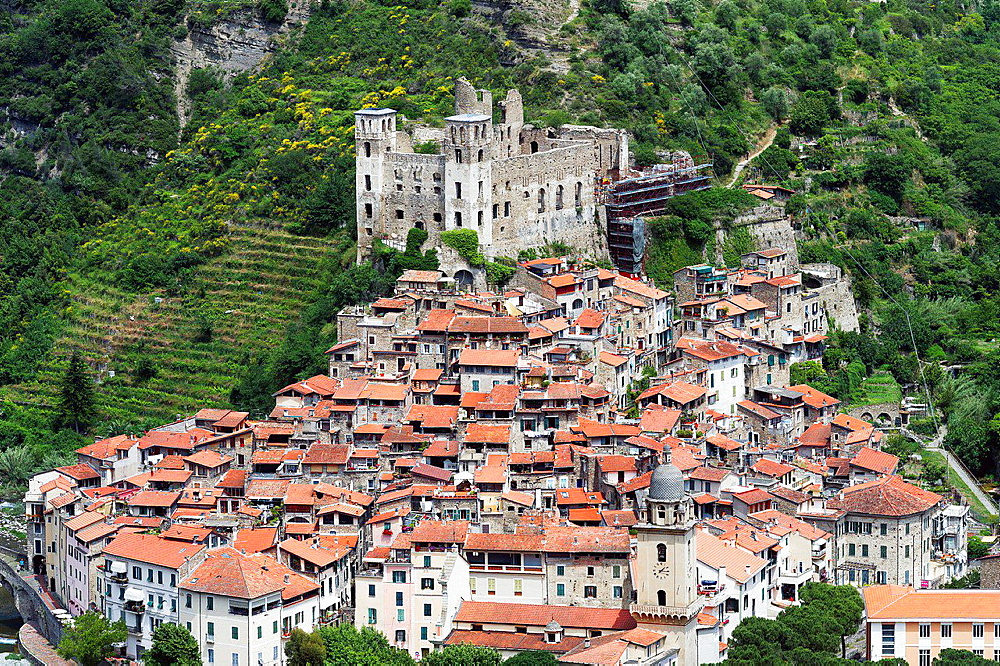 “In 1942 the castle became the property of the Municipality of Dolceacqua.

“Originally the structure was composed in the twelfth century by a circular tower – still existing in the center of the complex – and a smaller building where the guard office used to live. The castle was enlarged in the 16th century by the then local lord Stefano Doria, to whom he added to the previous structure a spurred rampart in the eastern sector and the two identical square towers.

“Today the structure appears as divided into two blocks, the front part was in fact intended for the control and security of the village as well as service rooms, prisons and warehouses; the rear part, connected to the front of the building by a large courtyard, was instead the place where the reception and reception rooms of the guests were located and where the local lords resided. 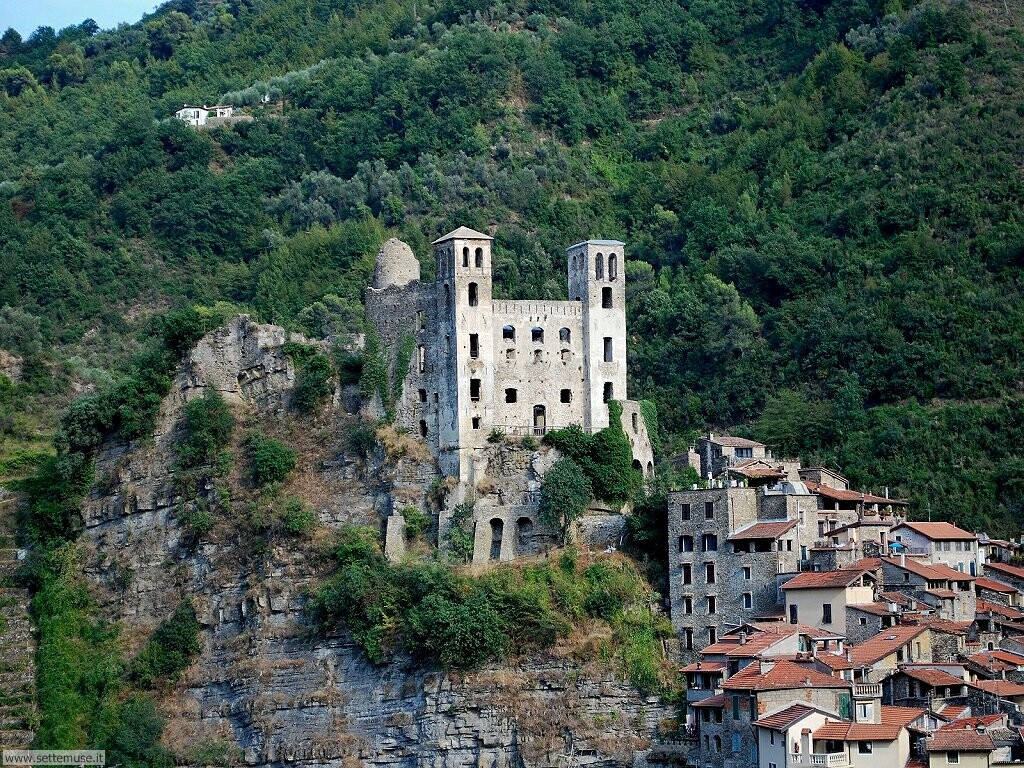 “The castle rests on the Flysch of Ventimiglia whose exposed wall shows powerful arenaceous layers interspersed with turbidites : in such structures the Bouma Sequence is particularly evident (Ta-d Ta-c).”

There you have a very fast, emergency conditions, late-night “random stamp day” article. If I had more time, I would have fixed it up a bit better but I love the stamp and the images I found of the castle have put it on my list of things to do should I ever visit Italy.

Tomorrow’s article, written a day early, is scheduled to appear about 2:00 p.m. GMT +7. This means that I will have the evening free to pursue other endeavors. My mistake was beneficial after all.

One thought on “Doria Castle in Dolceacqua”