The Iron Pagoda (鐵塔) of Youguo Temple (佑國寺) in Kaifeng (開封), a prefecture-level city in east-central Henan province, China, is a Buddhist Chinese pagoda built in 1049 during the Northern Song dynasty (960–1279) of China. The pagoda is so-named not because it is made of iron, but because its color resembles that of iron. It is a brick pagoda tower built on the location of a previous wooden one that had been burnt down by lightning fire in 1044. Along with the Liuhe, Lingxiao, Liaodi, Pizhi, and Beisi pagodas, it is seen as a masterpiece of Song dynasty architecture.

Kaifeng is one of the Eight Ancient Capitals of China. It was the capital seven times in history, and is most famous for being the capital of China in the Northern Song dynasty. The postal romanization for the city is Kaifeng. Its official one-character abbreviation in Chinese is 汴 (Biàn). As with Beijing, there have been many reconstructions during its history and was known previously by several names:

The name “Kaifeng” first appeared as the area’s name after the Qin’s conquest of China in the second century BC and literally means “expand the borders” and figuratively “hidden” and “vengeance”. Its name was originally Qifeng (啓封), but the syllable qi was changed to the essentially synonymous kai to avoid the naming taboo of Liu Qi (Emperor Jing of Han).

In 364 BC, during the Warring States period, the State of Wei founded the city of Daliang (大梁) as its capital in this area. During this period, the first of many canals in the area was constructed linking a local river to the Yellow River. When the State of Wei was conquered by the State of Qin, Kaifeng was destroyed and abandoned except for a mid-sized market town, which remained in place. Early in the 7th century, Kaifeng was transformed into a major commercial hub when it was connected to the Grand Canal as well as through the construction of a canal running to western Shandong.

In 781 during the Tang dynasty, a new city was reconstructed and named Bian (汴). Bian was the capital of the Later Jin (936–946), Later Han (947–950), and Later Zhou (951–960) of the Five Dynasties and Ten Kingdoms period. The Song dynasty made Bian its capital when it overthrew the Later Zhou in 960. Shortly afterwards, the city underwent further expansion. During the Song dyanasty, when it was known as Dongjing or Bianjing, Kaifeng had a population of over 400,000 living both inside and outside the city wall. Typhus was an acute problem in the city. The historian Jacques Gernet provides a lively picture of life in this period in his Daily Life in China on the Eve of the Mongol Invasion, 1250-1276, which often draws on Dongjing Meng Hua Lu, a nostalgic memoir of the city of Kaifeng.

Youguo Temple (Chinese: 佑國寺) was built northeast of Kaifeng, during the Song dynasty (960–1279 CE). The original temple was magnificent in scale with 280 halls and 24 monasteries. Kaifeng was the capital city during this time and the temple was an important place that the emperors of the dynasty visited often. The imperial examinations were held at the temple, and applicants from throughout the Chinese empire came to take civil service exams.

The temple’s original pagoda was a mammoth octagonal wooden tower of thirteen stories. It was designed and built by the eminent architect Yu Hao between 965–995 in the center of the monastery complex in a style that flourished in Chinese Buddhist temple architecture through the 11th century. The pagoda was considered by many of Yu Hao’s contemporaries to be a marvel of art. Unfortunately, the original widely admired structure burned down in 1044 after a lightning strike.

Under the order of Emperor Renzong of the Northern Song dynasty, a new pagoda was built in its place by 1049. It was designed to resemble the original wooden pagoda but built of glazed bricks so the tower would be fire-resistant and enduring. The new tower was dubbed the ‘Iron Pagoda’ due its iron-grey color when viewed from afar (its bricks are in fact glazed red, brown, blue, and green). It has survived the vicissitudes of war and floods to become the oldest landmark in this ancient city. Another Song-dynasty pagoda, Po Tower dating from 974, has been partially destroyed.

This octagonal-base structure stands at a current height of 186.56 feet (56.88 meters), with a total of 13 stories. It is a solid-core brick tower with an inner spiral stone staircase and outside openings to allow light and air flow. The architectural style features densely positioned, articulated dougong (斗拱, literally “cap [and] block” — a unique structural element of interlocking wooden brackets and one of the most important elements in traditional Chinese architecture) in the eaves (miyan) and multiple stories (louge). The exterior features more than fifty different varieties of glazed brick and 1,600 intricate and richly detailed carvings, including those of standing and sitting Buddha, standing monks, singers and flying dancers, flowers, lions, dragons and other legendary beasts as well as many fine engravings. Under the eaves are 104 bells that ring in the wind. The foundation rests in the silt of the Yellow River. Inside the Iron Pagoda are frescoes of classical Chinese tales, such as The Journey to the West.

Another well-known sight in the Youguo Temple complex was an astronomical clock tower of the engineer, scientist, and statesman Su Song (1020–1101 AD). It was crowned with a rotating armillary sphere that was hydraulically-powered (i.e. by water wheel and a water clock), yet it incorporated an escapement mechanism two hundred years before they were found in the clockworks of Europe and featured the first known endless power-transmitting chain drive.

Kaifeng reached its peak importance in the 11th century when it was a commercial and industrial center at the intersection of four major canals. During this time, the city was surrounded by three rings of city walls and probably had a population of between 600,000 and 700,000. It is believed that Kaifeng was the largest city in the world from 1013 to 1127.

This period ended in 1127 when the city fell to Jurchen invaders during the Jingkang Incident. It subsequently came under the rule of the Jurchen Jin dynasty, which had conquered most of North China during the Jin–Song Wars.[4] While it remained an important administrative center, only the city area inside the inner city wall of the early Song remained settled and the two outer rings were abandoned.

One major problem associated with Kaifeng as the imperial capital of the Song was its location. While it was conveniently situated along the Grand Canal for logistic supply, Kaifeng was militarily vulnerable due to its position on the floodplains of the Yellow River.

Kaifeng served as the Jurchen “southern capital” from 1157 (other sources say 1161) and was reconstructed during this time. The Jurchen kept their main capital further north until 1214 when they were forced to move the imperial court southwards to Kaifeng in order to flee from the onslaught of the Mongols. In 1232 they succumbed to the combined Mongol and Song forces in the Mongol siege of Kaifeng. The Mongols captured the city, and in 1279 they conquered all of China.

At the beginning of the Ming dynasty in 1368, Kaifeng was made the capital of Henan province. In 1642, Kaifeng was flooded by the Ming army with water from the Yellow River to prevent the peasant rebel Li Zicheng from taking over. After this disaster, the city was abandoned again. In 1662, during the reign of the Kangxi Emperor in the Qing dynasty, Kaifeng was rebuilt. However, further flooding occurred in 1841 followed by another reconstruction in 1843, which produced the contemporary Kaifeng as it stands today.

In 1847, the Yellow River overflowed its banks and the Youguo Temple collapsed, but the Iron Pagoda survived. Historically, the pagoda has experienced 38 earthquakes, six floods and many other disasters, but it remains intact after almost 1000 years.

On June 6, 1938, the city was occupied by the invading Japanese Imperial Army.

Kaifeng is also known for having the oldest extant Jewish community in China, the Kaifeng Jews. It also has a significant Muslim enclave and is notable for its many women’s mosques (nǚsì), including the oldest nǚsì in China: Wangjia Hutong Women’s Mosque, which dates to 1820. There are also some active Christian churches, like Sacred-Heart of Kaifang cathedral (开封耶稣圣心主教座堂).

Kaifeng remained the capital of Henan province until 1954, when it was moved to Zhengzhou.

In 1969, the former President of the People’s Republic of China, Liu Shaoqi, died from medical neglect while under house arrest in Kaifeng

There are currently about 5 million people living in its metropolitan area. Located along the southern bank of the Yellow River, it borders the provincial capital of Zhengzhou to the west, Xinxiang to the northwest, Shangqiu to the east, Zhoukou to the southeast, Xuchang to the southwest, and Heze of Shandong to the northeast. 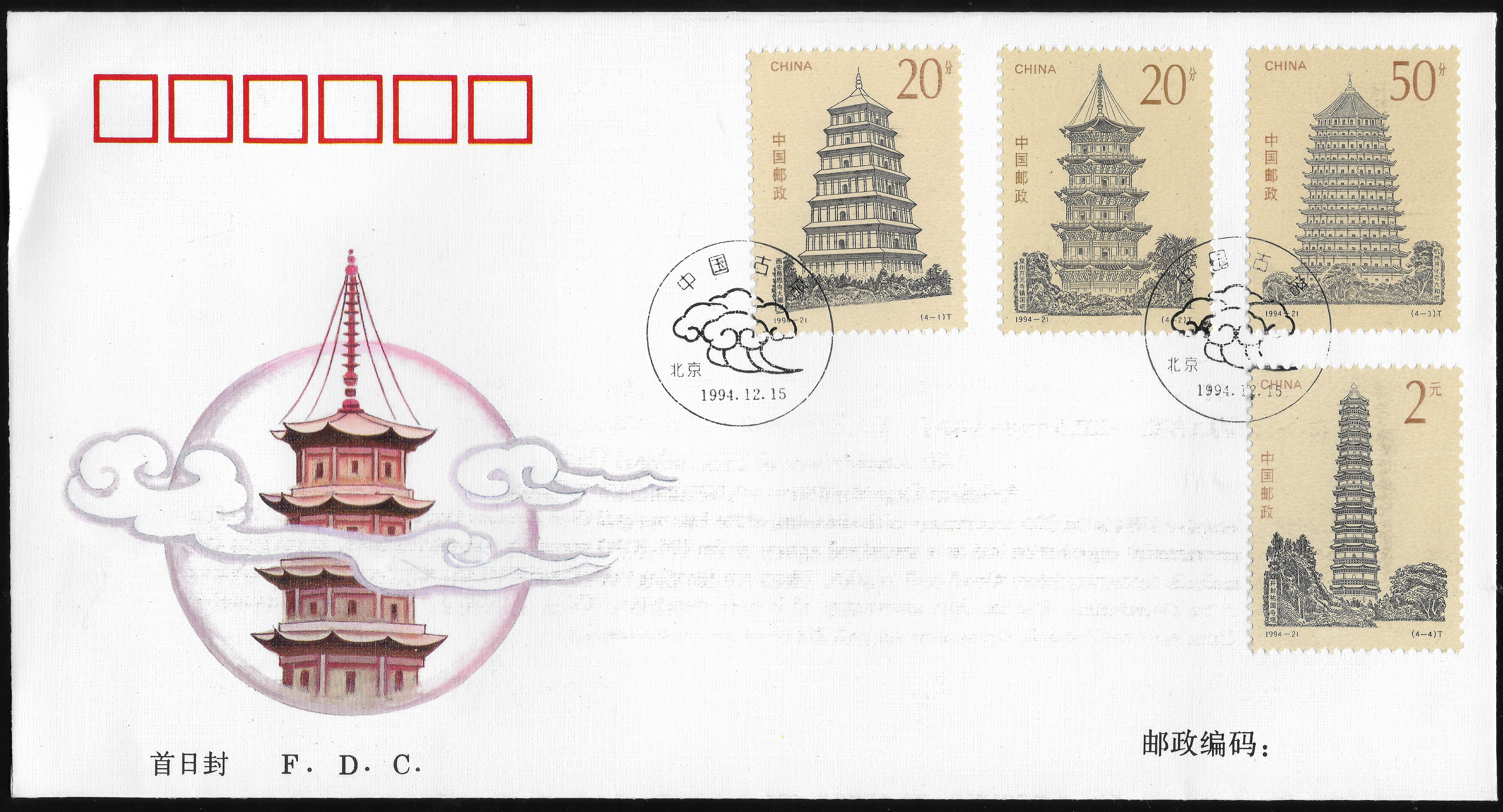 On December 15, 1994, China’s Ministry of Posts and Telecommunications released a set of four stamps portraying Ancient Pagodas of China. Printed using a combination of photogravure and engraving in the colors of brown, tan and black, the stamps are comb-perforated 11¼ x 11. Two stamps denominated at 20 分 (Chinese renminbi fēn) picture the Dayan Pagoda of Ci’en Temple in Xi’an (Scott #2545) and the Zhenguo Pagoda of Kaiyuan Temple in Quazhou (Scott #2546) while a single 50-分 stamp features the Liuhe Pagoda of Kaihua Temple in Hangzhou (Scott #2547). Scott #2548 picturing the Iron Pagoda has a denomination of 2 ¥ (Chinese renminbi yuan). There was also a souvenir sheet released at the same time containing each of the four stamps (Scott #2548a). This was sold for 5 ¥. 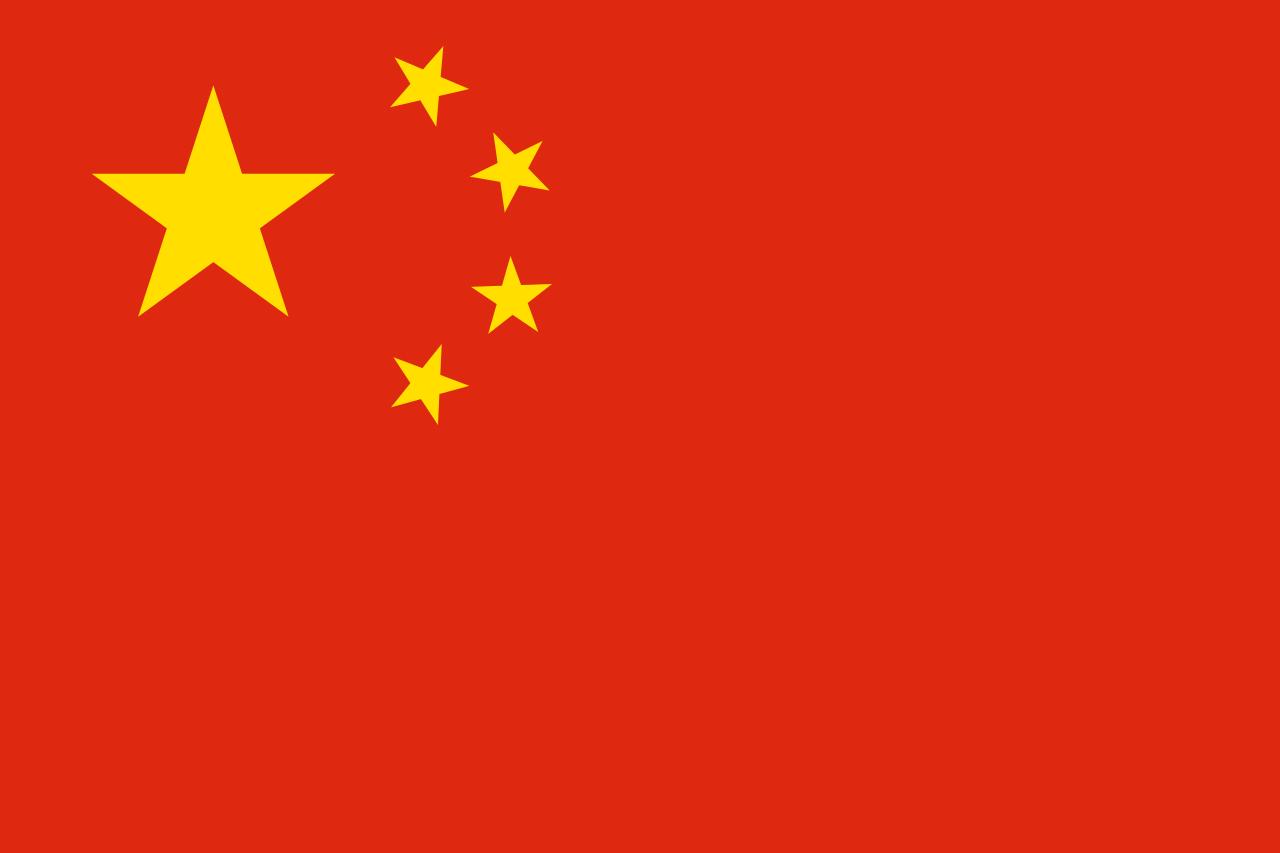 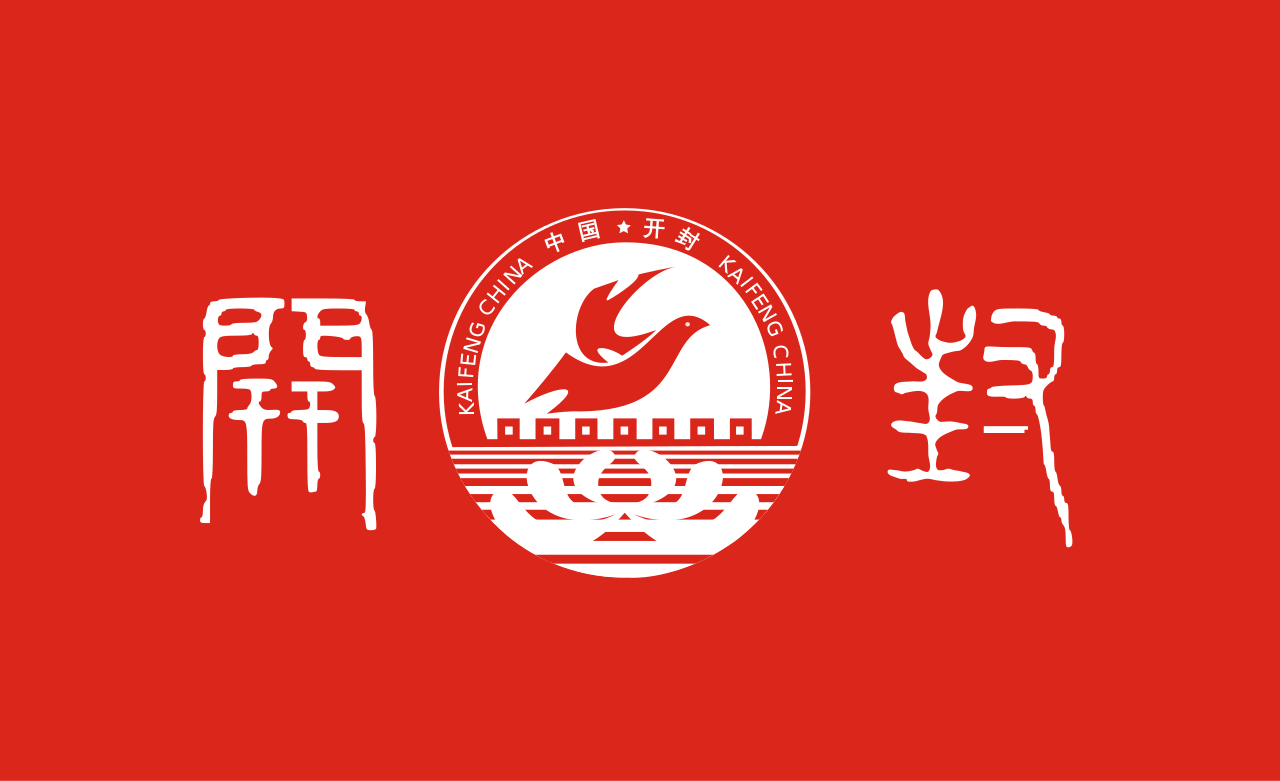 One thought on “The Iron Pagoda of Kaifeng”