St. Patrick’s Day puzzles me. I believe it is celebrated by more people than those who can actually claim some heritage with the Emerald Isle. Most of my childhood memories of the holiday involve me being pinched (hard!) by complete strangers and friends alike for my failure to wear green as I annually forgot the date. Despite living near Kansas City for much of my life from the age of 11½ until my thirties, I don’t recall ever having attended what is one of the longest-running St. Patrick’s Day parades in the United States (established in 1873). I have never drank a green beer or one of the famous Shamrock Shakes from McDonald’s. I didn’t count green as a color I particularly liked until relatively recently; now, certain darker hues of it are at the top of my favorites, right below purple and gold.

However, I have accumulated many covers over the years bearing St. Patrick’s Day postmarks and cachets, many from U.S. Navy ships and a significant amount from the tiny community of St. Patrick, Missouri, which I can recall visiting on one of our wild excursions around the state and from which I still have a postcard bearing the postmark and green cachet applied at the Shrine of St. Patrick. Over the past eight or nine months, I have also gathered a significant number of stamps (all from Ireland except for one from Grenada’s Grenadines — of course) marking the holiday.  I am still missing the very first St. Patrick’s Day set, issued by Ireland in 1937, as it is a bit more expensive. The only differences between the 1937 set and the 1943-1945 set is a change in watermarks (se in a monogram versus multiple e‘s); a set of Scott #96-98 mint, never hinged (MNH) is valued at USD $700 and $290 well-centered used in my copy of the Scott catalogue while #121-123 is valued at USD $33.75 and $15.50 in the same conditions. I am also missing a couple of the later issues.

As defined by Wikipedia, Saint Patrick’s Day, or the Feast of Saint Patrick (Lá Fhéile Pádraig, “the Day of the Festival of Patrick” in Irish), is a cultural and religious celebration held on March 17, the traditional death date of Saint Patrick (circa AD 385–461), the foremost patron saint of Ireland.

Saint Patrick’s Day was made an official Christian feast day in the early 17th century and is observed by the Catholic Church, the Anglican Communion (especially the Church of Ireland), the Eastern Orthodox Church, and the Lutheran Church. The day commemorates Saint Patrick and the arrival of Christianity in Ireland, and celebrates the heritage and culture of the Irish in general. Celebrations generally involve public parades and festivals, céilís, and the wearing of green attire or shamrocks. Christians who belong to liturgical denominations also attend church services and historically the Lenten restrictions on eating and drinking alcohol were lifted for the day, which has encouraged and propagated the holiday’s tradition of alcohol consumption.

Saint Patrick’s Day is a public holiday in the Republic of Ireland, Northern Ireland, the Canadian province of Newfoundland and Labrador (for provincial government employees), and the British Overseas Territory of Montserrat. It is also widely celebrated by the Irish diaspora around the world, especially in the United Kingdom, Canada, United States, Brazil, Argentina, Australia and New Zealand. Saint Patrick’s Day is celebrated in more countries than any other national festival. Modern celebrations have been greatly influenced by those of the Irish diaspora, particularly those that developed in North America. However, there has been criticism of Saint Patrick’s Day celebrations for having become too commercialized and for fostering negative stereotypes of the Irish people.

Patrick was a 5th-century Romano-British Christian missionary and bishop in Ireland. Much of what is known about Saint Patrick comes from the Declaration, which was allegedly written by Patrick himself. It is believed that he was born in Roman Britain in the fourth century, into a wealthy Romano-British family. His father was a deacon and his grandfather was a priest in the Christian church. According to the Declaration, at the age of sixteen, he was kidnapped by Irish raiders and taken as a slave to Gaelic Ireland. It says that he spent six years there working as a shepherd and that during this time he “found God”. The Declaration says that God told Patrick to flee to the coast, where a ship would be waiting to take him home. After making his way home, Patrick went on to become a priest.

According to tradition, Patrick returned to Ireland to convert the pagan Irish to Christianity. The Declaration says that he spent many years evangelising in the northern half of Ireland and converted “thousands”. Patrick’s efforts against the druids were eventually turned into an allegory in which he drove “snakes” out of Ireland, despite the fact that snakes were not known to inhabit the region.

Tradition holds that he died on March 17 and was buried at Downpatrick. Over the following centuries, many legends grew up around Patrick and he became Ireland’s foremost saint.

Celebrations generally involve public parades and festivals, Irish traditional music sessions (céilithe), and the wearing of green attire or shamrocks. There are also formal gatherings such as banquets and dances, although these were more common in the past. St Patrick’s Day parades began in North America in the 18th century but did not spread to Ireland until the 20th century. The participants generally include marching bands, the military, fire brigades, cultural organizations, charitable organizations, voluntary associations, youth groups, fraternities, and so on. However, over time, many of the parades have become more akin to a carnival. More effort is made to use the Irish language, especially in Ireland, where the week of St Patrick’s Day is “Irish language week”.

Since 2010, famous landmarks have been lit up in green on St Patrick’s Day as part of Tourism Ireland’s “Global Greening Initiative” or “Going Green for St Patrick´s Day”. The Sydney Opera House and the Sky Tower in Auckland were the first landmarks to participate and since then over 300 landmarks in fifty countries across the globe have gone green for St Patricks day.

Christians may also attend church services, and the Lenten restrictions on eating and drinking alcohol are lifted for the day. Perhaps because of this, drinking alcohol — particularly Irish whiskey, beer, or cider — has become an integral part of the celebrations. The St Patrick’s Day custom of “drowning the shamrock” or “wetting the shamrock” was historically popular, especially in Ireland. At the end of the celebrations, a shamrock is put into the bottom of a cup, which is then filled with whiskey, beer, or cider. It is then drunk as a toast to St Patrick, Ireland, or those present. The shamrock would either be swallowed with the drink or taken out and tossed over the shoulder for good luck.

On St Patrick’s Day, it is customary to wear shamrocks, green clothing or green accessories. St Patrick is said to have used the shamrock, a three-leaved plant, to explain the Holy Trinity to the pagan Irish. This story first appears in writing in 1726, though it may be older. In pagan Ireland, three was a significant number and the Irish had many triple deities, a fact that may have aided St Patrick in his evangelization efforts. Patricia Monaghan says there is no evidence that the shamrock was sacred to the pagan Irish. However, Jack Santino speculates that it may have represented the regenerative powers of nature, and was recast in a Christian context‍ —‌ icons of St Patrick often depict the saint “with a cross in one hand and a sprig of shamrocks in the other”. Roger Homan writes, “We can perhaps see St Patrick drawing upon the visual concept of the triskele when he uses the shamrock to explain the Trinity”.

The first association of the color green with Ireland is from the 11th century pseudo-historical book Lebor Gabála Érenn (The Book of the Taking of Ireland), which forms part of the Mythological Cycle in Irish Mythology and describes the story of Goídel Glas who is credited as the eponymous ancestor of the Gaels and creator of the Goidelic languages (Irish, Scottish Gaelic, Manx). In the story Goídel Glas, who was the son of Scota and Niul, was bitten by a snake and was saved from death by Moses placing his staff on the snakebite. As a reminder of the incident he would retain a green mark that would stay with him and he would lead his people to a land that would be free of snakes. This is emphasized in his name Goídel which was anglicized to the word Gaelic and Glas which is the Irish word for green.

Another story from the Lebor Gabála Érenn written after the adventures of Goídel Glas refers to Íth climbing the tower (in reference to the Tower of Hercules) his father Breogán builds in Brigantia (modern day Corunna in Galicia, Spain) on a winters day and is so captivated by the sight of a beautiful green island in the distance that he must set sail immediately. This story also introduces three national personifications of Ireland, Banba, Fódla and Ériu. The color green was further associated with Ireland from the 1640s, when the green harp flag was used by the Irish Catholic Confederation. Green ribbons and shamrocks have been worn on St Patrick’s Day since at least the 1680s.

The Friendly Brothers of St Patrick, an Irish fraternity founded in about 1750, adopted green as its color. However, when the Order of St. Patrick — an Anglo-Irish chivalric order — was founded in 1783 it adopted blue as its color, which led to blue being associated with St Patrick. During the 1790s, green would become associated with Irish nationalism, due to its use by the United Irishmen. This was a republican organization — led mostly by Protestants but with many Catholic members — who launched a rebellion in 1798 against British rule.

The phrase “wearing of the green” comes from a song of the same name, which laments United Irishmen supporters being persecuted for wearing green. The late nineteenth and early twentieth centuries have seen the re-emergence of Irish cultural symbols, such as the Irish Language, Irish mythology, and the color green, through the Gaelic Revival and the Irish Literary Revival which served to stir Irish nationalist sentiment. The influence of green was more prominently observable in the flags of the 1916 Easter Rising such as the Sunburst flag, the Starry Plough Banner, and the Proclamation Flag of the Irish Republic which was flown over the General Post Office, Dublin together with the Irish Tricolour. Throughout these centuries, the color green and its association with St Patrick’s Day grew.

The wearing of the ‘St Patrick’s Day Cross’ was also a popular custom in Ireland until the early 20th century. These were a Celtic Christian cross made of paper that was “covered with silk or ribbon of different colors, and a bunch or rosette of green silk in the center”.

Ireland released three stamps (Scott #96-98) on September 8, 1937 depicting St. Patrick and the Paschal Fire, a sacred flame representing the light of Christ coming into the world. This represents the risen Christ, as a symbol of light (life) dispelling darkness (death). These bore a Gaelic se watermark on cream paper and were perforated 14 x 15. The 2-shilling 6-pence stamp is printed in bright green (“emerald green” as per the Stanley Gibbons catalogues), the 5-shilling is brown violet (SG, maroon), nd the 10-shilling high value is dark blue (deep blue). The Stanley Gibbons catalogue lists inverted watermarks for each value.

You may view quite a few more stamps and covers in my Flickr album for St. Patrick’s Day and I featured a few covers and a postcard from St. Patrick, Missouri, on my postcard blog earlier today. 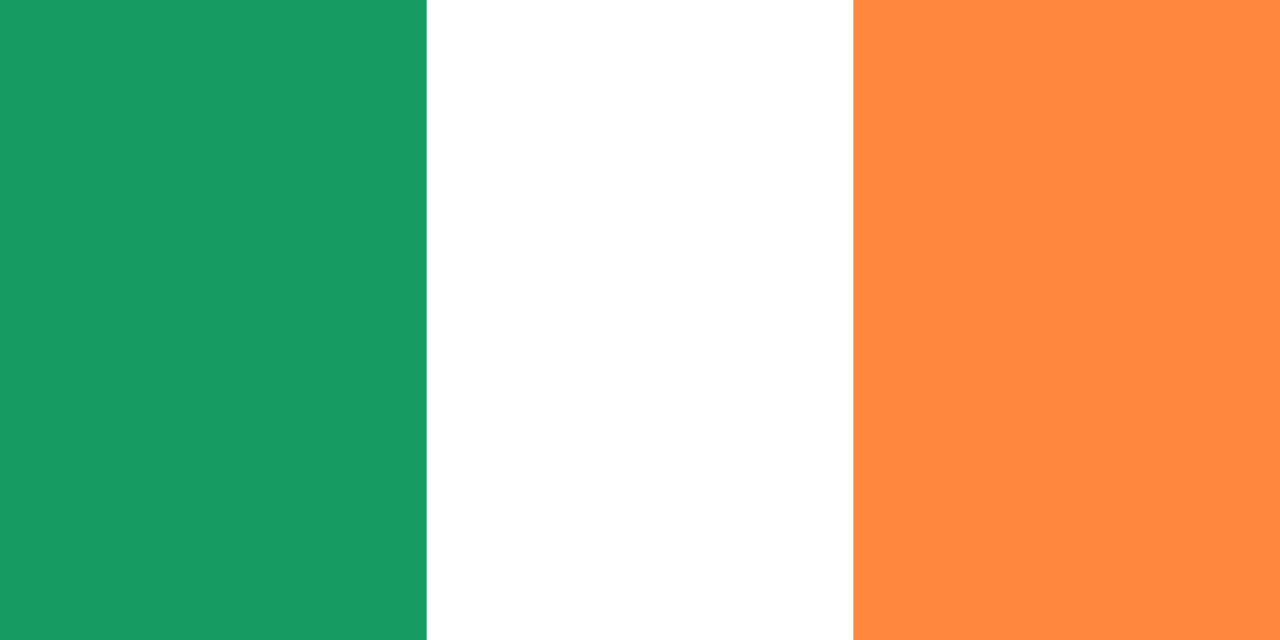 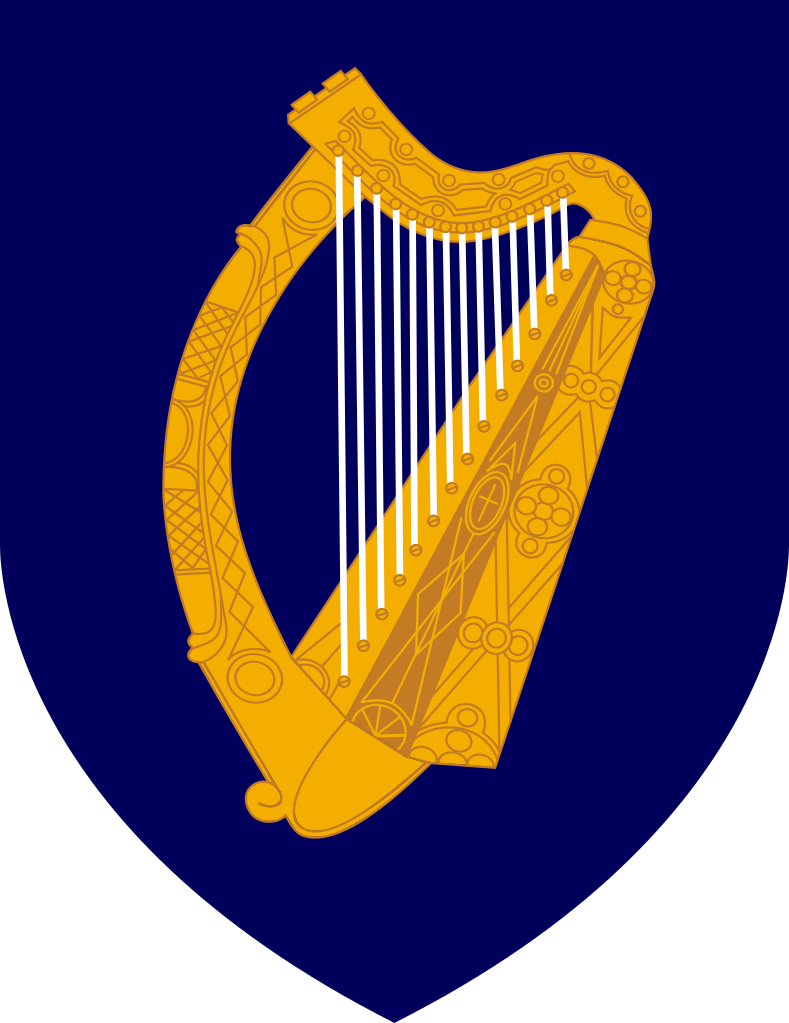 One thought on “St. Patrick’s Day”