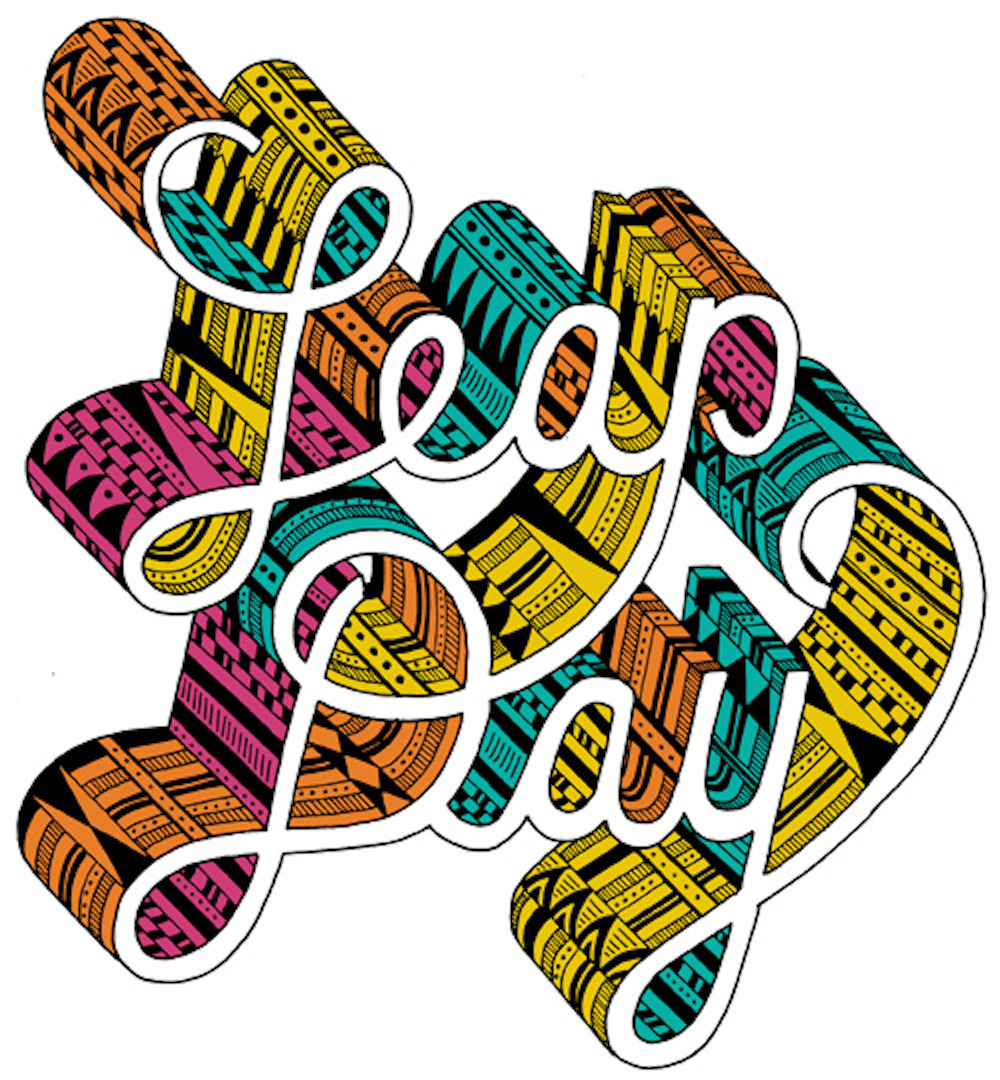 It has been a very busy couple of months for me and I will be relieved when the Thai school year comes to an end during the first half of March.  Today, I even have yet another working day rather than a holiday (of which I only had one during the entire month of February and two in January), While I have forced myself to rise way before dawn most days in order to keep my Stamps of 2020 project from getting too far behind over on Philatelic Pursuits, my other blogs have suffered, A Stamp A Day has become A Stamp A Month….

February 29, also known as Leap Day or Leap Year Day, is a date added to most years that are divisible by 4, such as 2016, 2020, and 2024. A leap day is added in various solar calendars (calendars based on the Earth’s revolution around the Sun), including the Gregorian calendar standard in most of the world. Lunisolar calendars (whose months are based on the phases of the Moon) instead add a leap or intercalary month.

onger than 365 whole days. A leap day compensates for this lag, realigning the calendar with the Earth’s position in the Solar System; otherwise, seasons would occur later than intended in the calendar year. The Julian calendar used in Christendom until the 16th century added a leap day every four years; but this rule adds too many days (roughly three every 400 years), making the equinoxes and solstices shift gradually to earlier dates. By the 16th century the vernal equinox had drifted to March 11, and the Gregorian calendar was introduced both to shift it back by omitting several days, and to reduce the number of leap years via the aforementioned century rule to keep the equinoxes more or less fixed and the date of Easter consistently close to the vernal equinox.

Leap days can present a particular problem in computing known as the Leap Year Bug, when February 29 is not handled correctly in logic that accepts or manipulates dates.

A person born on February 29 may be called a “leapling”, a “leaper”, or a “leap-year baby”. In non-leap years, some leaplings celebrate their birthday on either February 28 or March 1, while others only observe birthdays on the authentic intercalary date, February 29.

The effective legal date of a leapling’s birthday in non-leap years varies between jurisdictions.

In England and Wales or in Hong Kong, a person born on February 29 will have legally reached 18 years old on March 1. If they were born in Taiwan they legally become 18 on February 28, a day earlier.

In the United States, according to John Reitz, a professor of law at the University of Iowa, there is no “… statute or general rule that has anything to do with leap day.” Reitz speculates that “March 1 would likely be considered the legal birthday in non-leap years of someone born on leap day,” using the same reasoning as described for the United Kingdom and Hong Kong. However, for the purposes of Social Security, a person attains the next age the day before the anniversary of birth. Therefore, Social Security would recognize February 28 as the change in age for leap year births, not March 1.

There are many instances in children’s literature where a person’s claim to be only a quarter of their actual age turns out to be based on counting only their leap-year birthdays.

A similar device is used in the plot of Gilbert and Sullivan’s 1879 comic opera The Pirates of Penzance: as a child, Frederic was apprenticed to a band of pirates until his 21st birthday. Having passed his 21st year, he leaves the pirate band and falls in love. However, since he was born on February 29, his 21st birthday will not arrive until he is eighty-eight (since 1900 was not a leap year), so he must leave his fiancée and return to the pirates. 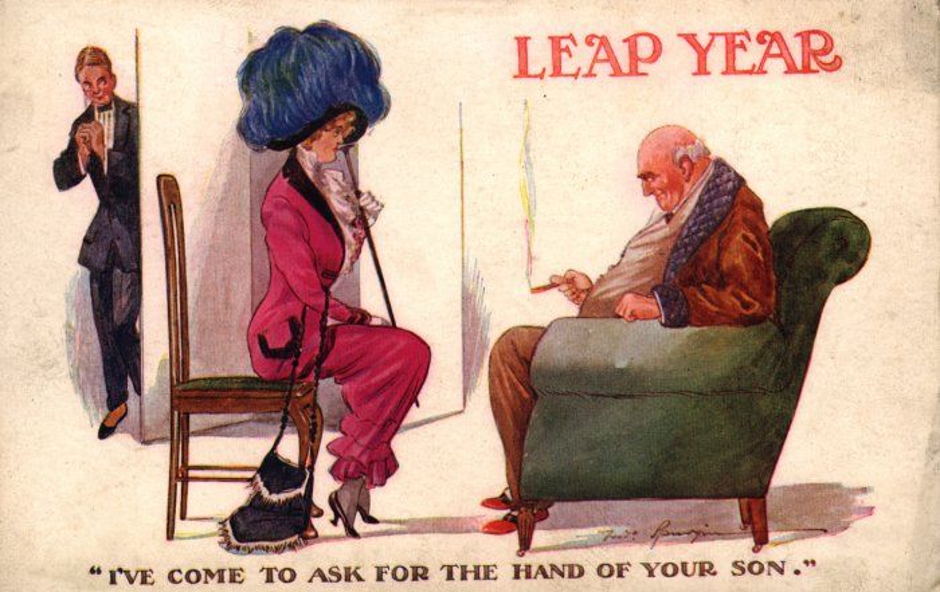 There is a popular tradition known as Bachelor’s Day in some countries allowing a woman to propose marriage to a man on February 29. If the man refuses, he then is obliged to give the woman money or buy her a dress. In upper-class societies in Europe, if the man refuses marriage, he then must purchase 12 pairs of gloves for the woman, suggesting that the gloves are to hide the woman’s embarrassment of not having an engagement ring. In Ireland, the tradition is supposed to originate from a deal that Saint Bridget struck with Saint Patrick.

In the town of Aurora, Illinois, single women are deputized and may arrest single men, subject to a four-dollar fine, every February 29.

In Greece, it is considered unlucky to marry on a leap day.

A few days ago, I began to think of a topic for an ASAD article and quickly realized that the upcoming Leap Day would be a good one to explore.  While there have been stamps issued on February 29 (see below for a nice video slideshow by Phila Digest showcasing a number of these), I have found none that specifically address either Leap Day or Leap Year. There are numerous stamps illustrating calendars but those in my collection all seem to be Mayan or Oriental Lunar calendars which doesn’t fit the subject matter.

Collecting covers and postcards with February 29 postmarks can be an interesting pursuit as an article published by Linn’s Stamp News in 2016 illustrates. An extensive thread started on the Stamp Community online forum around the same time covers this subject matter as well.

I finally hit upon the idea of using a stamp prominently displaying the number “29“, easy but daunting given the number of 29-cent stamps from the United States sitting in my collections (the vast majority on first day covers). I decided that most deserved a dedicated article based on their own subject matter (earmarked for upcoming ASAD blog entries include Buffalo Bill Cody, Kit Carson, Norman Rockwell, and several World War II commemoratives), leaving others that don’t mark any specific subject matter.  It is not the right season for Holiday stamps and those showing the U.S. Flag are just too obvious, it comes down to an Official Mail coil (Scott #O145) released on May 24, 1991, in Seattle, Washington. It was printed in red, blue and black using offset lithography and is perforated 10 vertically. 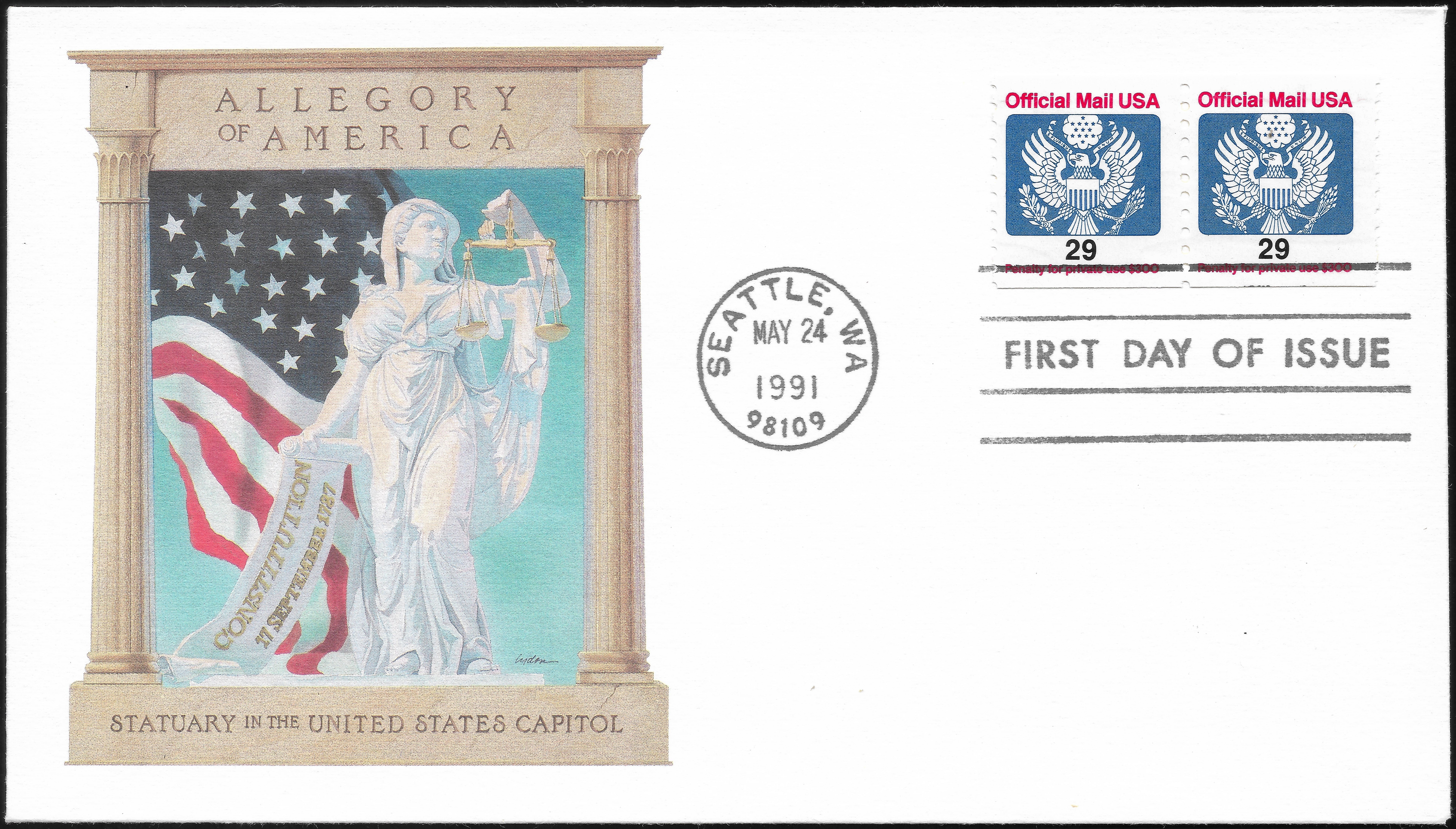