My posts on A Stamp A Day tend to be detailed and accompanied by a number of images in an attempt to provide a one-stop reference for the subject portrayed on the featured stamp.

Not so today. The mere image of the stamp or reading the title of the entry is enough in this case.  The coronavirus COVID-19 is the one topic everyone throughout the world has knowledge of. It is also a subject about which the information changes daily, sometimes hourly or even more often than that.

Differing measures have been undertaken in each nation (and sometimes within each state, province or prefecture of a single nation) in order to prevent and contain its spread. Some have had mild successes, while others have been complete disasters.

On my own little corner of the planet — namely Phuket, Thailand — we have just begun what is expected to be a month-long lockdown as the provincial governor is taking measures beyond what the Thai prime minister has done. Our land and water borders are sealed (Phuket is an island with mainland access via one bridge at the north end or via maritime transport) and the airport is set to follow on 10 April, legally needing time to alert the aviation authorities.  All of our world-class beaches are closed as are nearly every business.  There is food delivery and we can go on “essential” errands but not between the hours of 8:00 pm and 3:00 am.

My usual first point of reference when preparing ASAD articles is Wikipedia.  The page on this pandemic is already extremely lengthy even before an end to the crisis is in sight.

The stamp collecting community has bonded, as have other groups of hobbyists and like-minded individuals. Many interesting resources have been made available online and philatelic-related social media has become quite plentiful.

There have been disruptions in worldwide mail delivery and some nations have complete shut down their postal systems.  The postal carriers that are still operating are doing so at great risk to themselves, much like medical personnel as well as police and fire officers. In a few places around the world, residents are paying tribute to the postal workers by doing small things to cheer them up.  I have seen a few images from Great Britain of “thank you” messages left on the outside of homes.  Thailand Post is offering free postage to send postcards to loved ones, medical personnel, and the mail carriers.

Of course, it will be quite some time before the full impact of the COVID-19 pandemic will have on future stamp issues becomes known. Some have already been postponed, some have been issued without an associated dedication ceremony. Printing presses for stamp production have largely shut down throughout the world.

Iran became the first nation to issue a coronavirus-related stamp on 17 March,  China has been preparing an issue for at least one month now with three different design proposals having been leaked to the Internet; a release date is now set for 7 April with the caveat that the issue is to be a gift for doctors and nurses with very few available for the general public. A design for a stamp by Sri Lanka has also been shared online but it is unknown when or if this will be released. 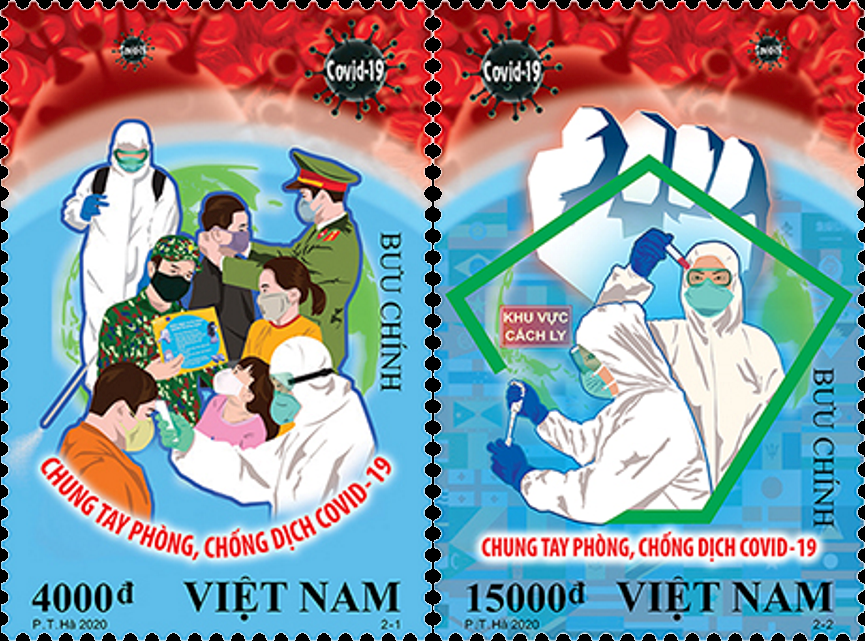 Vietnam releases two designs today (31 March 2020) under the title of “Prevention and Control of the Coronavirus Covid-19” in denominations of 4000 dong and 15,000 dong. The lower value depicts several people helping each other against the virus including a soldier delivering a package to a medical worker, two HAZMAT suit-clad doctors, one of which is using a thermal thermometer to take a citizen’s temperature and a high-ranking official conferring with another individual. The higher value stamp shows two medical scientists checking test results against a backdrop of a fist designed to represent the determination to push back COVID-19 transmission.

The stamps were designed by Mr. Pham Trung Ha and printed using offset lithography by the Post Stamp Printing Company in sheets of 25. As is common with most stamps issued by Vietnam, these are available in several different varieties.  The standard release is perforated 13 with just 6,000 of each stamp printed (a total of 12,000 sets). There were also 3,500 pairs of imperforate stamps available for sale as well as 2,600 pairs of both perforated and imperforate stamps sold with a SPECIMEN overprint.  There is also a stamp book (format unknown at this time) as well as first day covers and maximum cards (available with each of the various varieties).

Despite the number of varieties, the quantities were extremely limited while demand was predictably high. Many dealers in Vietnam itself scrambled to secure copies for their customers. I was very fortunate to receive word that a set of “one of each” would be sent to me.  However, with the lockdown I might not receive the actual stamps until May!  I intend this to be the start of a new topical collection.