Bon Om Touk (បុណ្យអុំទូក in Khmer), or the Cambodian Water Festival, is celebrated each year to mark the reversal of the flow of the Tonle Sap River. Visitors from every town and province travel to Phnom Penh to watch boat races along the Sisowath Quay and attend free concerts in the evenings. For three days, workers from every province join with the city’s residents to celebrate the end of the country’s rainy season, as well as the change in flow of the Tonle Sap River. The festival includes boat races and concerts, and attracts several million people each year. In 2019, Bon Om Touk will occur from November 10-12. The full official name is Bon Om Touk Bondet Bratip Ork OMBOK ning Sompeah Preah Kher (បុណ្យអុំទូកបណ្ដែតប្រទីប អកអំបុក និង សំពះព្រះខែ).

The Royal Water Festival is believed to have been held from the ancient times during the reign of Jayavarman VII in 1181 AD to commemorate the heroic examples of the Khmer Navy who liberated their land from oppression by their enemies from the Kingdom of Champa. The battles were held aboard boats on Tonle Sap. A number of boat carvings can be found in the temples of Banteay Chhmar and in the temple of Bayon. Kinds of boats included the Makara boat, the Naga boat, the Naga five boats, the elephant boat, the crocodile boats, the Hanuman Boat Riding Giant and the Sovanmachha boat or Mermaid boats. 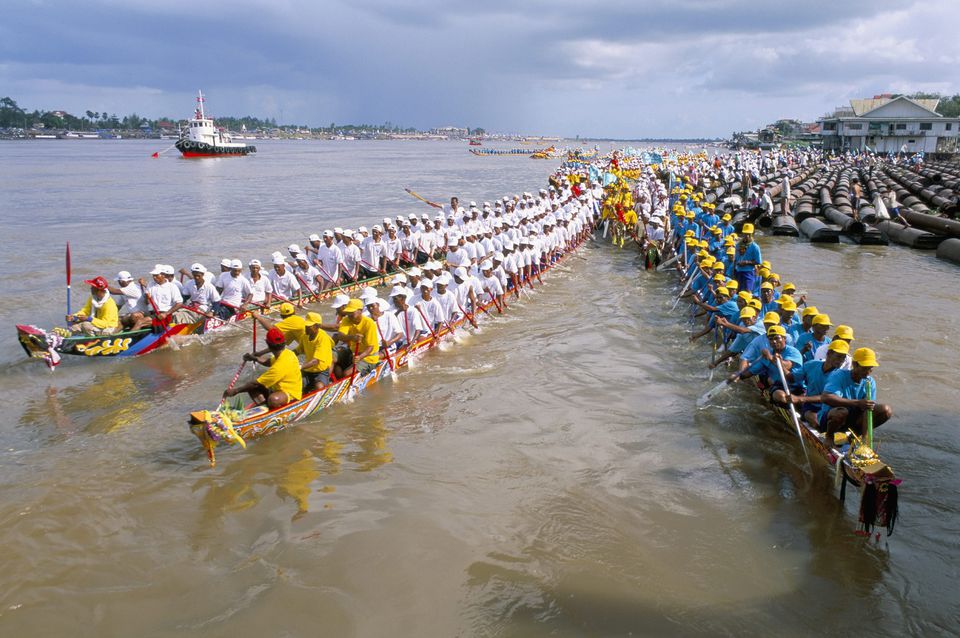 Phnom Penh resumed Water Festival celebrations in 1990, following a 20-year break under the Lon Nol regime and then the genocidal Khmer Rouge. A few of Phnom Penh’s many foreign residents started participating in the featured boat races in the mid-1990s, though in the first year of participation their boat capsized, along with two other teams, in the wake of a larger ship. In 2008, five rowers drowned and a single rower drowned in 2009 during the boat races.

The celebration turned tragic on November 22, 2010, when thousands became trapped and stampeded off the bridge between Phnom Penh and Diamond Island, killing 351 people and upwards of 755 more were injured, some seriously. Rumors spread that it was caused by fear of a coming storm or electrical shock from faulty wiring, and authorities ultimately laid blame on the swaying of the bridge. 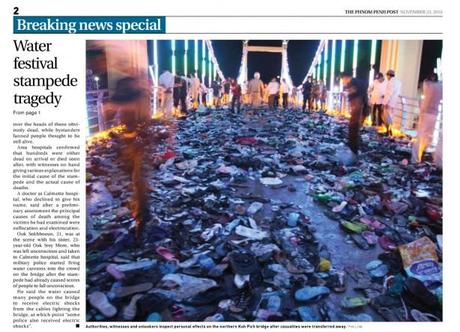 The stampede began at 21:30 local time (14:30 UTC) on a bridge across the river, though witnesses said that people had been “stuck on the bridge” for several hours before, and victims were not freed until hours after the actual stampede occurred. Many local hospitals were pushed far beyond capacity by the influx of victims. At one point, the death toll had been listed as being 456, but on November 25, the government decreased its official death toll to 347, based on the total put forth by Cambodian minister of social affairs Ith Sam Heng.

A witness said the cause of the stampede was “too many people on the bridge and…both ends were pushing. This caused a sudden panic. The pushing caused those in the middle to fall to the ground, then [get] crushed.” While trying to get away from the stampede, he said that people pulled down electrical wires, causing more people to die of electrocution. These claims were backed up by one of the doctors treating patients, who said that electrocution and suffocation were the primary causes of death among the casualties, though the government disputed the claims of electric shock. A journalist from The Phnom Penh Post said that the stampede had occurred due to police forces firing a water cannon into people on the bridge in an attempt to force them to move off the bridge after it began swaying, which had triggered panic among those on it. Information Minister Khieu Kanharith said that the stampede began when panic broke out after several people fell unconscious on the crowded island. 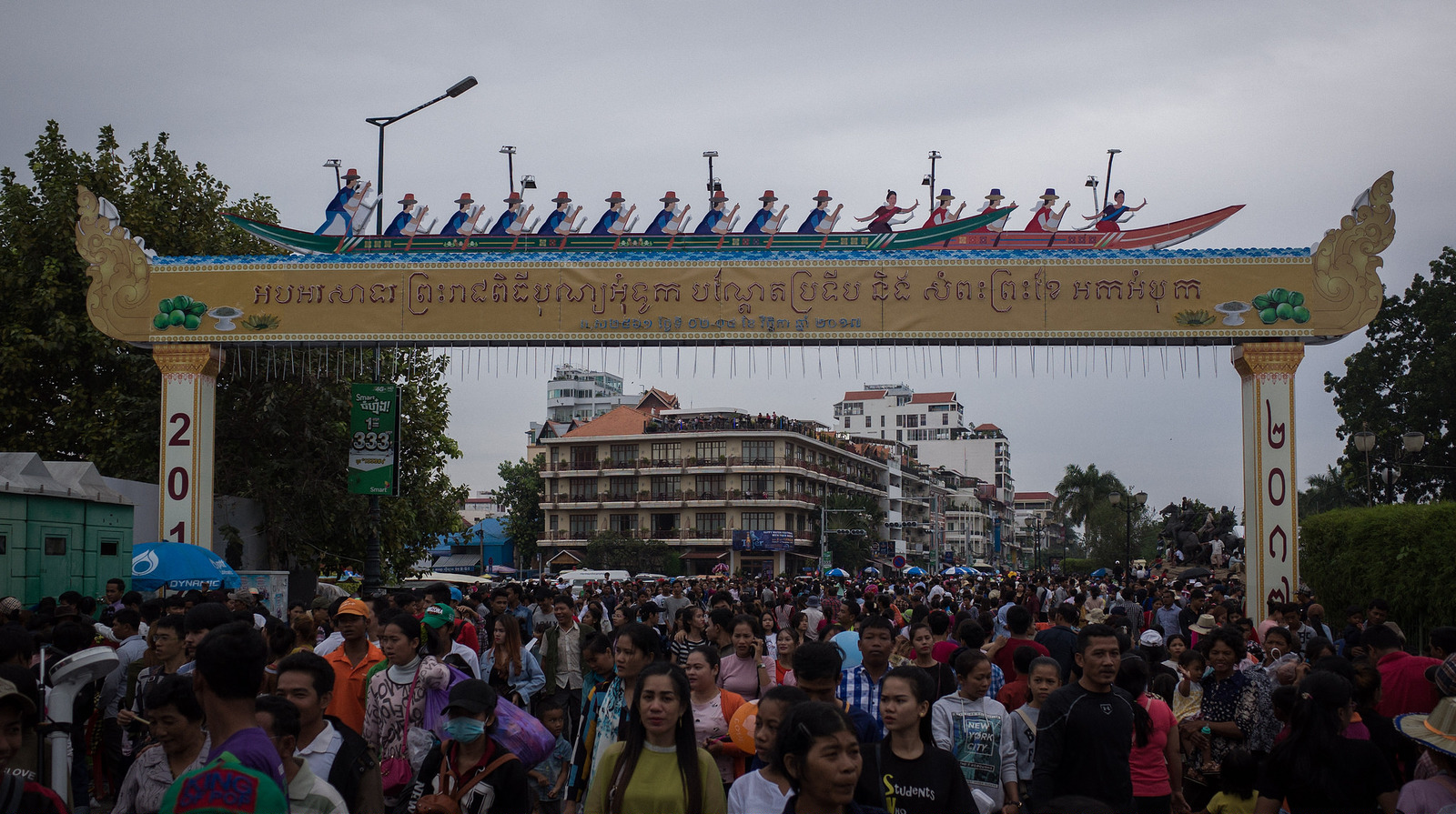 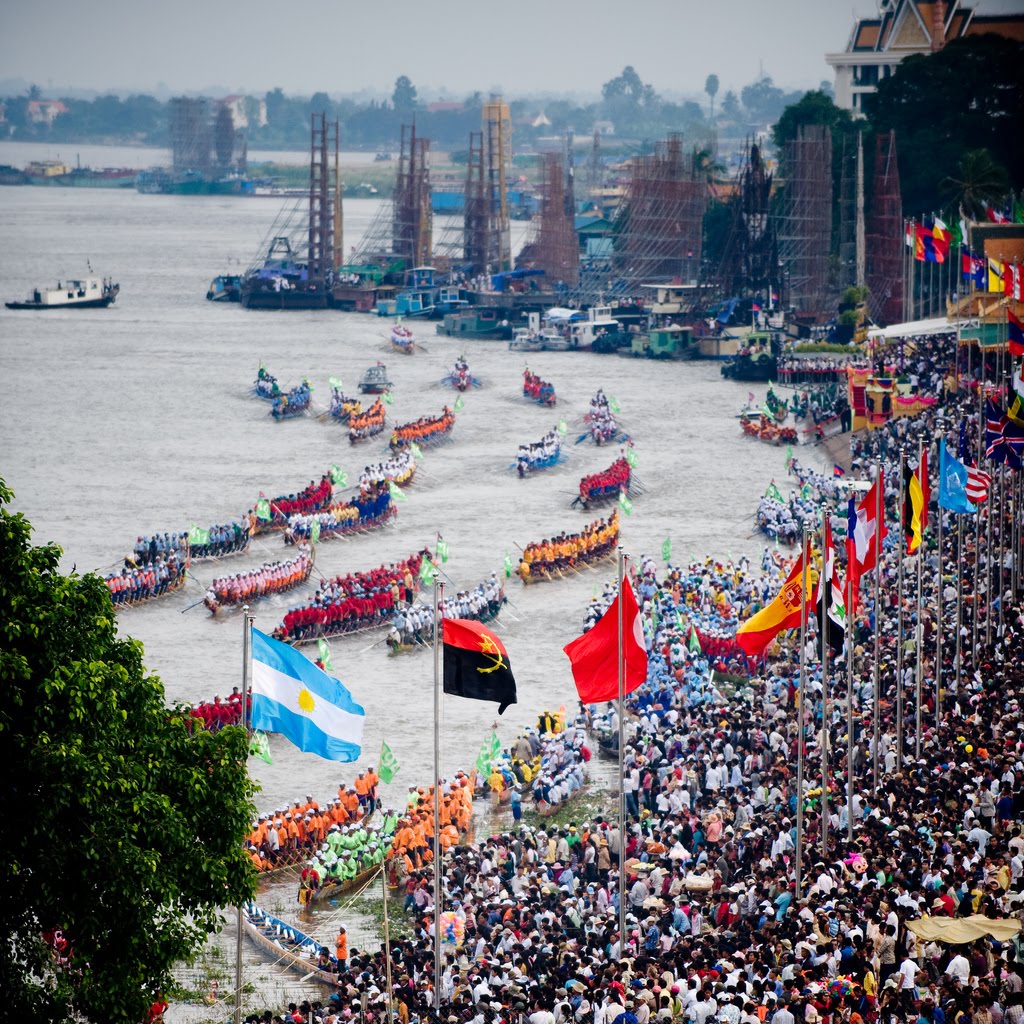 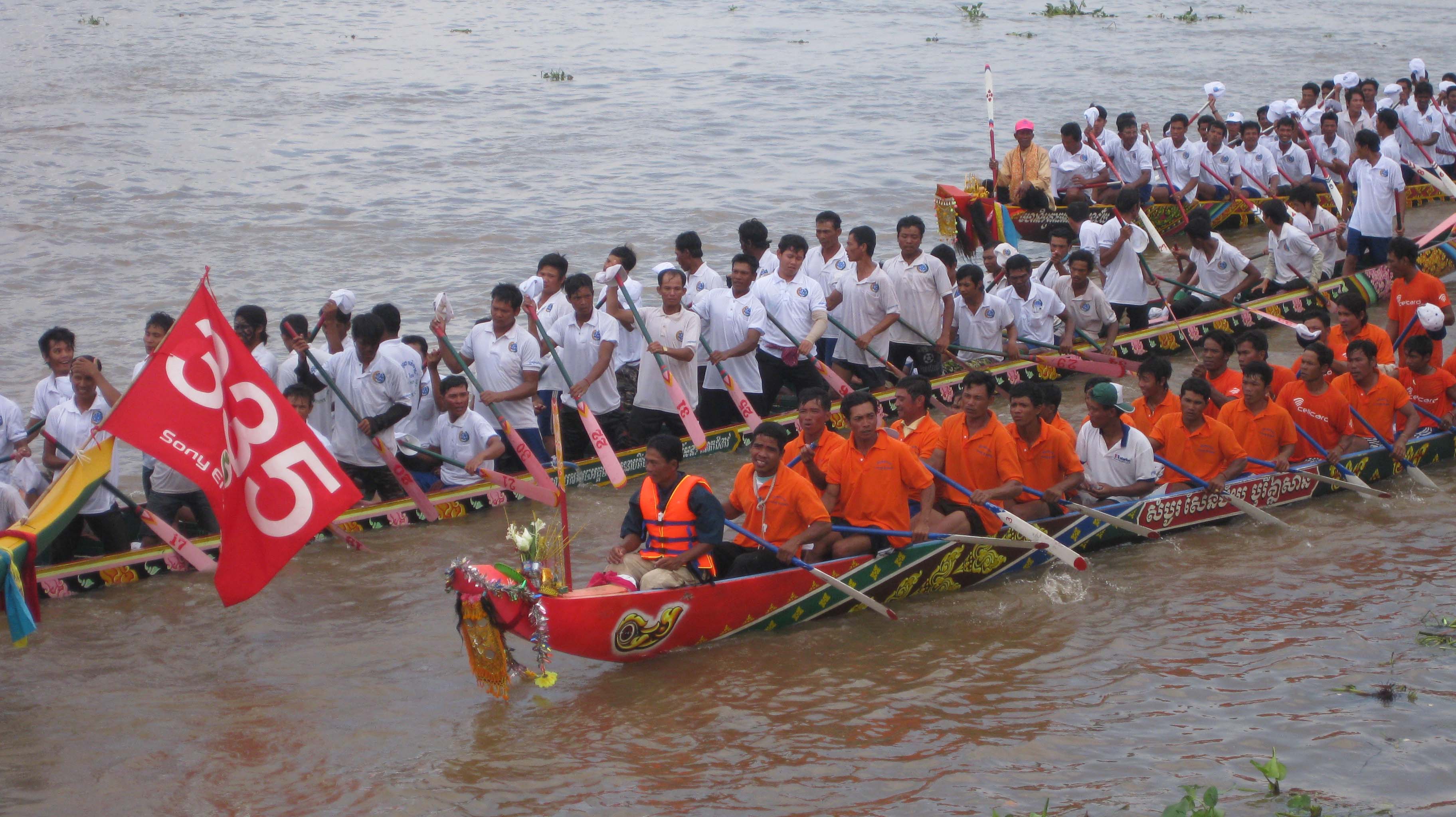 Cambodian Prime Minister Hun Sen said that “with this miserable event, I would like to share my condolences with my compatriots and the family members of the victims.” He ordered an inquiry to be conducted in response to the incident, and declared November 25 to be a day of mourning. The government said that the investigation would be conducted by a special committee that would take evidence and testimony from witnesses to the incident. The preliminary reports of the investigation, released on November 24, said that the stampede had been triggered by the swaying of the bridge, which had caused panic among many of those on it.

The government said that it would pay five million riel, or U.S. $1,250, to the families of each of the dead, as well as paying a million riel ($250) to each of the injured. On November 24, the government announced it planned to construct a stupa as a memorial to those killed in the incident. On November 23, the day after the incident, around 500 Buddhist monks visited the site of the stampede to chant prayers for those who had died.

Phnom Penh authorities came under fire in 2016 for sanitation, after videos of cleaning crews sweeping trash into the Tonle Sap incited anger on social media.

As I count down to post #1000 on A Stamp A Day, I am trying to highlight stamp-issuing entities that have not been featured as often as the United States, Thailand, Great Britain or Germany. Some of my neighboring countries such as Myanmar/Burma, Laos and Cambodia have been rather neglected mainly due to my not having very many stamps from two of these locations. In fact, all of my stamps from the region to our west are colonial definitives. It is time to find a trading partner in Myanmar, I think. I have quite a few stamps from the region currently known as the Kingdom of Cambodia (ព្រះរាជាណាចក្រកម្ពុជា — Prĕəh Riəciənaacak Kampuciə — in Khmer, or Royaume du Cambodge in French). There have been two articles about stamps issued under the name of French Indochina, two as the People’s Republic of Kampuchea,  but only one stamp has previously been featured from the Kingdom of Cambodia and that was in October 2016. Thus, this was the first folder I searched in when trying to find a stamp for today, a “random stamp day”. Scott #1997 was the lowest denomination stamp (500 riel) in a set of three issued on June 1, 2000, promoting tourism in general and the Cambodian Water Festival in particular. These were printed using offset lithography and comb-perforated 13. 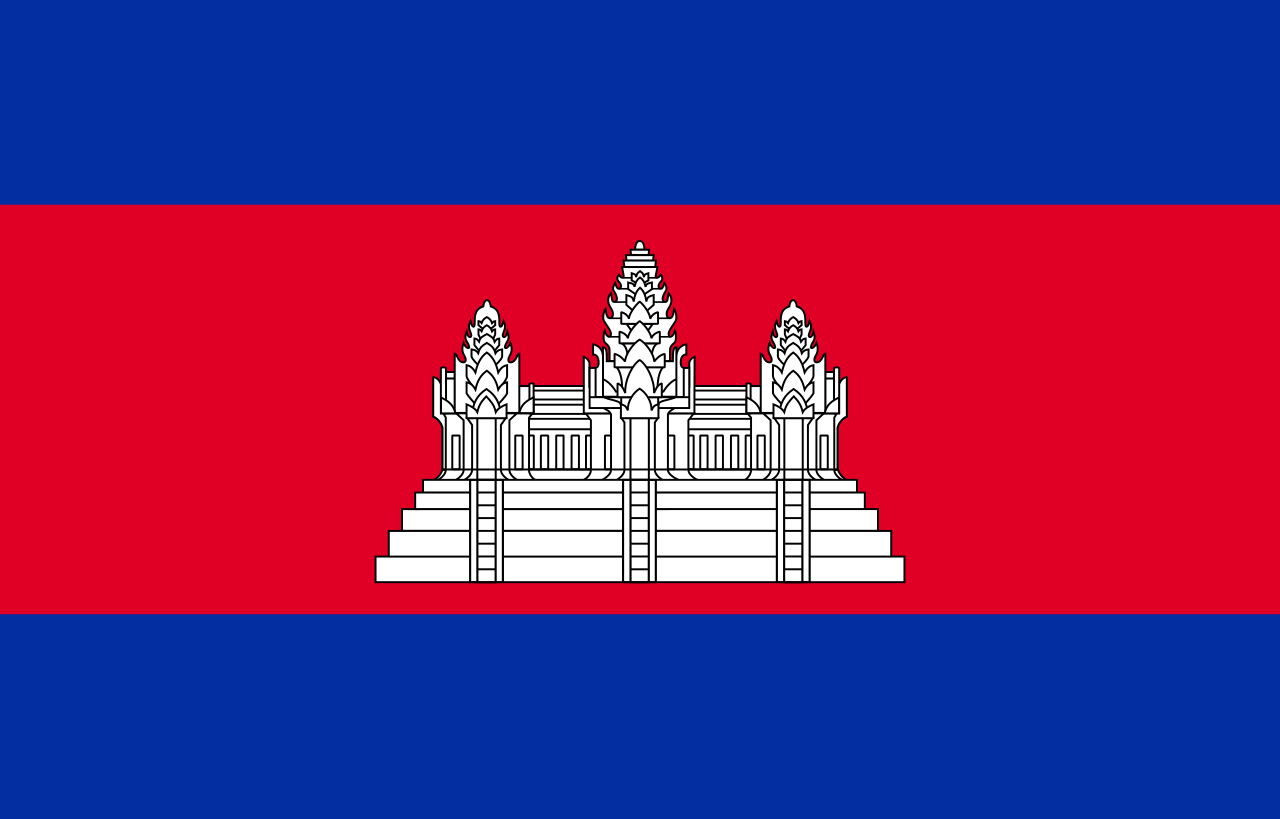 One thought on “Bon Om Touk: The Cambodian Water Festival”