In Thailand, there are a number of orders, decorations and medals to military personnel, dignitaries and civilians. Royal Orders are those presented by His Majesty the King, most of which have several classes or grades of distinction. In addition, there are medals awarded for acts of bravery, services to the Kingdom, services to the monarch, various commemorative occasions and several classes of the Thai Red Cross Society merit medal.

The Royal Orders, in order of precedence, are:

Most of these were portrayed on an occasional series of stamps first issued in 1979. The second set of this type was released on December 5, 1988, as part of that year’s “Longest Reign Celebration” commemorating the accession to the throne of His Majesty the late King Bhumubol Adulyadej, Rama IX, in 1946. This consisted of four pairs of stamps with each pair illustrating different insignia of one Royal Order on a floral background (Scott #1278-1285). These were printed by Société Nouvelle Cantor Sari in France in a quantity of 6,000,000 for the 2-baht stamps and 2,000,000 each for those denominated 3, 5, and 7 baht. They were perforated 13½. The Scott catalogue assigns minor numbers with the letter “a” to each attached continuous-design pair. 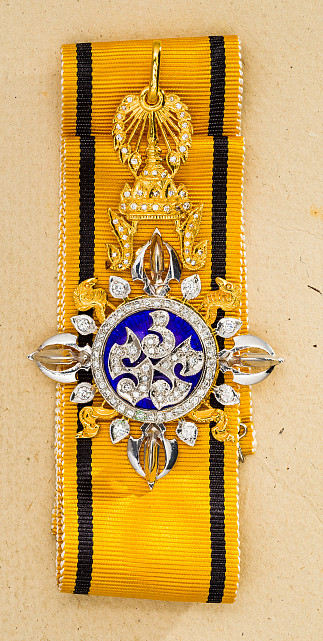 Scott #1285a portrays the Ratana Varabhorn Order of Merit (เครื่องราชอิสริยาภรณ์ตรารัตนว — Rattanawaraphon) which was established on August 1 1911 by King Vajiravudh (Rama VI) to reward personal service to the sovereign. Members were entitled to use the postnominals ร.ว. This is now a retired order with the last induction occurring on April 14, 1942. There were 77 inductees with the first male inducted on August 1, 1911, and the first female on November 10, 1922.

The decoration consists of a single class (Knight). The insignia for this class is a pendant on the order chain or on a neck ribbon.

The Order chain consists of the royal monogram (ร.ร.๖ means King Rama VI) in white enamel, which are interrupted with gold Thai royal crowns, and with the royal emblems in blue enamel. The central locket of chain is the royal emblem made from diamonds. 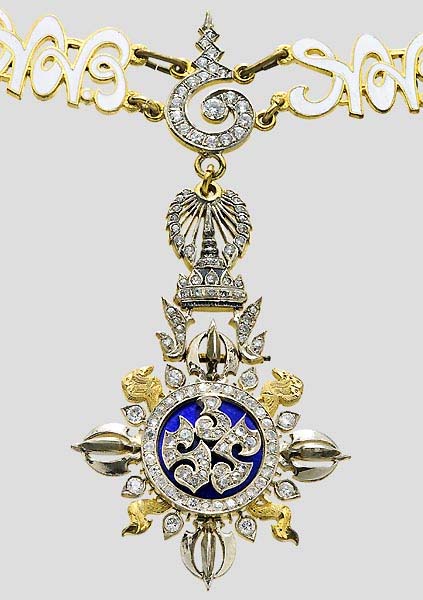 The pendant has a dark-blue enamel field, surrounded by a ring of diamonds. The ring is surrounded by four small sceptres with elephant tusks, eight diamond leaves and four gold ciphers. The pendant is crowned with the royal crown, with a beam of sunlight at the tip.

The ribbon is yellow with black stripes at either end.