I really do love learning. My job as a teacher and my hobby of stamp collecting really do offer me constant opportunities to learn something new and putting together this blog allows me to make new discoveries each and every day. With the “random stamp day” articles, I never know where I will be led. Today’s entry comes about as a result of searching for a postcard to write about; I have participated in Postcrossing and other postcard swapping groups for quite some time and blog about these from time to time on Postcards To Phuket (although not quite as often as I’d like as ASAD always takes precedence during my limited free time).

While I’d previously written about the card this stamp is affixed to, I was intrigued enough by the design to do a bit of research about it. When it comes to art, I much prefer what I term the more classicist masters and something like the image on this stamp puts me in mind of the type of artwork many of my students produce for their Thai teachers. The actual art portrayed on the stamp is on a kind of tapestry called a “gobelin” (which I initially misread as “goblin”, something entirely different). It is the style of tapestry that the 2014 Belarussian set in its multi-year “decorative arts” series commemorated.

Gobelin is defined by my dictionary as “a rich, textured type of hand-stitched tapestry, fit to decorate a wall” deriving from the name of Parisian manufacturer Jehan Gobelin who died in 1476. Gobelin came from of a family of dyers, who in all probability came originally from Reims, and who in the middle of the 15th century established themselves in the Faubourg Saint Marcel, Paris, on the banks of the Bièvre. Jehan was the first head of the firm. He discovered a peculiar kind of scarlet dyestuff, and he expended so much money on his establishment that it was named by the common people la folie Gobelin. To the dye-works there was added in the 16th century a manufactory of tapestry.

The family’s wealth increased so rapidly that in the third or fourth generation some of them forsook their trade and purchased titles of nobility. More than one of their number held offices of state, among others Balthasar, who became successively treasurer general of artillery, treasurer extraordinary of war, councilor secretary of the king, chancellor of the exchequer, councilor of state and president of the chamber of accounts, and who in 1601 received from Henry IV the lands and lordship of Brie-Comte-Robert. He died in 1603. The name of the Gobelins as dyers cannot be found later than the end of the 17th century.

In 1662, the works in the Faubourg Saint Marcel, with the adjoining grounds, were purchased by Jean-Baptiste Colbert on behalf of Louis XIV and transformed into a general upholstery manufactory, the Gobelins Manufactory (Manufacture des Gobelins). The historic tapestry factory is located at 42 avenue des Gobelins, near Les Gobelins métro station in the 13th arrondissement of Paris. It is best known as a royal factory supplying the court of the French monarchs since Louis XIV, and it is now run by the Administration générale du Mobilier national et des Manufactures nationales de tapis et tapisseries of the French Ministry of Culture. The factory is open for guided tours several afternoons per week by appointment, as well as for casual visits every day except Mondays and some specific holidays. The Galerie des Gobelins is dedicated to temporary exhibitions of tapestries from the French manufactures and furniture from the Mobilier National, built in the gardens by Auguste Perret in 1937.

In 1602, Henry IV of France rented factory space from the Gobelins for his Flemish tapestry makers, Marc de Comans and François de la Planche, on the current location of the Gobelins Manufactory adjoining the Bièvre river. In 1629, their sons Charles de Comans and Raphaël de la Planche took over their fathers’ tapestry workshops, and in 1633, Charles was the head of the Gobelins manufactory. Their partnership ended around 1650, and the workshops were split into two. Tapestries from this early, Flemish period are sometimes called pre-gobelins.

In 1662, the works in the Faubourg Saint Marcel, with the adjoining grounds, were purchased by Jean-Baptiste Colbert on behalf of Louis XIV and made into a general upholstery factory, in which designs both in tapestry and in all kinds of furniture were executed under the superintendence of the royal painter, Charles Le Brun, who served as director and chief designer from 1663-1690. On account of Louis XIV’s financial problems, the establishment was closed in 1694, but reopened in 1697 for the manufacture of tapestry, chiefly for royal use. It rivalled the Beauvais tapestry works until the French Revolution, when work at the factory was suspended.

The factory was revived during the Bourbon Restoration and, in 1826, the manufacture of carpets was added to that of tapestry. In 1871, the building was partly burned down during the Paris Commune.

The factory is still in operation today as a state-run institution, consisting of a set of four irregular buildings dating to the seventeenth century plus the building on the avenue des Gobelins built by Jean-Camille Formigé in 1912 after the 1871 fire. They contain Le Brun’s residence and workshops that served as foundries for most of the bronze statues in the park of Versailles, as well as looms on which tapestries are woven following seventeenth century techniques.  The Gobelins still produces a limited amount of tapestries for the decoration of French governmental institutions, with contemporary subjects.

Interestingly enough, Gobelins also appears as the name of a French animation school. Gobelins L’École de L’Image is a school of visual communication and arts in Paris, with its main location near the Latin Quarter. A consular school funded by the Parisian Chamber of Commerce and Industry, it provides several programs at a range of fees. It is best known for the Cinéma Department of Animation, founded in 1975 by Pierre Ayma, who brought the school into the spotlight.

It has an international reputation, producing numerous talented individuals and teams hired by the world’s leading animation studios, including Disney, Universal, Hanna Barbera, Pixar, DreamWorks and Warner Bros. Its former students include many strip cartoonists and animation artists such as French comic book creator Jean-François Miniac, Kristof Serrand (supervising animator at DreamWorks Animation), and Pierre Coffin (best known as the director of movies in the director of Despicable Me franchise). The faculty includes world-class industry leaders such as designer and poster artist Michel Bouvet.

Scott #886 is listed by Belposhta (Белпошта) as their issue #999, released on January 4, 2014, by the Republic of Belarus Ministry of Communication and Information — the higher-valued of two stamps in that year’s continuing “Decorative Applied Art” series. The lower-valued stamp, non-denominated “A” (equal to the tariff of a letter up to 20 gram within Belarus) featured  “Hoarfrost”, a hand-weaving in wool created in 1988 by Galina Stasevich (Scott #885). The non-denominated “M” stamp is equal to the air-mail tariff of a postcard abroad and portrays the 1997 half-wool hand-weaving called “Horses” by Larisa Gustova (born 1947).

According to Belposhta’s December 20, 2013, newsletter which announced the issue, a gobelin is “a carpet-painting that is hand woven according to a picturesque drawing sample on cardboard. It is also a type of artistic textile.” In Belarus, gobelin weaving appeared in the 18th century under the influence of Western Europe. The stamps were designed by Tatyana Kuznetsova, as were the cachet and special postmark used on first day covers. They were printed at the Republican Unitary Enterprise Belarusian Printing House Publishing Company using offset lithography in sheets of eight on chalk-surfaced gummed paper, comb-perforated 14 x 14¾.  There were 80,000 stamps (10,000 full sheets) printed of each denomination.

Both works portrayed on the stamps are in the decorative applied arts collection of the National Art Museum of the Republic of Belarus (Нацыянальны мастацкі музей Рэспублікі Беларусь) in Minsk with which Belposhta collaborated for the release of these stamps. This is the largest museum in the country, containing more than twenty seven thousand works of art divided into twenty miscellaneous collections and comprising two main representative collections — national art and non-Belarusian art.

On January, 24 1939, a resolution of the Council of People’s Commissars of Belarus created the State Art Gallery in Minsk. By the beginning of 1941, the State Art Gallery’s collections numbered nearly 2711 art works out of which four hundred were on exhibition. A long-term work on the description and study of each monument as well as on the creation of the museum collection’s catalogue remained to be completed. Unfortunately, during the first days of the Great Patriotic War the entire collection disappeared without a trace.

After the war, a small part of the works of art was returned which had been at exhibitions in Russia before the start of the war. Although Minsk lay in ruins, the Government of Belarus allocated considerable sums of money for purchasing works of art for the Gallery. In August 1945, canvases by Boris Kustodiev, Vasily Polenov, Karl Briullov and Isaak Levitan were obtained. The construction of a new building for the State Art Gallery was finished in 1957 with the ten spacious halls, occupying two floors and a large gallery. The Museum has been called the National Art Museum of the Republic of Belarus since 1993.

The collections of decorative-applied art of Belarus at the museum consists of two sections: industrial and traditional art. At present, collections of the industrial decorative-applied art include nearly 900 works of the 20th century, different in material and techniques. The most significant section a collection of the decorative glass, including vases, plates, and dishes. From the 1960s, with the beginning of the rebirth of smooth carpet weaving, a collection of Belarusian espalier was formed in the museum. According to the museum’s website, “This type of an applied creative activity in some mass-media is wrongly named as tapestry.” The collection of espaliers is small,   containing only 50 works dating between the 1960s and 1990s. The work of Larisa Gustova, as portrayed on Scott #886, is noted as a stylistic variety for its “wealth and expressiveness of the figurative decision.” 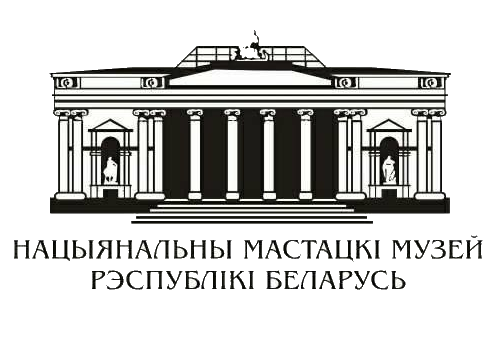