The first event called “United Nations Day” was a World War II Allies’ day of solidarity and military parades launched by U.S. President Franklin D. Roosevelt tied to Flag Day on June 14, 1942, six months after the Declaration by United Nations. It was observed in New York City as the “New York at War” parade, in London, and by the Soviet and Chinese governments. It was observed throughout World War II, during 1942-1944, and predating the foundation of the UN itself, is not directly connected to the current international observance.

United Nations Day has traditionally been marked throughout the world with meetings, discussions and exhibits about the achievements and goals of the organization. Several international schools throughout the world celebrate the diversity of their student body on United Nations Day  Celebrations often include a show of cultural performances in the evening and a food fair, where food is available from all over the world.

In the United States, the President has issued a proclamation each year for United Nations Day since 1948. Former President Barack Obama’s 2016 proclamation can be read in full here, and current President Donald J. Trump’s 2017 proclamation is here.

In Kosovo, United Nations Day is an official non-working day as the province is administered by the Interim Administration Mission.  In the Philippines, local schoolchildren customarily dress in the national costumes of member states and hold a program on U.N. Day, which is the last school day before the semester break. Individual students, classes, or grade levels are assigned a country to represent and study; students handcraft their assigned country’s flag, and prepare cultural presentations and food as part of the day’s educational activities.

The UN’s World Development Information Day has also been held on October 24 every year since 1972.   The General Assembly had the object of drawing the attention of world public-opinion each year to development problems and the necessity of strengthening international co-operation to solve them. The day was further recognized as the date on which the International Development Strategy for the Second Nations Development Decade was adopted in 1970. In recent years, many events have interpreted the title of the day slightly differently. These have concentrated on the role that modern information-technologies, such as the Internet and mobile telephones free from digital divide can play in alerting people and finding solutions to problems of trade and development. One of the specific aims of World Development Information Day was to inform and motivate young people and this change may help to further this aim.

Each year, a special UN Day concert is held in the General Assembly Hall of the United Nations Headquarters in New York City. The 2018 convert will be sponsored by the Permanent Mission of India to the United Nations with the theme of “Traditions of Peace and Non-Violence.” It will feature sarod virtuoso Ustad Amjad Ali Khan, who will be accompanied by his sons Amaan Ali Bangash and Ayaan Ali Bangash, and the Refugee Orchestra Project conducted by Lidiya Yankovskaya.

The idea of the United Nations issuing its own stamps was first proposed by Argentina in 1947. An agreement with the United States postal authorities was reached in 1951 and it stipulated that the stamps be denominated in United States currency, and used only at UN Headquarters. The first United Nations stamps were issued in U.S. dollar denominations on October 24, 1951. The stamps were an immediate success and sold out within days.

When I began collecting stamps in the early 1970s, I initially did so using my mother’s hand-me-down Scott Modern album which predated the formation of the United Nations. Caught up in Bicentennial fever, I soon switched to collecting United States stamps and, not long after that, the stamps of the United Nations caught my eye. My second stamp album purchase (probably when I was in my early teens) was an H.E. Harris album covering United Nations New York. I cannot recall it there were spaces for Geneva issues and Vienna was just beginning to release their own stamps. So, my affinity for U.N. stamps goes back nearly 40 years now. However, it has only been within the past three or four months that I began collecting them once again with the purchase of a few mixed lots. While the majority of these stamps are from the New York offices, there were quite a few from Vienna as well many of which were cancelled-to-order (CTO).

Normally, I don’t care for CTO stamps, but I liked the design of the two stamps the Vienna office released to commemorate United Nations Day in 1987, particularly the 6-schilling denomination. I have two copies of Scott #75, both CTO with first day of issue postmarks, one obscuring the upper left of the stamp and the other on the lower right. With apologies, I made a composite of the two to show the design, illustrated below as well as the blog’s landing page. I couldn’t find a lot of information about the stamp online other than it was printed using offset lithography in a quantity of 1,540,523 and is perforated 14½ x 14¾. I tried to find out the designer and printer but the archives on the United Nations Postal Administration website only goes back to 1990 and I couldn’t find another online source for the information.

A previous article on A Stamp A Day covered United Nations Day with a stamp from Thailand, which has a strong UN presence with an office in Bangkok. 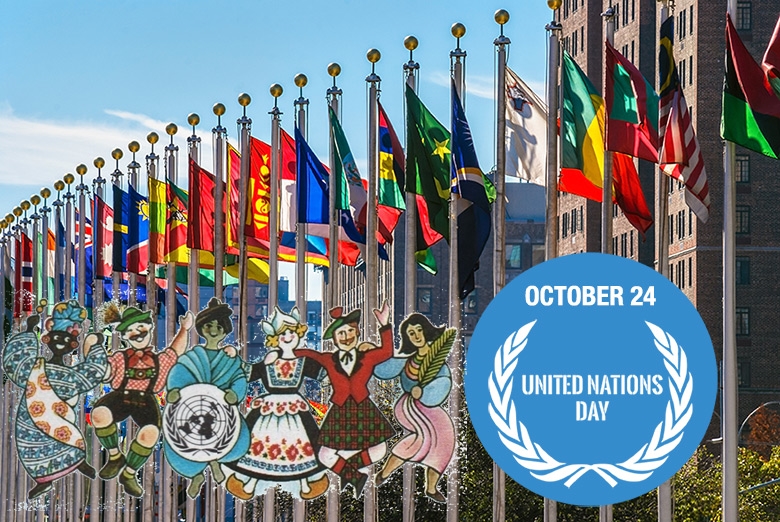