Victoria, a state of Australia and former British colony, was still under the control of New South Wales when its first post office was opened, at Melbourne in April 1837. Offices at Geelong and Portland opened soon after, and by 1850 there were fifty post offices. Currently, the southeastern Australian state of Victoria is that country’s most densely populated state and its second-most populous state overall. Most of its population lives concentrated in the area surrounding Port Phillip Bay, which includes the metropolitan area of its state capital and largest city, Melbourne, Australia’s second-largest city. Geographically the smallest state on the Australian mainland, Victoria is bordered by Bass Strait and Tasmania to the south, New South Wales is to the north, the Tasman Sea is to the east, and South Australia is to the west.

Victoria’s northern border follows a straight line from Cape Howe to the start of the Murray River and then follows the Murray River as the remainder of the northern border. On the Murray River, the border is the southern bank of the river. This precise definition was not established until 1980, when a ruling by Justice Ninian Stephen of the High Court of Australia settled the question as to which state had jurisdiction in the unlawful death of a man on an island in the middle of the river. The ruling clarified that no part of the watercourse is in Victoria. The border also rests at the southern end of the Great Dividing Range, which stretches along the east coast and terminates west of Ballarat. It is bordered by South Australia to the west and shares Australia’s shortest land border with Tasmania. The official border between Victoria and Tasmania is at 39°12′ S, which passes through Boundary Islet in the Bass Strait for 85 meters.

Victoria, like Queensland, was named after Queen Victoria, who had been on the British throne for 14 years when the colony was established in 1851. 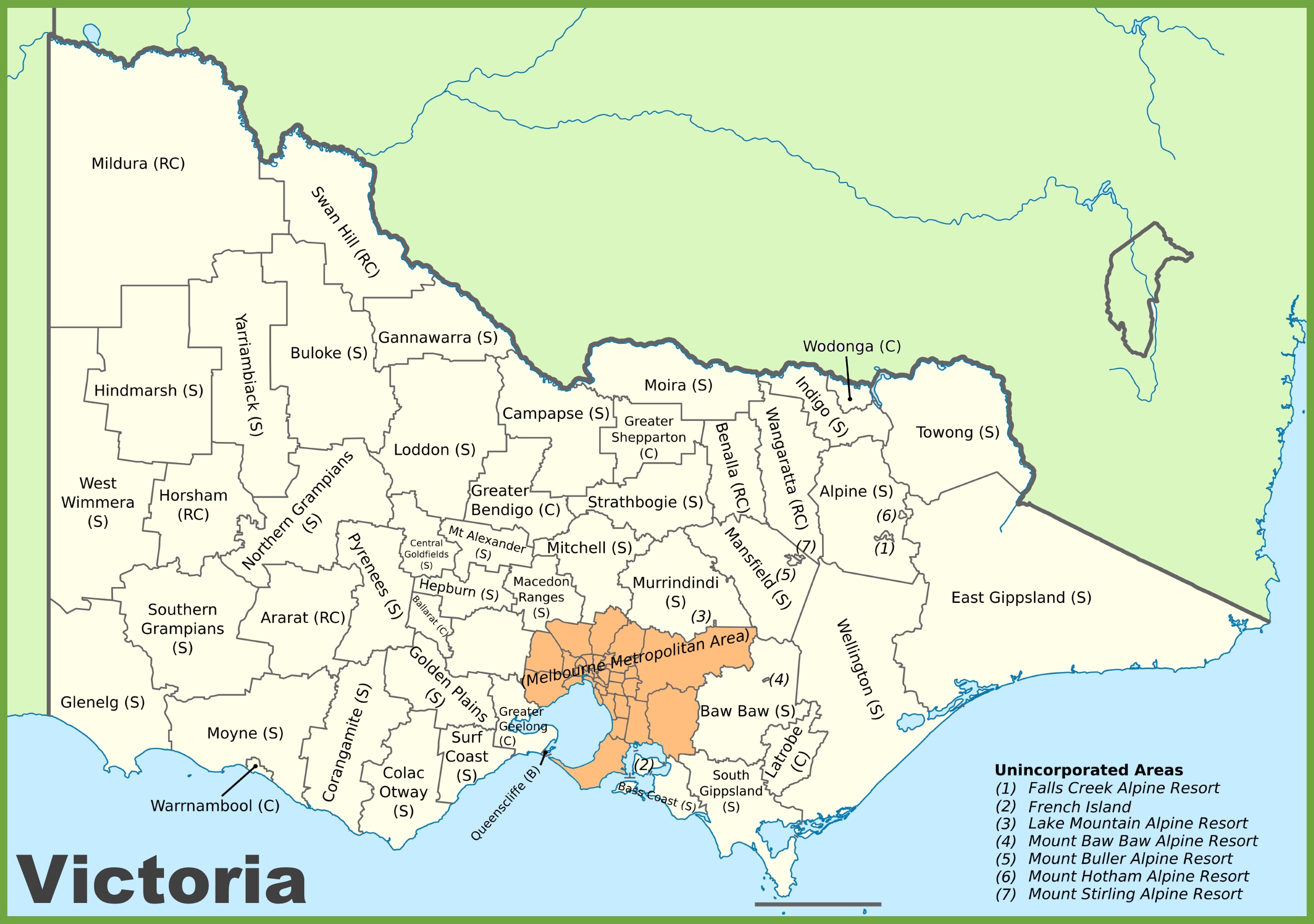 After the founding of the colony of New South Wales in 1788, Australia was divided into an eastern half named New South Wales and a western half named New Holland, under the administration of the colonial government in Sydney. The first British settlement in the area later known as Victoria was established in October 1803 under Lieutenant-Governor David Collins at Sullivan Bay on Port Phillip. It consisted of 402 people (five government officials, nine officers of marines, two drummers, and 39 privates, five soldiers’ wives and a child, 307 convicts, 17 convicts’ wives, and seven children). They had been sent from England in HMS Calcutta under the command of Captain Daniel Woodriff, principally out of fear that the French, who had been exploring the area, might establish their own settlement and thereby challenge British rights to the continent.

In 1826, Colonel Stewart, Captain S. Wright, and Lieutenant Burchell were sent in HMS Fly(Captain Wetherall) and the brigs Dragon and Amity, took a number of convicts and a small force composed of detachments of the 3rd and 93rd regiments. The expedition landed at Settlement Point (now Corinella), on the eastern side of Western Port Bay, which was the headquarters until the abandonment of Western Port at the insistence of Governor Darling about 12 months afterwards.

Victoria’s next settlement was at Portland, on the south west coast of what is now Victoria. Edward Henty settled Portland Bay in 1834.

Melbourne was founded in 1835 by John Batman, who set up a base in Indented Head, and John Pascoe Fawkner. From settlement, the region around Melbourne was known as the Port Phillip District, a separately administered part of New South Wales. Shortly after, the site now known as Geelong was surveyed by Assistant Surveyor W. H. Smythe, three weeks after Melbourne. And in 1838, Geelong was officially declared a town, despite earlier white settlements dating back to 1826.

On July 1, 1851, writs were issued for the election of the first Victorian Legislative Council, and the absolute independence of Victoria from New South Wales was established proclaiming a new Colony of Victoria. Days later, still in 1851 gold was discovered near Ballarat, and subsequently at Bendigo. Later discoveries occurred at many sites across Victoria. This triggered one of the largest gold rushes the world has ever seen. The colony grew rapidly in both population and economic power. In 10 years, the population of Victoria increased sevenfold from 76,000 to 540,000. All sorts of gold records were produced, including the “richest shallow alluvial goldfield in the world” and the largest gold nugget. Victoria produced in the decade 1851–1860 20 million ounces of gold, one-third of the world’s output

Immigrants arrived from all over the world to search for gold, especially from Ireland and China. Many Chinese miners worked in Victoria, and their legacy is particularly strong in Bendigo and its environs. Although some racism was directed at them, the level of anti-Chinese violence was not as great as was seen at the Lambing Flat riots in New South Wales. However, a riot at Buckland Valley near Bright occurred in 1857. Conditions on the gold fields were cramped and unsanitary; an outbreak of typhoid at Buckland Valley in 1854 killed over 1,000 miners.

In 1854, at Ballarat, an armed rebellion against the government of Victoria was made by miners protesting against mining taxes (the “Eureka Stockade”). This was crushed by British troops, but the discontents prompted colonial authorities to reform the administration (particularly reducing the hated mining licence fees) and extend the franchise. Within a short time, the Imperial Parliament granted Victoria responsible government with the passage of the Colony of Victoria Act 1855. Some of the leaders of the Eureka rebellion went on to become members of the Victorian Parliament.

The first foreign military action by the colony of Victoria was to send troops and a warship to New Zealand as part of the Māori Wars. Troops from New South Wales had previously participated in the Crimean War.

In 1901, Victoria became a state in the Commonwealth of Australia. As a result of the gold rush, Melbourne had by then become the financial centre of Australia and New Zealand. Between 1901 and 1927, Melbourne was the capital of Australia while Canberra was under construction. It was also the largest city in Australia at the time.

Victoria’s first postage stamps appeared on 9 January 1895. Engraved and litho locally by Thomas Ham of Melbourne, they featured a half-length portrait of Queen Victoria seated, holding orb and sceptre. There were three values: 1 penny in orange-vermilion, 2 pence in lilac-mauve, and 3 pence in blue. The dies were altered several times during printing, yielding dozens of minor variations.

As Victoria continued to be considered part of New South Wales, the new stamps were apparently accepted along the existing NSW stamps.

Damage to the 2-penny die prompted Ham to produce a new design, this time showing a full-length portrait of the queen seated on the Coronation Chair (although the design is traditionally described as “queen on throne”). As with the first design, many varieties and shades are known.

With the exception of a Perkins Bacon version of “queen on throne” in 1856, subsequent designs reverted to the profile bust typical of British stamps of the time. Multiple designs, colors, papers, perforations, and watermarks resulted in a large number of different stamps; Stanley Gibbons identifies nearly 200 types issued between 1854 and 1883 alone.

The Postage Act of 1883 made postage, duty, and fee stamps interchangeable, and as a result, the government decided to issue only one type of stamp subsequently. More types of duty stamp dies were available than any other, so from that point new issues were all inscribed STAMP DUTY.. As they continued to be used as revenue stamps, high values were printed, up to 100 pounds. The stamp duty inscription was dropped in 1896.

Victoria issued semi-postal stamps in 1897 and 1901, in the first instance the extra income went to a hospital fund, and in the second, to a Boer War Patriotic Fund.

Like the other colonies, after federation Victoria continued to issue its own stamps. In 1901, King Edward VII made an appearance on 1-pound and 2-pound stamps, his only stamp depictions by Victoria before its issues were superseded by those of the Commonwealth in 1913.