While searching for a “random stamp” to write about last night, I realized that I hadn’t yet put together a stamp issuer profile on French Polynesia despite having obtained several releases back in February 2017. They were “hidden” in the French Oceania folder and I’d forgotten about them! Today’s article will remedy that by bringing the story I’d started more than a year ago up to date; for the earlier general and postal history, please see the previous ASAD French Oceania article.

French Polynesia (Polynésie française in French and Pōrīnetia Farāni in Tahitian) is an overseas collectivity of the French Republic (collectivité d’outre-mer de la République française — COM — sometimes unofficially referred to as an overseas country, pays d’outre-mer — POM). It is composed of 118 geographically dispersed islands and atolls stretching over an expanse of more than 1,200 miles (2,000 kilometers) in the South Pacific Ocean. Its total land area is 1,600 square miles (4,167 km²).

French Polynesia is divided into five groups of islands: the Society Islands archipelago, composed of the Windward Islands and the Leeward Islands; the Tuamotu Archipelago; the Gambier Islands; the Marquesas Islands; and the Austral Islands. Among its 118 islands and atolls, 67 are inhabited. Tahiti, which is located within the Society Islands, is the most populous island and the seat of the capital of the collectivity, Papeete. It has close to 69% of the population of the islands in 2017. Although not an integral part of its territory, Clipperton Island was administered from French Polynesia until 2007. 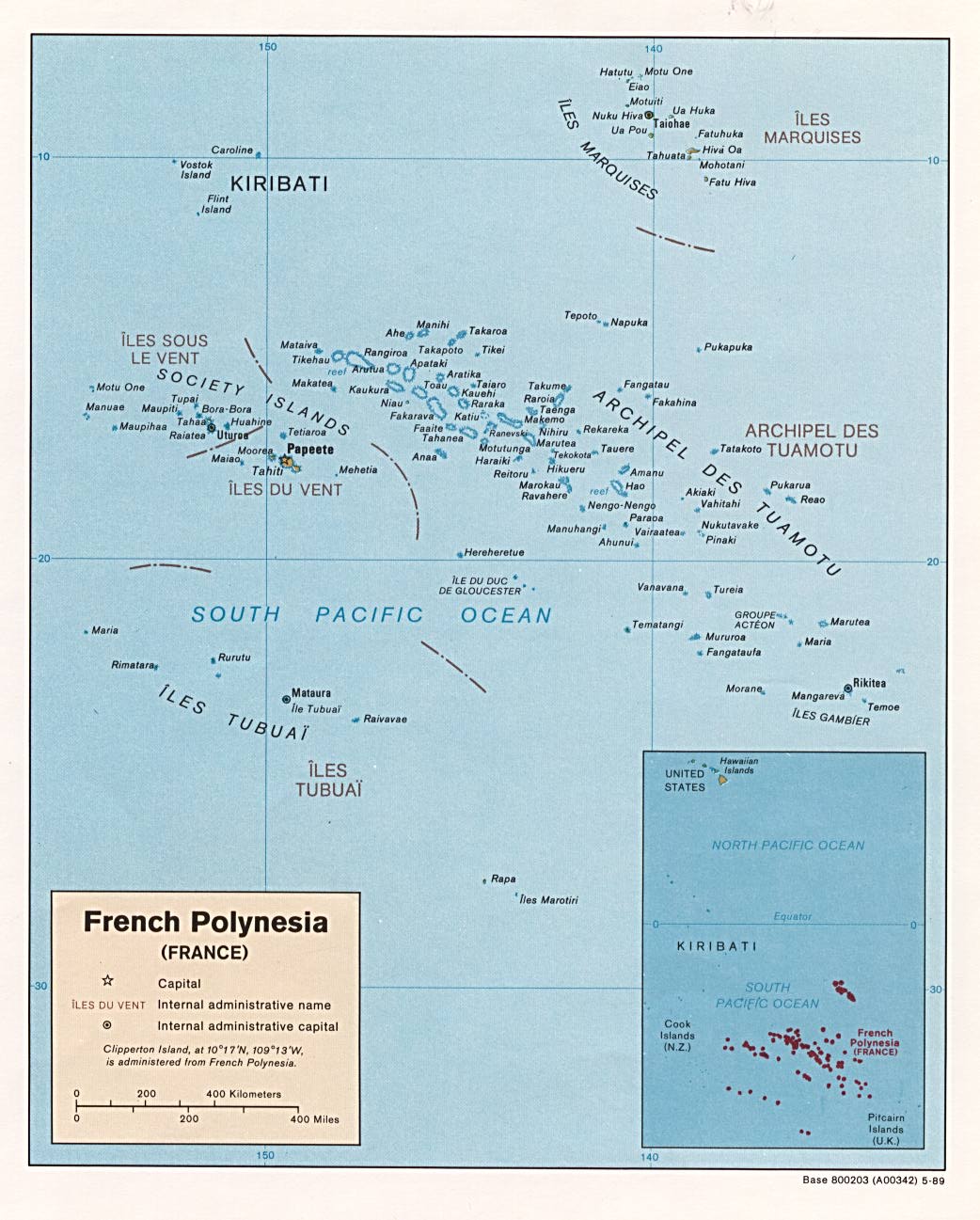 In 1946, Polynesians were granted French citizenship and the islands’ status was changed to an overseas territory; the islands’ name was changed in 1957 to Polynésie Française (French Polynesia). In 1962, France’s early nuclear testing ground of Algeria became independent and the Moruroa atoll in the Tuamotu Archipelago was selected as the new testing site; tests were conducted underground after 1974. In 1977, French Polynesia was granted partial internal autonomy; in 1984, the autonomy was extended. French Polynesia became a full overseas collectivity of France in 2003.

In September 1995, France stirred up widespread protests by resuming nuclear testing at Fangataufa atoll after a three-year moratorium. The last test was on January 27, 1996. On January 29, 1996, France announced that it would accede to the Comprehensive Test Ban Treaty, and no longer test nuclear weapons.

French Polynesia was relisted in the United Nations List of Non-Self Governing Territories in 2013, making it eligible for a UN-backed independence referendum. The relisting was made after its indigenous government was voiced and supported by the Polynesian Leaders Group, Pacific Conference of Churches, Women’s International League for Peace and Freedom, Non-Aligned Movement, World Council of Churches, and Melanesian Spearhead Group.

At the French municipal elections held in March 2008, several prominent mayors who are member of the Flosse-Temaru coalition lost their offices in key municipalities of French Polynesia, which was interpreted as a disapproval of the way Gaston Tong Sang, whose party French Polynesian voters had placed first in the territorial elections the month before, had been prevented from becoming president of French Polynesia by the last minute alliance between Flosse and Temaru’s parties. Eventually, on 15 April 2008 the government of Gaston Flosse was toppled by a constructive vote of no confidence in the territorial assembly when two members of the Flosse-Temaru coalition left the coalition and sided with Tong Sang’s party. Gaston Tong Sang was elected president of French Polynesia as a result of this constructive vote of no confidence, but his majority in the territorial assembly is very narrow. He offered posts in his cabinet to Flosse and Temaru’s parties which they both refused. Gaston Tong Sang has called all parties to help end the instability in local politics, a prerequisite to attract foreign investors needed to develop the local economy.

The legal tender of French Polynesia is the CFP Franc which has a fixed exchange rate with the Euro. The nominal gross domestic product (or GDP) of French Polynesia in 2014 was 5.623 billion US dollars at market local prices, the sixth-largest economy in Oceania after Australia, New Zealand, Hawaii, New Caledonia, and Papua New Guinea. The GDP per capita was $20,098 in 2014 (at market exchange rates, not at PPP), lower than in Hawaii, Australia, New Zealand, and New Caledonia, but higher than all the independent insular states of Oceania. Both per capita and total figures were significantly lower than those recorded before the financial crisis of 2007–08.

French Polynesia has a moderately developed economy, which is dependent on imported goods, tourism, and the financial assistance of mainland France. Tourist facilities are well developed and are available on the major islands. Main agricultural productions are coconuts (copra), vegetables and fruits. French Polynesia exports noni juice, a high quality vanilla, and the famous black Tahitian pearls which accounted for 55% of exports (in value) in 2008.

French Polynesia’s seafloor contains rich deposits of nickel, cobalt, manganese, and copper that are not exploited.

Scott #189 is described as portraying a “girl with shells on a beach”. The 10-franc dark blue, brown and carmine engraved stamp, printed on unwatermarked paper and perforated 13, was one of nine stamps in three designs released on November 3, 1958 — the first to be inscribed POLYNESIE FRANCAISE (Scott #182-189). The designs were slightly updated for a twentieth anniversary release in 1978 with “1958 1978” added for a three-stamp release (Scott #304-306); an accompanying souvenir sheet featured the stamp designs in changed colors (Scott #306a). Quite a few stamps of French Oceania / Polynesia feature Polynesian girls and women.

For centuries, the beauty of Polynesian women has been at the center of travelers’ accounts upon returning from Tahiti and other islands. Many women in other parts of the world tried to uncover the secret to the legendary beauty of the vahine (woman in Tahitian) with their smooth, golden skin and long, shiny hair. The French artist Paul Gauguin helped to perpetuate the allure of the islands’ women with his paintings in the late 19th century. Many natives were painted from life by Gauguin who gave Tahitian titles to his works. In Ea haere ia oe (Where Are You Going?), for example, a pensive young girl wears the white flower tiare behind her left ear, signifying readiness to take a lover. Although the Scott catalogue doesn’t mention it, I believe the woman on Scott #189 to be Tahitian.

Tahiti is the largest island in the Windward group of French Polynesia. It is located in the archipelago of the Society Islands in the central Southern Pacific Ocean, and is divided into two parts: the bigger, northwestern part, Tahiti Nui, and the smaller, southeastern part, Tahiti Iti. The island was formed from volcanic activity and is high and mountainous with surrounding coral reefs. The population is 189,517 inhabitants (2017 census), making it the most populous island of French Polynesia and accounting for 68.7% of its total population.

The first Polynesian settlers arrived in Tahiti around 400 A.D. by way of Samoan navigators and settlers via the Cook Islands. Over the period of half a century there was much inter-island relations with trade, marriages and Polynesian expansion with the Islands of Hawaii and through to Rapanui. The original Tahitian society was unaware of metal as it was based on Stone Age technology. However, it enabled Tahitians to clear land for cultivation on the fertile volcanic soils and build fishing canoes, their two basic subsistence activities. The tools of the Tahitians when first discovered were made of stone, bone, shell or wood.

The Tahitians were divided into three major classes (or castes): ari’i, ra’atira and manahune. Ari’i were relatively few in number while manahune constituted the bulk of population and included some members who played essential roles in the society. It is estimated that by the first contact with Europeans in 1767 the population of Tahiti was no more than 40,000 while other Society Islands held probably 15,000-20,000 natives.

Tahitians divided the day into the periods of daylight (ao) and darkness (pō). There was also a concept of irrational fear called mehameha, translated as uncanny feelings. The healers, familiar with herbal remedies, were called ta’ata rā’au or ta’ata rapa’au. In the 19th century, Tahitians added the European medicine to their practice. The most famous Tahitian healer Tiurai, of ari’i, died aged 83 during the influenza outbreak on Tahiti in 1918.

When British Captain Samuel Wallis “discovered” Tahiti on June 18, 1767, the natives were eager to trade, especially in iron nails unknown to them. Philibert Commerçon in his The Tahitian Savage to the French wrote: “They have a fruit instead of bread. Their other foods are equally simple”. Commerçon also described the practice of public sex, which he said Tahitians engaged in while being cheered on by applause and musical instruments. In marital relationships, Tahitians closely approached the situation where all women were the wives of men and the wife of every man was also the wife of his friend. Louis Antoine de Bougainville described a scene, where a young girl came on board his ship, “placed herself upon the quarter deck and carelessly dropt the cloth.” Charles Darwin also wrote on Tahitians during his voyage on the Beagle: “There is a mildness in the expression of their countenances, which at once banishes the idea of a savage; and an intelligence, which shows they are advancing in civilization”.

The European ships however brought such diseases for which Tahitians had little or no immunity, such as dysentery, smallpox, scarlet fever, typhoid fever and tuberculosis. As a result of these changes, by 1797 the population of Tahiti decreased to 16,000 from an estimated 40,000 in 1767, when the first European ship HMS Dolphin touched on the island. The 1881 census enumerated about 5,960 native Tahitians. The recovery continued in spite of a few more epidemics.

In the late 1960s and early 1970s, Tahitian poets Henri Hiro, Charles Manutahi, Vaitiare and Turo Raapoto spearheaded the anticolonial writing in Tahiti. Hiro’s God of Culture implores Oihanu, the Tahitian god of culture and husbandry, to empower the ‘new generation’. Three women writers — Michou Chaze, Chantal Spitz and Vaitiare — explore the problems of Tahitian identification in contemporary French Polynesia. Tahitian peasants and workers call themselves the ‘true Tahitians’ (Ta’ata Tahiti Mau) to distinguish from part-Europeans (Ta’ata ‘afa Popa’a). At the same time demis quite frequently identify themselves as indigenous people in terms of culture and political affiliation. Such Tahitian activists as Pouvanaa a Oopa, Francis Sanford and Charlie Ching and Catholic bishops Michel-Gaspard Coppenrath and Hubert Coppenrath are of demi ancestry.

Tahitians are French citizens and are represented by two elected deputies to the French National Assembly and one representative in the French Senate. Tahitians vote by universal adult suffrage in all major French elections. 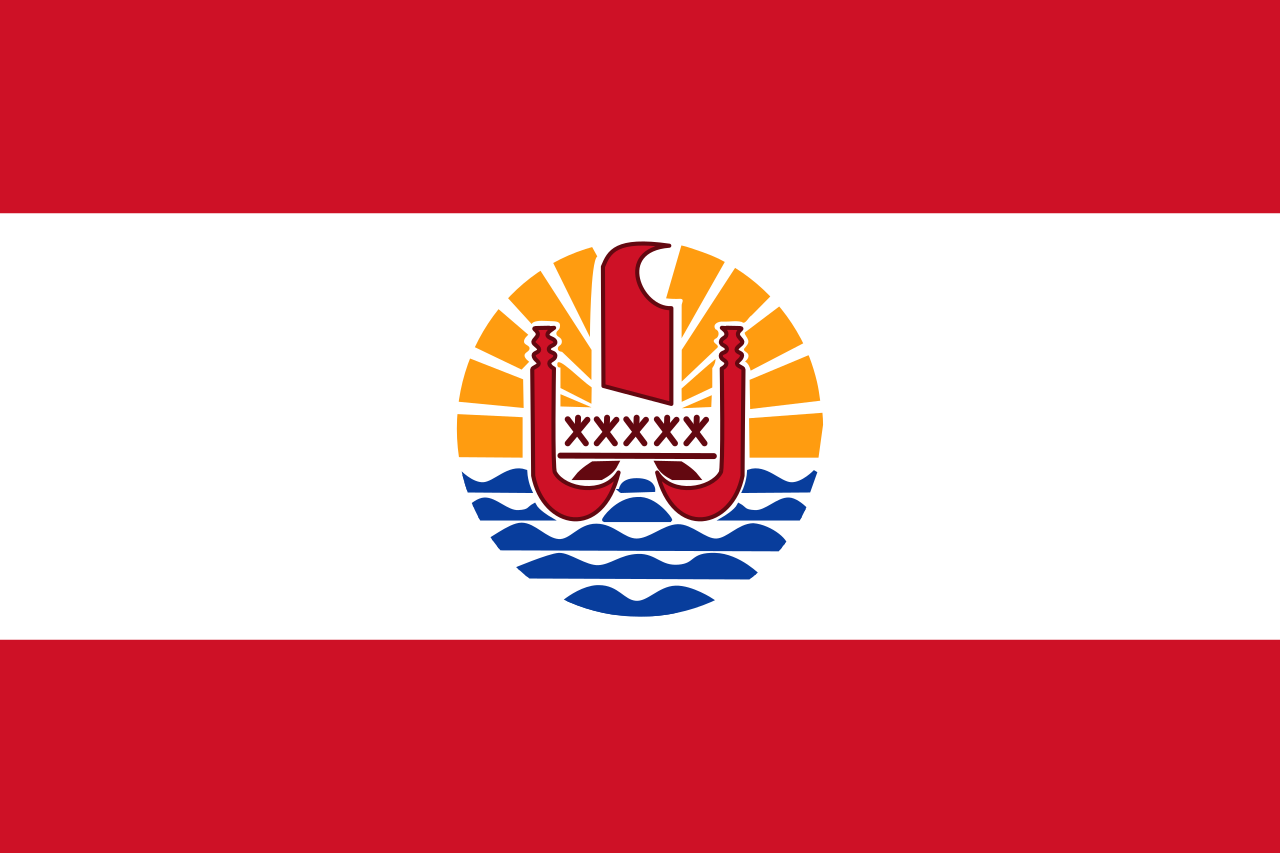 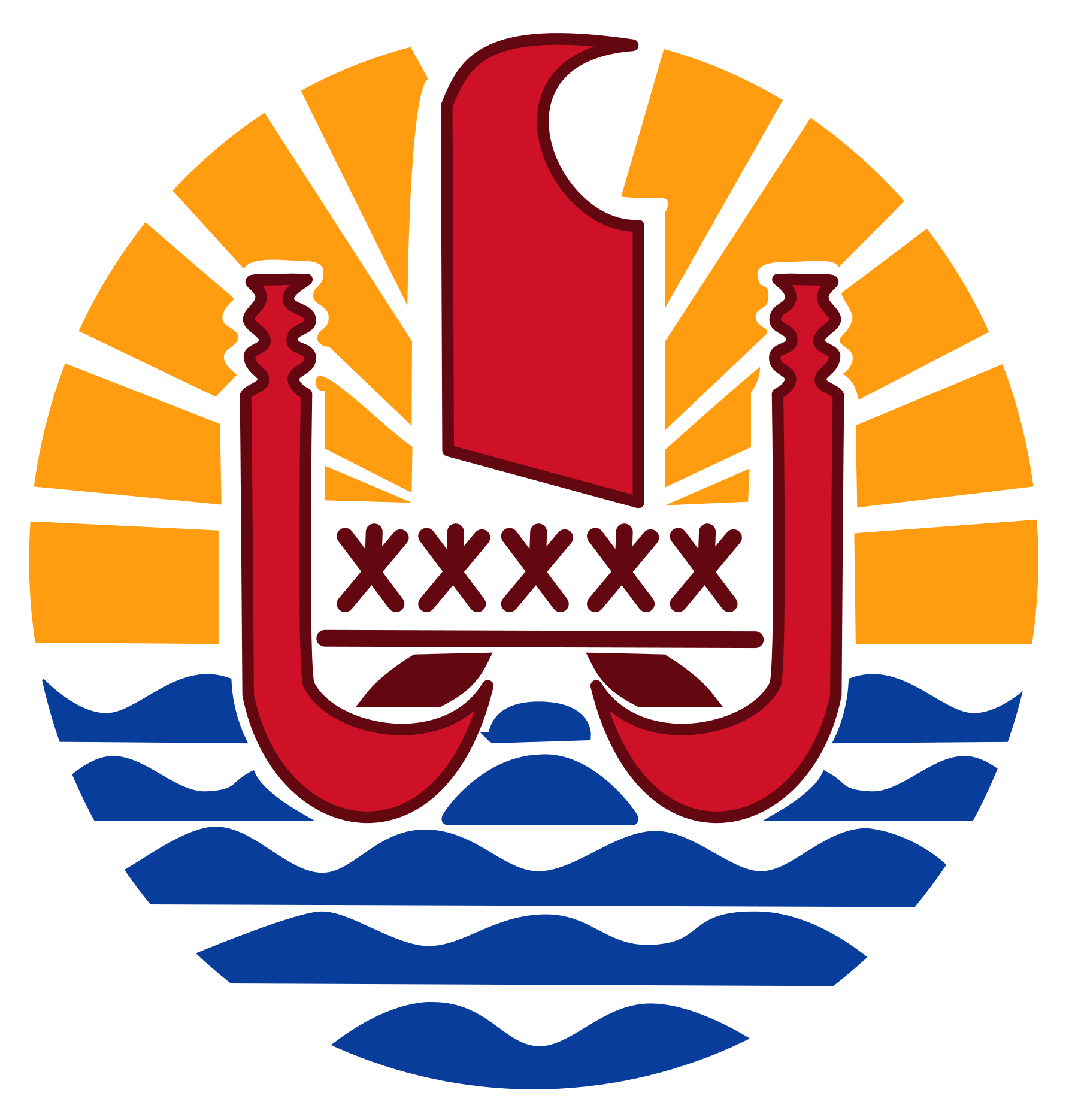