At 10:22 PM local time on Saturday, May 21, 1927, Charles Augustus Lindbergh landed his Ryan single-engine monoplane Spirit of St. Louis on the ground at Aérodrome de Le Bourget in Paris, France, completing the first solo, non-stop flight across the Atlantic Ocean. He had begun his journey 33 hours, 30 minutes and 29.8 seconds before — lifting his aircraft from the muddy runway of Roosevelt Airfield in Garden City, New York, at 7:52 AM local time on Friday, May 20. He was greeted by a crowd of more than 150,000 people who stormed the field, dragged Lindbergh out of the cockpit, and carried him around on their shoulders, shouting “Vive!” His life would never be the same.

I had planned for today’s article to include the aftermath of Lindbergh’s flight from his landing in Paris, subsequent flights to Brussels and London, through his triumphant return to the United States including the “Goodwill Tour’ which lasted from June 1927 until January 1928. Unfortunately, unexpected work demands and other delays have necessitated a severe cutback to the point that only the brief European “tour” is covered today.

“I circle. Yes, it’s definitely an airport. . . It must be Le Bourget. . . I shift fuel valves to the center wing-tank, sweep my flashlight over the instrument board in a final check, fasten my safety belt, and nose the Spirit of St. Louis down into a gradually descending spiral. . .

“I straighten out my wings and let the throttled engine drag me on beyond the leeward border. Now the steep bank into the wind, and the dive toward the ground. But how strange it is, this descent. I’m wide awake, but the feel of my plane has not returned. . . My movements are mechanical, uncoordinated, as though I were coming down at the end of my first solo. . .

As soon as he finished taxiing and shut off the engine of the Spirit of St. Louis, Lindbergh opened the cabin door, was immediately dragged out of the cockpit, lifted down and hoisted onto the shoulders of the police, who carried him through the surging crowd, cries of “Vive” ringing through the night. While he struggled to return to the plane, the fine linen, silver-painted fabric covering on the fuselage was badly torn by souvenir hunters. Also, fairing strips were broken by the surging crowd and one grease reservoir was torn off the engine. Lindbergh was retrieved and he and his plane reached the safety of a nearby hangar with the aid of French military fliers, soldiers, and police. The fuselage was repaired and recovered at Le Bourget during the week that Lindbergh remained in Paris. 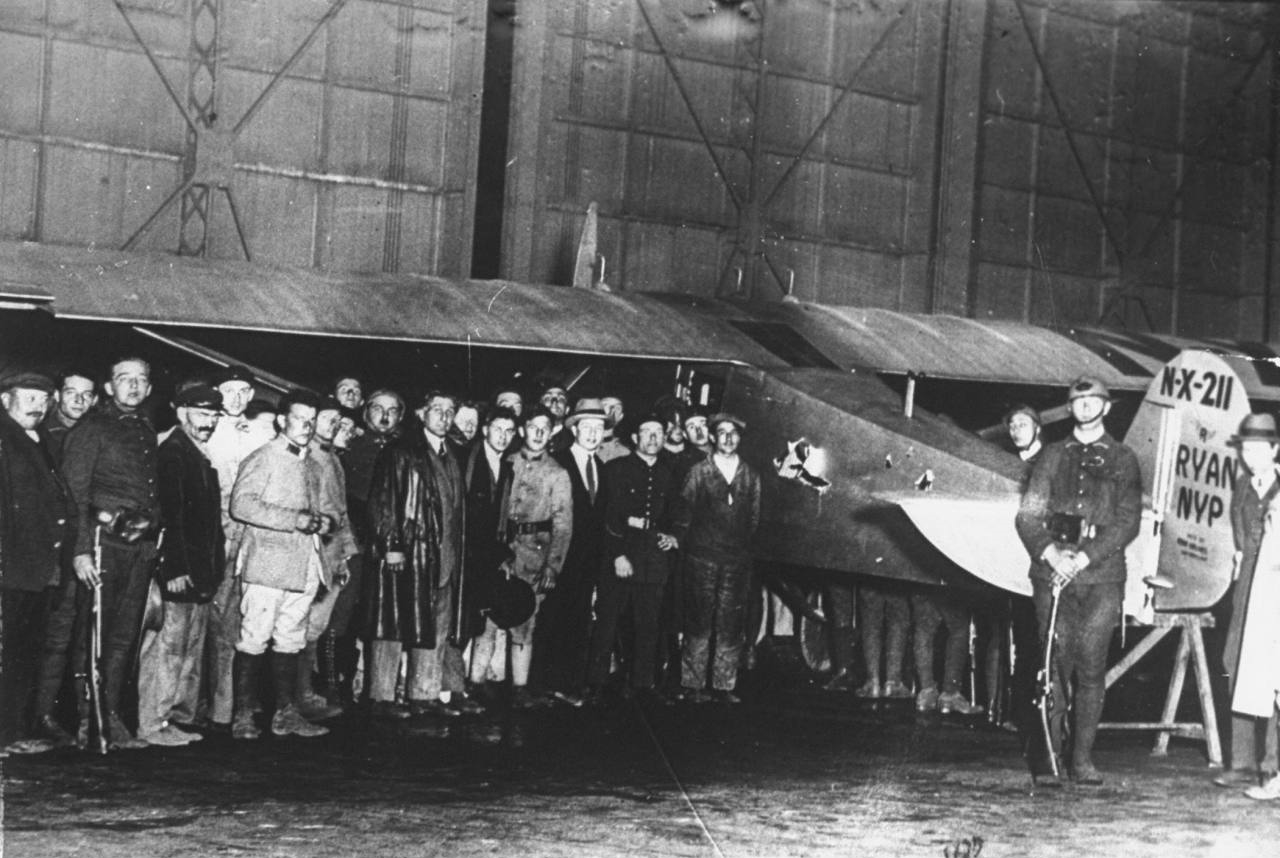 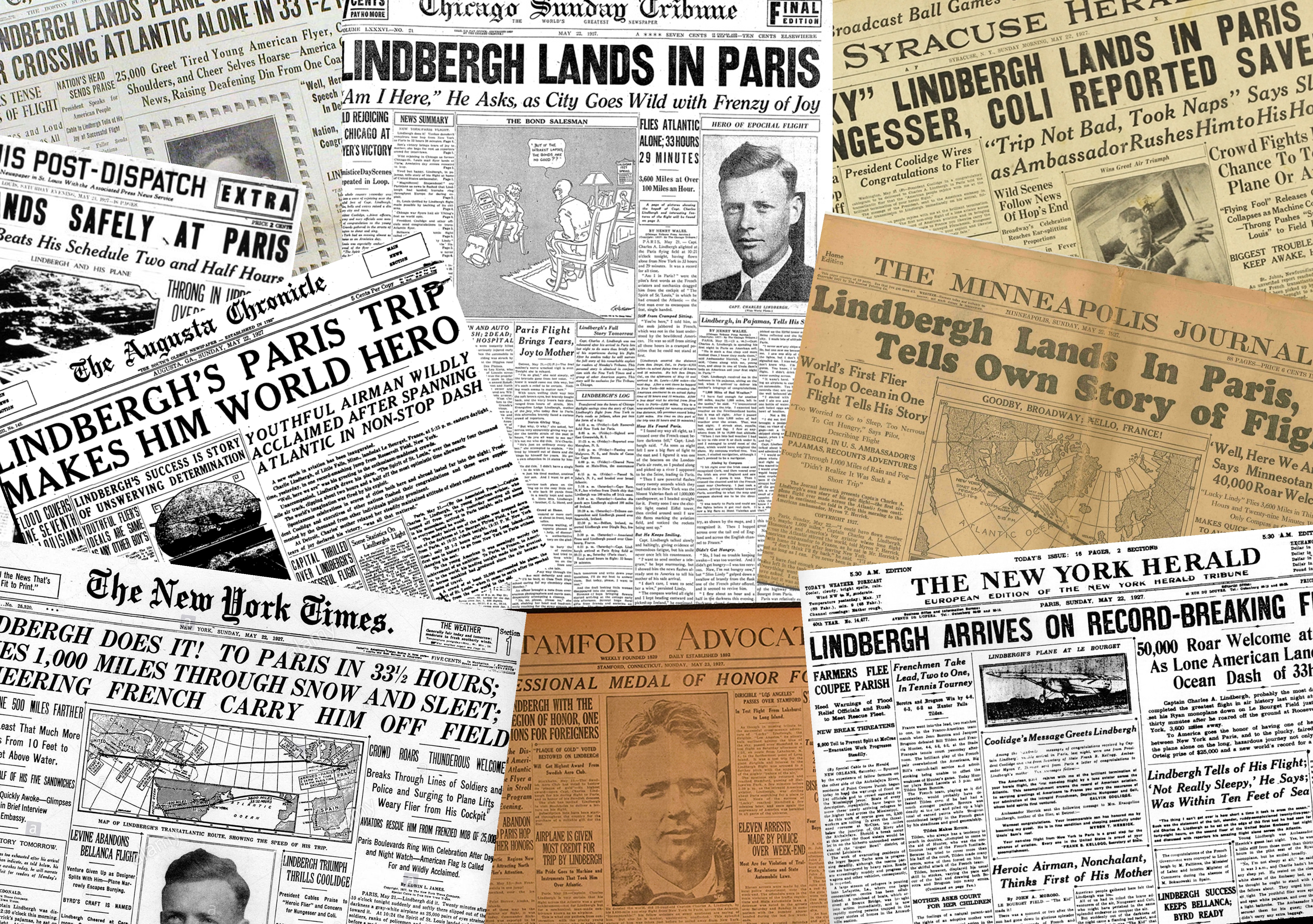 When news of Lindbergh’s feat reached the United States, it was still Saturday evening. His mother’s house in Detroit was surrounded by a crowd estimated at about 1,000. The St. Louis Post-Dispatch published an Extra edition that night announcing his arrival in Paris. Probably every newspaper in the country devoted their front pages to coverage of Charles Lindbergh and the Spirit of St. Louis on Sunday, May 22, 1927. Perhaps feeling that the first solo non-stop flight across the Atlantic was enough of a news story, the Syracuse Herald from upstate New York actually reported that Charles Nungesser and François Coli — the French aviators had disappeared during a Paris to New York attempt at the transatlantic crossing  two weeks before — had been found safe and sound.

Meanwhile, back in Paris, the French Foreign Office raised the American flag that Sunday morning in honor of Charles Lindbergh, the first time it had saluted someone who wasn’t a head of state. Lindbergh, after a bit of sleep (he hadn’t slept for 55 hours prior to his landing at Le Bourget the night before), met with Ambassador Myron T. Herrick at the U.S. Embassy in Paris. He briefly and modestly appeared on the embassy’s balcony, responding to the persistent calls of the huge crowd which had gathered outside. For hours after he retreated back inside, they shouted, clapped, and waved their hats and handkerchiefs.

“I am not a religious man,” Ambassador Herrick said shortly after Lindbergh’s arrival, “but I believe there are certain things that happen in life that can only be described as interpretation of a Divine Act… Lindbergh brought you the spirit of America in a manner in which it could never be brought in a diplomatic sack.” 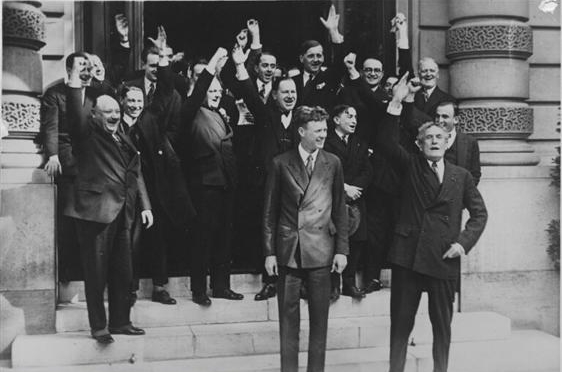 On Monday, May 27, Charles Lindbergh visited the Aéro-Club de France where he was awarded the organization’s Great Medal which it has awarded  to individuals who have made outstanding contributions to the advancement of aviation since 1900. While at the Club, he met British aviator Alan Cobham became famous as a pioneer of long distance aviation as a member of the Royal Flying Corps in World War I. In June-July 1926, he flew from the River Medway in Britain to Melbourne, in a de Havilland DH.50 floatplane. On November 24, 1926, Cobham attempted but failed to be the first person to deliver mail to New York City by air from the east, planning to fly mail from the White Star ocean liner RMS Homeric in a de Havilland DH.60 Moth floatplane when the ship was about 12 hours from New York harbor on a westbound crossing from Southampton. After the Moth was lowered from the ship, however, Cobham was unable to take off owing to rough water and had to be towed into port by the ship. The same year, Cobham was awarded the Gold Medal by the Fédération Aéronautique Internationale.

On Wednesday, May 25, a grand banquet was held in Lindbergh’s honor, sponsored by the Fédération aéronautique internationale.  He met French aviation pioneer Louis Blériot who, on July 25, 1909, made the first flight across the English Channel, Blériot was also the first to make a working, powered, piloted monoplane[4] and was the founder of a successful aircraft manufacturing company. The President of France, Pierre-Paul-Henri-Gaston Doumergue, pinned the National Order of the Legion of Honor (Ordre national de la Légion d’honneur) — France’s highest order of merit for military and civil merits — upon the lapel of Lindbergh’s borrowed suit. 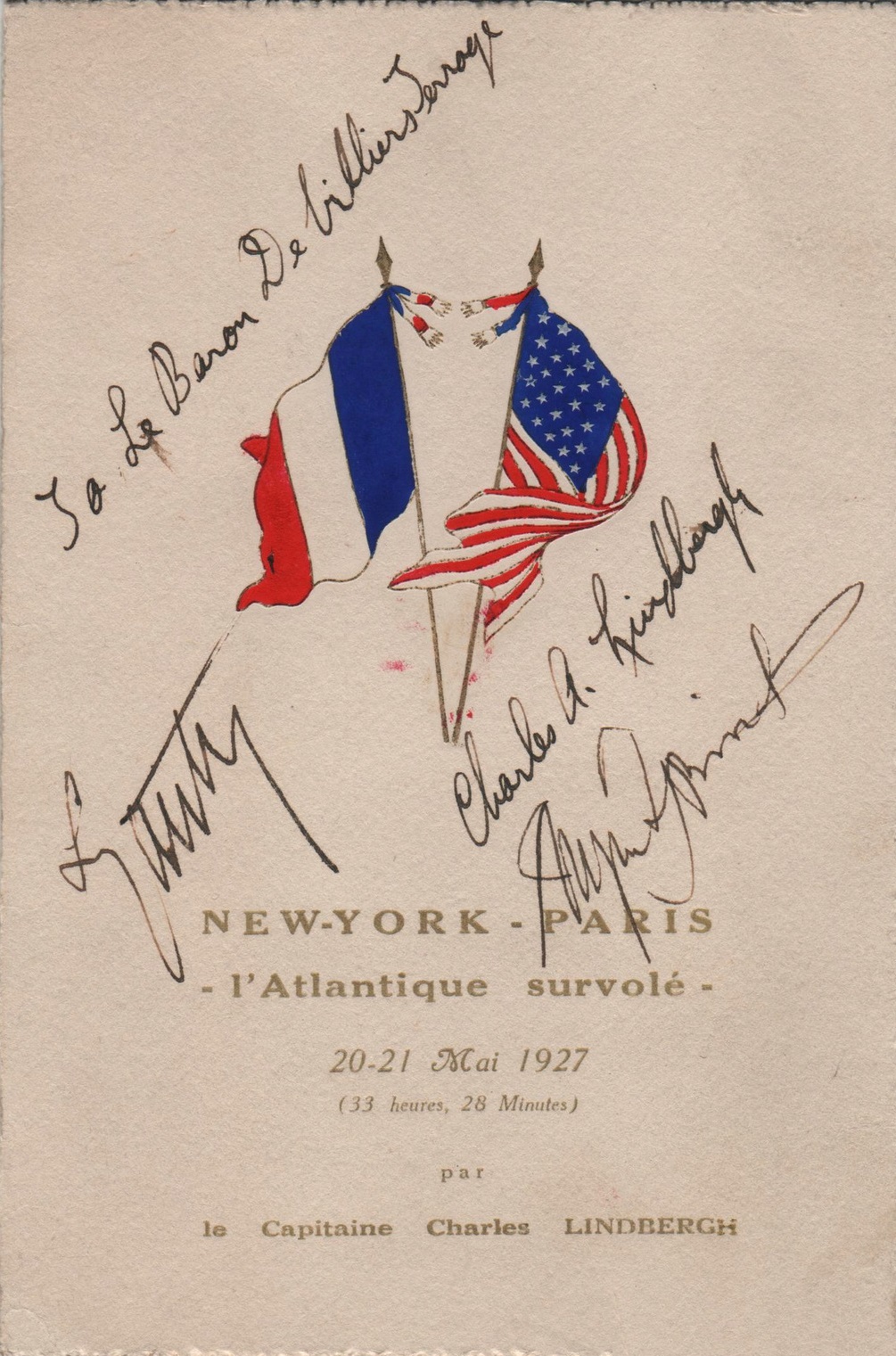 Repairs having been made to the Spirit of St. Louis at Le Bourget Aerodrome in Paris, Charles Lindbergh prepared to fly to Brussels, Belgium on Saturday, May 28. I believe that many, if not all, of the daytime photos I’ve seen labeled as having been taken at Le Bourget on May 21 (he arrived in the darkness) were actually photographed  on May 28.

Passing the Eiffel Tower soon after takeoff, Lindbergh then circled Paris, Senlis and Valenciennes before heading to Airfield Evere (vliegveld Evere in Dutch, also known as Haren-Evere) — the national airfield of Brussels before World War II. He landed at Evere following a flight lasting two hours and 15 minutes. In 2002, the Belgian Government offered the buildings at the former airport to NATO for a replacement headquarters. The new headquarters was destined to become operational in 2012. 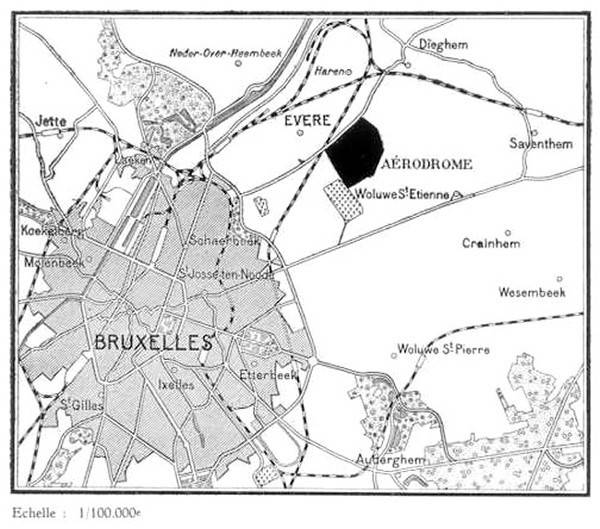 On Sunday, May 29, Lindbergh greeted huge crowds at the Hôtel de Ville (City Hall) in Brussels before taking off once again in the Spirit of St. Louis, for a two-hour, 35-minute fight to Croydon Airfield in South London, via Waereghem, Belgium. In London, he made one flight around Croydon Aerodrome before descending but took off again before the end of his landing roll in order to avoid injuring the massive crowd which had broken through police lines. After landing, the plane’s stabilizer was damaged by the pressure of the crowd. This was repaired at Croydon. 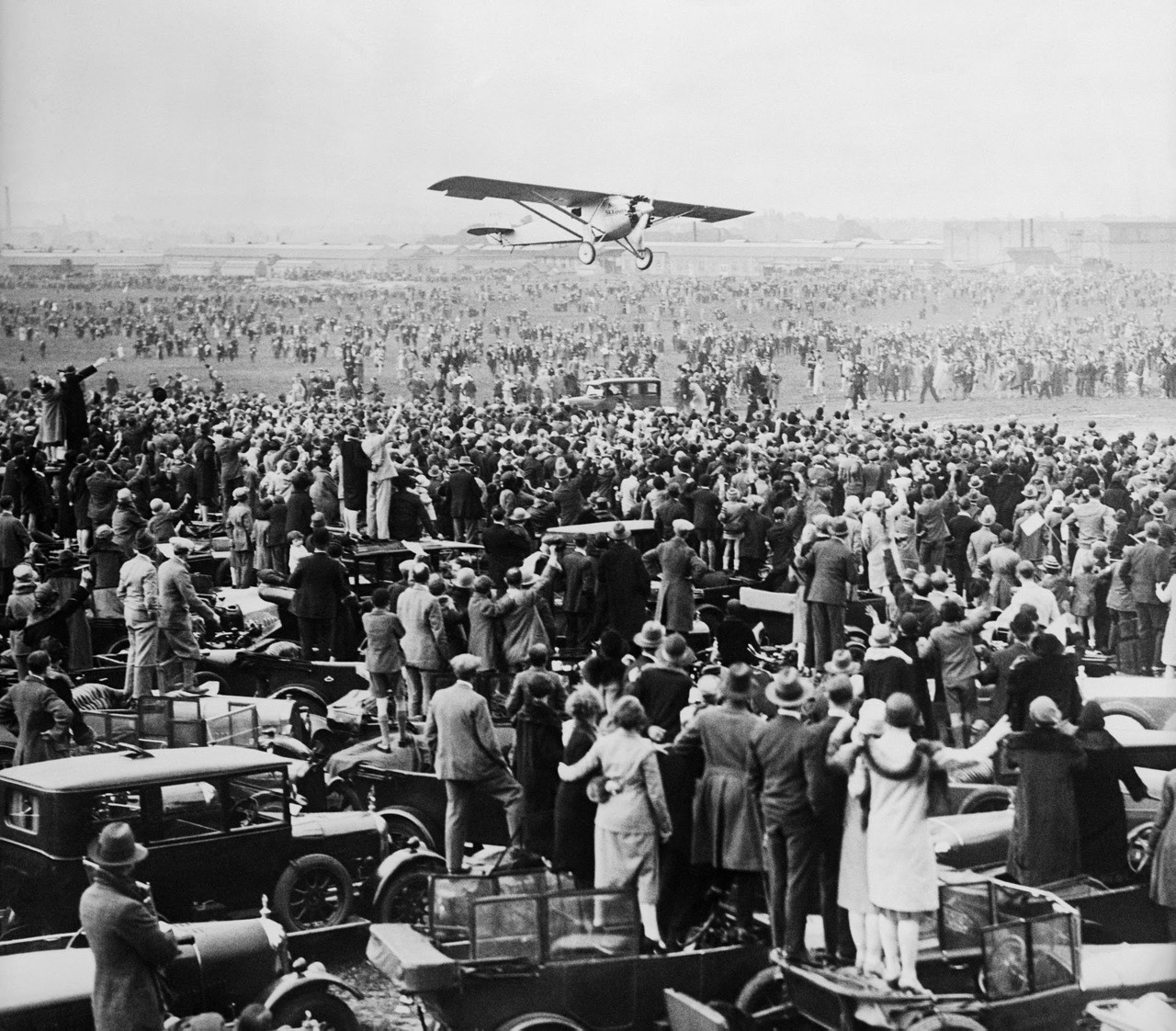 Once Lindbergh had been rescued from the hysterical crowds which greeted him at Croydon Aerodrome, he was taken to the United States Embassy and told that King George V wanted to receive him in audience. U.S. Ambassador Alanson Houghton happened to be on vacation and his place was taken by the chargé d’affaires who was, Lindbergh recalled later, “a boiled shirt who was rather in a state because I was in an ordinary business suit and had no frock coat” in which to be received by the King.

In the car on the way to Buckingham Palace, the chargé kept nervously instructing Lindbergh in court protocol, how and when he was to bow, and above all else when he was to walk backward.

“He got me kind o’ scared by the time we arrived,” Lindbergh said later. “And there at the door was a lord who said that the King wanted to see me alone. So I was taken into his room and I remembered to bow and we sat down.”

The young aviator and the aging King sat facing each other for an awkward moment, and then the monarch leaned forward.

“Now tell me, Captain Lindbergh,” he said. “There is one thing I long to know. How did you pee?”
It was a question which, Lindbergh said later, “sort of put me at my ease.”

“Well, you see, sir,” he said, “I had a sort of aluminum container. I dropped the thing when I was over France. I was not going to be caught with the thing on me at Le Bourget.”

Lindbergh made one final European fight in the Spirit of St. Louis on Tuesday, May 31, 1927. He took off from Croydon Aerodrome and flew south on a 50-minute journey to Gosport, a town lying on the peninsula on the western side of Portsmouth harbor on the south coast of Hampshire. At Gosport, the plane was dismantled by the Royal Air Force and crated.

On June 3, the boxed-up Spirit of St. Louis was placed on board the light cruiser USS Memphis (CL-13). At the time, the 550-foot long, 9,500-ton ship was the flagship of Commander, U.S. Naval Forces in Europe. Lindbergh embarked and Memphis set sail for Cherbourg, arriving at the French port the following day before heading across the Atlantic, taking her famous passenger back to the United States.

Scott #C49 was released by France on June 4, 1977, with a special pictorial cancellation applied at Paris-Le Bourget Airport. It depicts the Spirit of St. Louis flying east towards Paris and below it, flying west to New York, is the French biplane L’Oiseau Blanc (The White Bird), flown by French World War I ace Charles Nungesser and navigator François Coli who disappeared in an attempt to cross the Atlantic from Paris two weeks before Lindbergh took off. The 1.90-franc airmail stamp was designed and engraved by Pierre Forget with 8,000,000 copies recess printed and perforated 13. 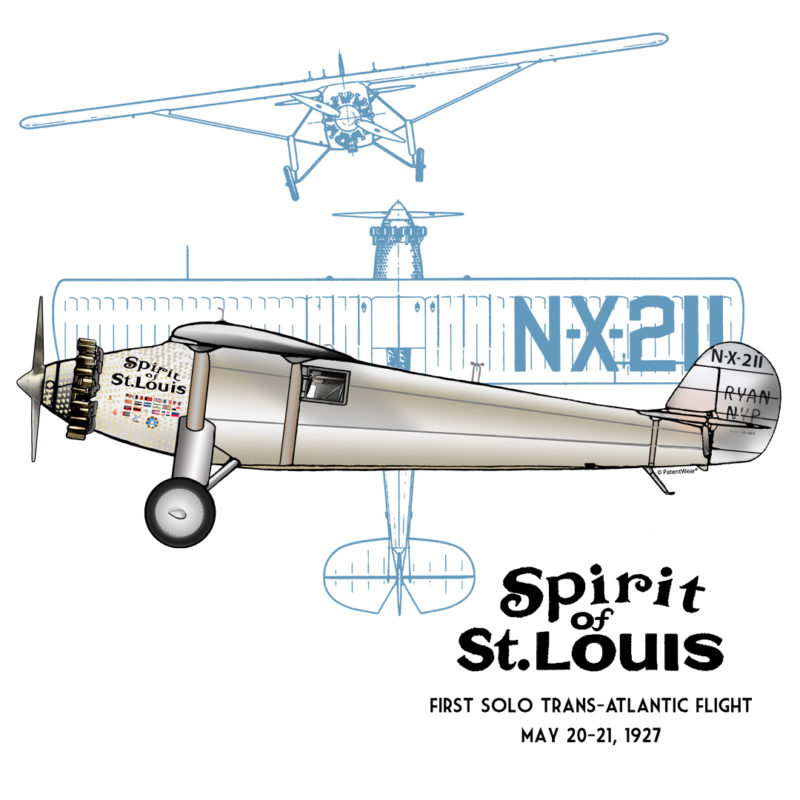