The jukong is a type of sailing boat found in the Australian Territory of the Cocos (Keeling) Islands where it is the preferred mode of transport across the atoll. It is more akin to the European whaleboat than to the similarly named jukung from Indonesia. The latter is also known as a cadik and is a traditional outrigger canoe used for fishing. The double outrigger jukung is but one of many types of Pacific/Asian outrigger canoes that use the crab claw sail traditional throughout Polynesia. Whilst this sail presents some difficulties in tacking into the wind, actually requiring to jibe around, a jukung is superb in its reaching ability and jibe-safe running. They are usually highly decorated and bear a marlin-like prow.

In the late 1980s there was a seafaring journey of over 1000 nautical miles in open outrigger jukung canoes by nine crews, who sailed from Bali to Darwin across the Timor Sea. Crews were from New Zealand, Australia, USA, England, Japan, France, Germany, The Netherlands and Indonesia. This was a three-month expedition masterminded by Bob Hobmann, filmed and made into a documentary called Passage Out of Paradise; it was featured by the National Geographic Society as “The Great Jukung Race”. It was the first ever expedition of this kind, following purported Austroneasian sailing routes in craft dating to 7,000 years ago.

Challenges experienced were storms requiring numerous boat repairs, waterspouts, excessive exposure to sun, heat, or rain, adverse currents & whirlpools. Hazards included drifting onto war-torn Timor, unpredictable behavior/welcome from remote villagers, salt water boils, wound infections, malnutrition, near misses with night-time freighters, sightings of sperm whales and giant white sharks. Some sailors were viciously attacked by hornets while preparing to leave a remote beach camp. The crews rebelled and unanimously decided to sail as a group, as opposed to racing the final leg of the journey, for safety. As a result, all the sailors miraculously survived a cyclone with greater than 110-kilometer per hour winds in their tiny bamboo and rope jukungs, although the Australian crew was lost for two days and were located by the Australian Coast Guard with their smashed jukung washed up on an island.

Currently there is a modern version of jukung made from High Density Polyethylene (HDPE) pipe in Indonesia. Advertised as unsinkable, the main body is made of a closed HDPE pipe that contains sealed air as the source of its buoyancy.

However, the jukong of the Cocos (Keeling) Islands retain their traditional wooden hull construction. The hull is typically white topped with blue and yellow stripes while the gunwales above have a varnished wood finish. The craft has a single detachable steering plank (rudder) at the stern and has but a single mast to hold up the sails.

The smaller boats — jukong kolek — are designed for a single sailor. These were used mainly for transport of people or coconuts around the island. Coconut collectors were referred to as “nutters”. Jukongs have also been the traditional fishing boats of the islands. However, in recent years these usages have declined and for practical sailing the jukong has been largely replaced by the metal dinghy, known locally as a “tinny” in Australian English.

The main use of the jukong today is as a racing boat. Most of the races occur after the holiday of Hari Raya (Ramadan) in the coral atoll’s central lagoon with a small amount of prize money awarded to the winner of each race. It is hoped that the races will generate more tourism to the Cocos (Keeling) Islands. Australia Post has done its part by portraying jukong boats on numerous stamps issued over the years. At the present, I only have four stamps from the territory on mail from “mainland’ Australia where the stamps are valid for postage as well. All but one pictures at least one jukong.

Lately, I have featured a few miniature sheets and other stamp multiples. Today’s strip of three is actually an incomplete set as Scott #292 includes five stamps with each stamp receiving the lower-case letter designation “a” through “e”. Scott #292a pictures a single jukong boat with a red sail, Scott #292b shows two boats — one with blue and white sails and one with a red sail — while Scott #292c shows one boat with a yellow sail. I am missing Scott #292d (two boats sailing away) and Scott #292e (two boats, one with a red sail and the other with a white and blue sail). These are each denominated at 45 cents and were printed by lithography, perforated 14½ x 14. They were issued in sheets of 20, both with other stamps from the set (Scott #289-291 in strips of five featuring reef triggerfish on the 5-cent values, green turtles on the 10-cent stamps and pyramid butterflyfish on the 20-cent denominations) and full sheets containing four strips of five Scott #292.

In researching this “random stamp day” article, I came across a few nice Cocos (Keeling) Islands stamps and have just bought them online. Yes, Scott #330 and #331 do include jukong boats. Here are the images from the auction site I purchased them from: 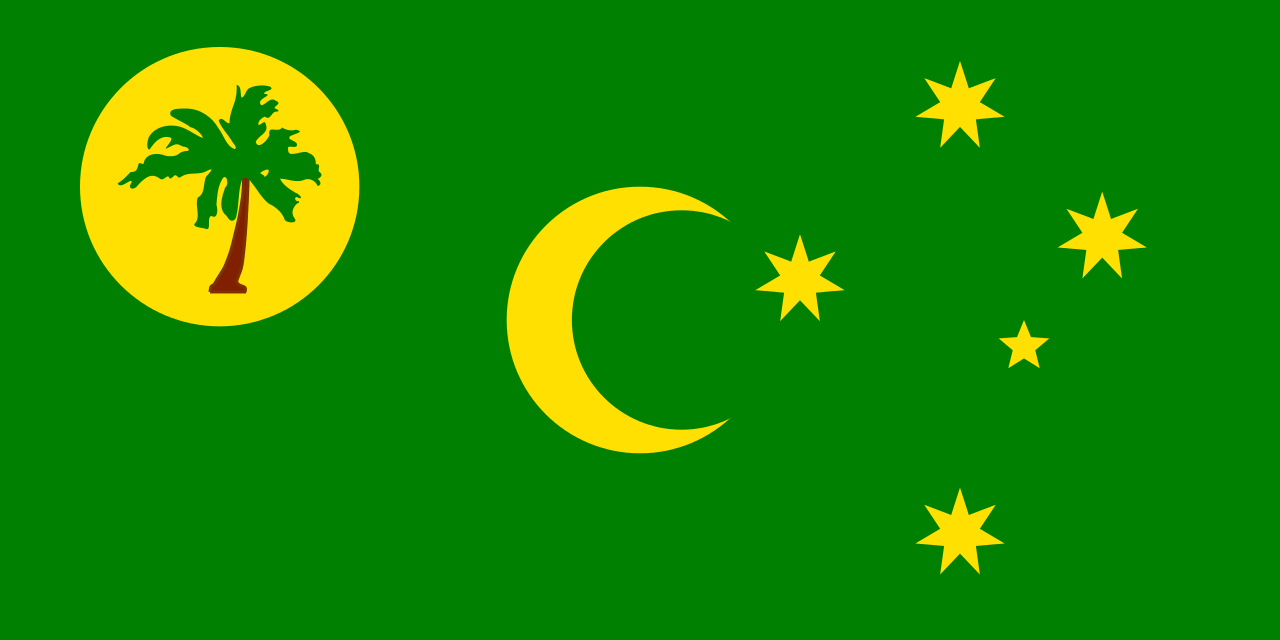 One thought on “Jukong Boat of the Cocos (Keeling) Islands”