The Republic of Upper Volta (République de Haute-Volta in French) was a landlocked West African self-governing colony within the French Community. Before attaining autonomy it had been French Upper Volta, a colony of French West Africa established on March 1, 1919, from territories that had been part of the colonies of Upper Senegal and Niger and the Côte d’Ivoire. The colony was dissolved on September 5, 1932, with parts being administered by the Côte d’Ivoire, French Sudan and the Colony of Niger. After World War II, on September 4, 1947, the colony was revived as a part of the French Union, with its previous boundaries. On December 11, 1958, it was reconstituted as the self-governing Republic of Upper Volta within the French Community, and two years later on August 5, 1960, it attained full independence. On August 4, 1984, the name was changed to Burkina Faso.

Upper Volta covered an area of around 105,900 square miles (274,200 km²) and was surrounded by the present-day countries of Mali to the north; Niger to the east; Benin to the southeast; Togo and Ghana to the south; and Ivory Coast to the southwest. Its capital was Ouagadougou.

The name Upper Volta indicated that the colony contained the upper part of the Volta River. The colors of the national flag corresponded to the names of its three main tributaries — the Black Volta (or Mouhoun), the White Volta (Nakambé) and the Red Volta (Nazinon). The Black Volta is one of the country’s only two rivers which flow year-round, the other being the Komoé, which flows to the southwest. The basin of the Niger River also drains 27% of the country’s surface. The Niger’s tributaries — the Béli, Gorouol, Goudébo, and Dargol — are seasonal streams and flow for only four to six months a year. They still can flood and overflow, however. The country also contains numerous lakes — the principal ones are Tingrela, Bam, and Dem. The country contains large ponds, as well, such as Oursi, Béli, Yomboli, and Markoye. Water shortages are often a problem, especially in the north of the region.

Upper Volta was situated mostly between latitudes 9° and 15°N (a small area is north of 15°), and longitudes 6°W and 3°E. The  land was made up of two major types of countryside. The larger part of the colony was covered by a peneplain, which formed a gently undulating landscape with, in some areas, a few isolated hills, the last vestiges of a Precambrian massif. The southwest of the territory, on the other hand, formed a sandstone massif, where the highest peak, Ténakourou, is found at an elevation of 2,457 feet (749 meters). The massif is bordered by sheer cliffs up to 492 feet (150 m) high. 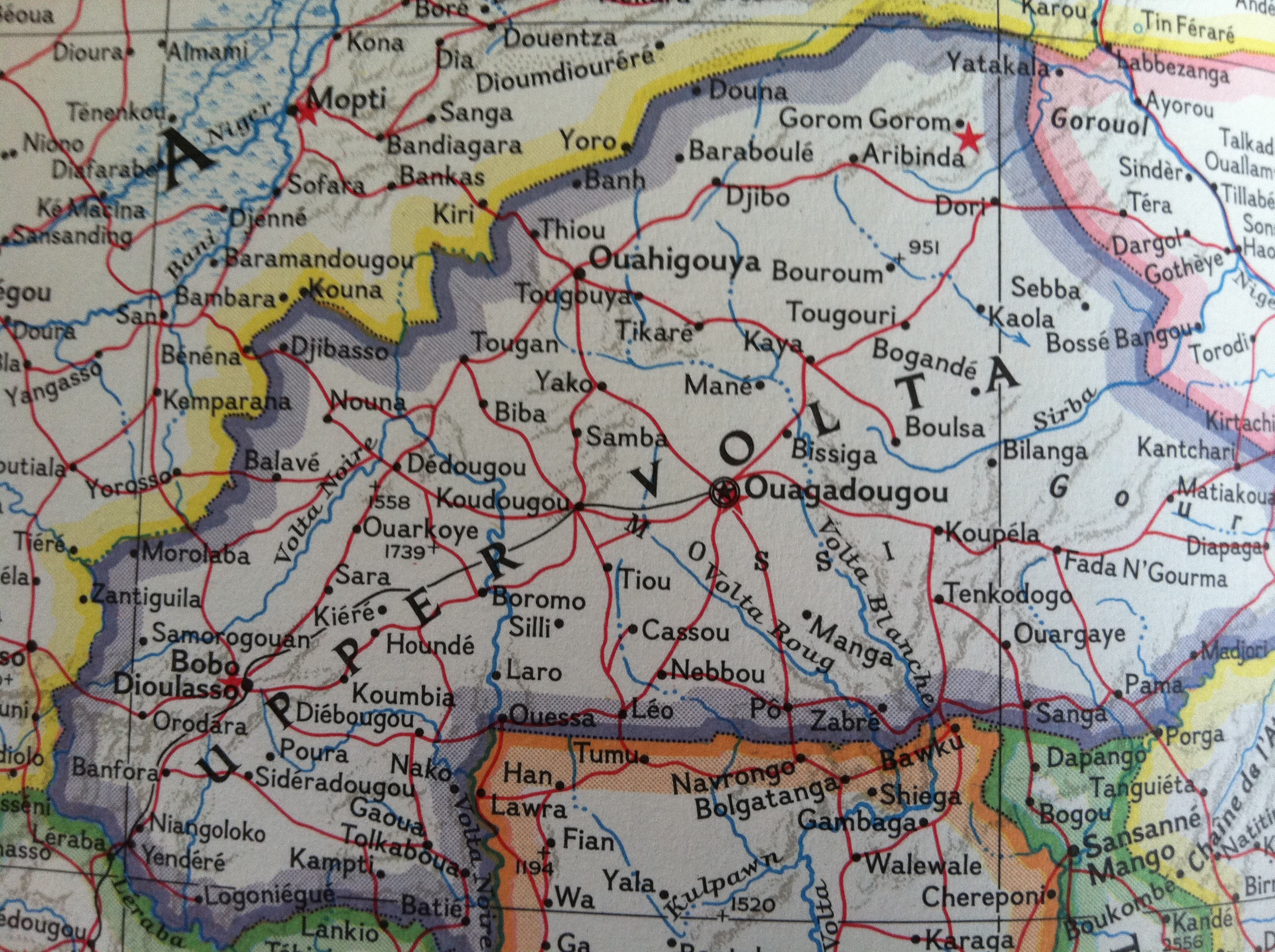 Recent archaeological discoveries at Bura in southwest Niger and in adjacent southwest Burkina Faso have documented the existence of the iron-age Bura culture from the 3rd century to the 13th century. The Bura-Asinda system of settlements apparently covered the lower Niger River valley, including the Boura region of Burkina Faso. Further research is needed to understand the role this early civilization played in the ancient and medieval history of West Africa.

Loropéni is a pre-European stone ruin which was linked to the gold trade. It has been declared as Burkina Faso’s first World Heritage site.

From medieval times until the end of the 19th century, the region of Upper Volta was ruled by the empire-building Mossi people, who are believed to have come up to their present location from northern Ghana, where the ethnically-related Dagomba people still live. For several centuries, Mossi peasants were both farmers and soldiers. During this time the Mossi Kingdoms successfully defended their territory, religious beliefs and social structure against forcible attempts at conquest and conversion by their Muslim neighbors to the northwest.

In the 1890s during the European Scramble for Africa, the territory of Burkina Faso was invaded by France, When the French troops of Kimberly arrived and claimed the area in 1896, Mossi resistance ended with the capture of their capital at Ouagadougo. Colonial control was established following a war of conquest between 1896 and 1904. The territory was made part of French West Africa in 1904, On March 1, 1919, certain provinces from Ivory Coast were united into French Upper Volta in the French West Africa federation. In 1932, the new colony was split up for economic reasons; it was reconstituted in 1937 as an administrative division called the Upper Coast. After World War II, the Mossi actively pressured the French for separate territorial status and on September 4, 1947, Upper Volta became a French West African territory again in its own right.

A revision in the organization of French Overseas Territories began with the passage of the Basic Law (Loi Cadre) of July 23, 1956. This act was followed by reorganizational measures approved by the French parliament early in 1957 that ensured a large degree of self-government for individual territories. The Republic of Upper Volta was established on December 11, 1958, as a self-governing colony within the French Community. On July 11, 1960 France agreed to Upper Volta becoming fully independent, which it gained on August 5. The first president, Maurice Yaméogo, was the leader of the Voltaic Democratic Union (UDV). The 1960 constitution provided for election by universal suffrage of a president and a national assembly for 5-year terms. Soon after coming to power, Yaméogo banned all political parties other than the UDV. Yaméogo’s government was viewed as corrupt and said to perpetuate neo-colonialism by favoring French political and economic interests which had allowed politicians to enrich themselves but not the nation’s peasants or small class of urban workers.

The government lasted until 1966 when — after much unrest including mass demonstrations and strikes by students, labor unions, and civil servants — the military intervened and deposed Yaméogo in the 1966 Upper Voltan coup d’état. The coup leaders suspended the constitution, dissolved the National Assembly, and placed Lieutenant Colonel Sangoulé Lamizana at the head of a government of senior army officers. The army remained in power for four years; on June 14, 1970, the Voltans ratified a new constitution that established a four-year transition period toward complete civilian rule. Lamizana remained in power throughout the 1970s as president of military or mixed civil-military governments. He faced a major crisis in the form of the Sahel drought and famine. In 1973, he was sent to the UN and the US in order to secure aid. After conflict over the 1970 constitution, a new constitution was written and approved in 1977, and Lamizana was reelected by open elections in 1978.

Colonel Zerbo also encountered resistance from trade unions and was overthrown two years later on November 7, 1982, in a coup d’état led by Major Dr. Jean-Baptiste Ouédraogo and the Council of Popular Salvation (CSP). The CSP continued to ban political parties and organizations, yet promised a transition to civilian rule and a new constitution.

Infighting developed between the right and left factions of the CSP. The leader of the leftist faction of Ouédraogo’s government, Thomas Sankara, was appointed Prime Minister in January 1983 but was subsequently imprisoned. Efforts to free him, directed by Captain Blaise Compaoré, led to the popularly-supported military coup d’état on August 4, 1983, in which he became President.

The coup brought Sankara to power and his government launched an ambitious socioeconomic program which included a nationwide literacy campaign, land redistribution to peasants, railway and road construction and the outlawing of female genital mutilation, forced marriages and polygamy. Under the direction of Sankara, the country changed its name on August 4, 1984, from Upper Volta to Burkina Faso, which means “Land of Incorruptible People”.

Prior to the creation of French Upper Volta in 1919, postal service in the area was administered by Senegambia and Niger and then Upper Senegal and Niger. Upper Volta’s first stamps were issues of Upper Senegal and Niger overprinted HAUTE-VOLTE, appearing in 1920. Overprints and surcharges continued to be issued throughout the 1920s, then superseded in 1928 by a definitive series of 23 stamps featuring three designs: a Hausa chief, Hausa woman, and Hausa warrior. Upper Volta also participated in the Colonial Exposition Issue of 1931, but in 1932 the colony was dissolved and its territory divided between Côte d’Ivoire, French Sudan and Niger.

Reconstituted in 1947, its postal administration continued to be part of French West Africa until the establishment of the Republic of Upper Volta in 1958. The Republic operated its own postal system, and issued its first stamp in 1959, marking the first anniversary of the Republic, and memorializing governing council president Daniel Ouezzin Coulibaly, who had died recently. In 1960 it issued a definitive series of 18 stamps showing native animal masks, and generally followed a stamp program consistent with other African members of the French Community.

The only topical that I like less than Disney characters is sports (with certain exceptions made for the Olympic Games). Football (“soccer”) is probably my least favorite of all sports portrayed on stamps. However, the sole stamp I currently own from the Republic of Upper Volta (and, for that matter, French Upper Volta or Burkina Faso) is 20-franc value in a set of five stamps — three general issue and two for airmail — released on March 19, 1974, to mark the 10th World Cup Football Championship held in West Germany (including West Berlin) from July 13-July 7 of that year with the final occurring at Olympiastadion in Munich (Scott #328-330 and #C185-186). The official mascots of this World Cup were Tip and Tap, two boys wearing an outfit similar to West Germany’s, with the letters WM (Weltmeisterschaft, World Cup) and number 74. 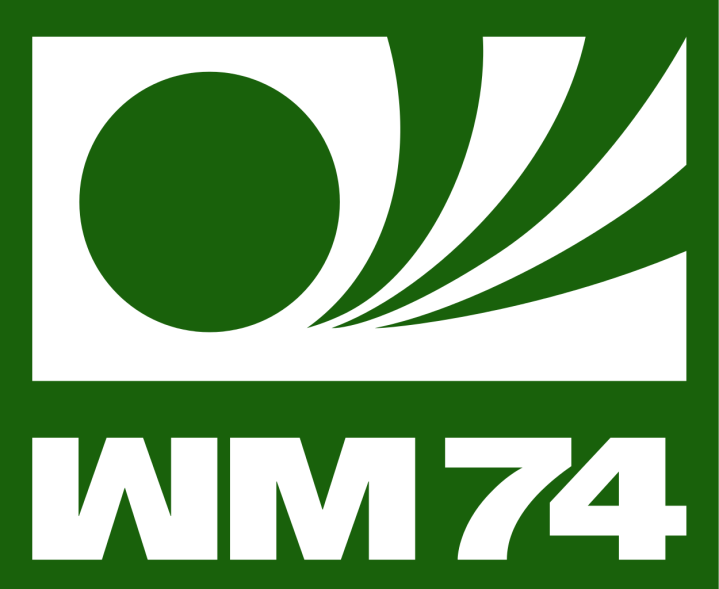 The 1974 tournament marked the first time that the current trophy, the FIFA World Cup Trophy, created by the Italian sculptor Silvio Gazzaniga, was awarded. The previous trophy, the Jules Rimet Trophy, had been won for the third time by Brazil in 1970 and awarded permanently to the Brazilians. The host nation won the title beating the Netherlands in the final, 2–1. The victory was the second for West Germany, who had also won in 1954. Australia, East Germany, Haiti and Zaire made their first appearances at the final stage, and the Netherlands and Poland their first since 1938.

Scott #329, like the others in this set, was printed by lithography and perforated 12½ x 13. It portrays Bozhil Naydenov Kolev (Божил Найденов Колев in Bulgarian, born January 12, 1949) who made 60 appearances for the Bulgarian national football team (Български национален отбор по футбол) from 1969 to 1978.  The team’s home stadium is Vasil Levski in Sofia. Their best World Cup performance was in the 1994 World Cup in the United States, where they beat defending champions Germany to reach the semi-finals, controversially losing to Italy.

In 1974, Bulgaria qualified for their fourth-straight World Cup. They were drawn in a group with the Netherlands, Sweden and Uruguay. Bulgaria started off with Sweden on June 15 at Rheinstadion in Düsseldorf, a game attended by 23,800. After 90 minutes, the game remained goalless in a 0–0 draw. Although no goals, Bulgaria were down set from the disallowed goal they scored, that was ruled offside by the side referee.On June 19, Bulgaria tied with Uruguay 1–1 at Niedersachsenstadion in Hanover (13,400 attendance). Bulgaria remained in contention; all they needed to do was tie against the Netherlands at Westfalenstadion in Dortmund on June 23. As the final match came, Bulgaria fell by a 1–4 score. The Netherlands scored all the goals in a game attended by 53,300, including an own goal for Bulgaria. Bulgaria remained in third place in the group and did not move on to the next round. 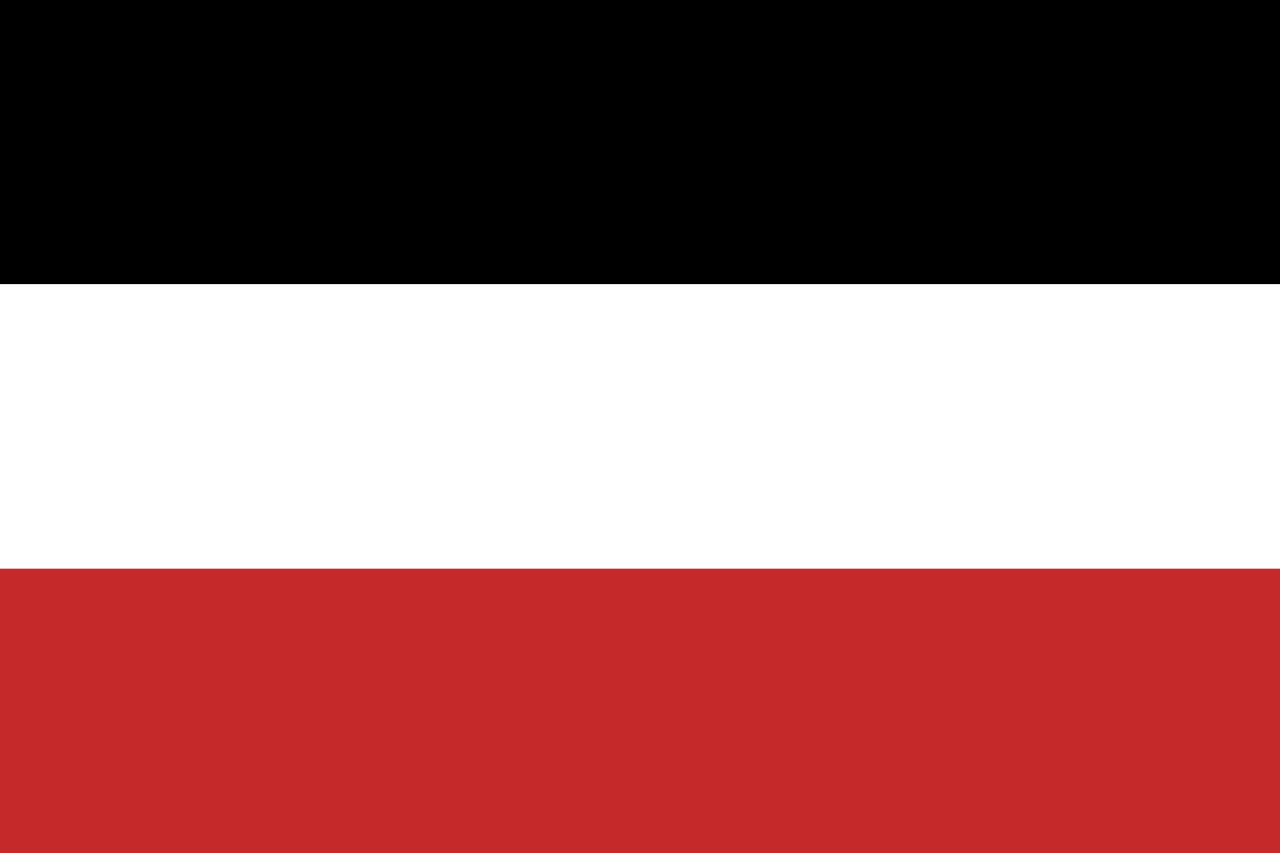