Malaysia isn’t really that far from where I live in southern Thailand, perhaps 90 minutes on an airplane will get me to the capital of Kuala Lumpur a flight I’ve made only once. I took the bus to Penang dozens of times in late 2010 (my last trips south of Phuket, actually) when my business visa expired in the midst of Bangkok’s worst flooding in decades as I awaited the one official who had to sign my approval letter to return from sandbag-filling duties. That was approximately a 12-hour journey (counting an early=morning three-hour stop in the southern Thai city of Hat Yai waiting for the border to open for the day.

Yet, despite it proximity to my home it seems like a completely different place than Thailand while other nearby nations such as Cambodia, Laos, and Myanmar seem much the same apart from language. Much of Malaysia remains a mystery to me such as the fact that it has a space program. While certainly not on the scale of NASA in the United States, or really of any other nation I can think of, it is producing communications satellites albeit launched by other nations’ rockets.

In 1994, Binariang signed a contract with Hughes Space and Communications Company (now Boeing Satellite Systems) for two Model 376 satellites. The project was named the “Malaysia East Asia Satellite” program, or MEASAT for short. The satellites opened the door to reliable telephone and data transmission services to all of Malaysia, helping to strengthen the unity between the peninsula and the island portions of the nation. The satellites also contributed greatly to the rapid growth of computer networking in Malaysia, as well as the creation of a new direct-to-home (DTH) satellite television service, called “Astro”.

As advanced Model 376 spacecraft, the MEASAT-1 and -2 satellites have three enhancements over the standard model. They were the first in the 376 series to be fitted with gallium arsenide solar cells, which deliver 40 percent more payload power as compared to their silicon predecessors. They were also the first Model 376s to use lightweight, high-gain shaped antenna. The satellites also used a more efficient bipropellant system for station-keeping and attitude control maneuvers.

In the latter part of 2009, MEASAT-1 was still functioning reliably beyond its planned 12 year life. With help from Boeing Satellite Systems, MEASAT drift relocated MEASAT-1 from its 91.5°E orbital location, across the Indian Ocean to provide service to the African continent from 46°E. In January, 2010, MEASAT renamed MEASAT-1 as “AFRICASAT-1”. The satellite was de-orbited and sent to a ‘graveyard’ orbit in April 2013 once it reached its end-of-life.

Scott #574 is the lowest denomination in a set of three stamps, perforated 13½, and one souvenir sheet, perforated 14, released on January 13, 1996, to commemorate the launch of the MEASAT-1 satellite. The 20-cent stamp portrays the Ariane 4 rocket lifting off from the facility in French Guiana. The 50-cent stamp (Scott #575) pictures the satellite in orbit over Southeast Asia while Scott #576 (1 ringgit) shows a view of the Satellite Control Center on Langawi Island in northwest Malaysia. The souvenir sheet (Scott #577) contains a horizontally-oriented 5-ringgit stamp with a view of the satellite entering Earth orbit. This image is a hologram and the Scott catalogue warns that soaking the stamp may damage the holographic image. 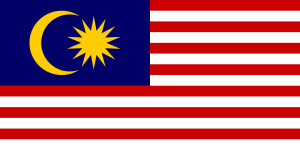