The Orange River Colony (Oranjerivierkolonie) was the British colony created after Britain first occupied (1900) and then annexed (1902) the independent Orange Free State (Oranje-Vrijstaat in Dutch) in the Second Boer War. The colony ceased to exist in 1910, when it was absorbed into the Union of South Africa as Orange Free State Province. Extending between the Orange and Vaal rivers, its borders were determined by Great Britain in 1848 when the region was proclaimed as the Orange River Sovereignty, with a seat of a British Resident in Bloemfontein.

In the northern part of the territory a Voortrekker Republic was established at Winburg in 1837. This state was in federation with the Republic of Potchefstroom which later formed part of the South African Republic (Transvaal). Following the granting of sovereignty to the Transvaal Republic, the British recognized the independence of the Orange River Sovereignty and the country officially became independent as the Orange Free State on February 23, 1854, with the signing of the Orange River Convention. The new republic incorporated the Orange River Sovereignty and included the traditions of the Winburg-Potchefstroom Republic.

The colony’s name derived partly from the Orange River, which in turn was named in honor of the Dutch ruling royal family, the House of Orange, by the Dutch settlers under Robert Jacob Gordon. 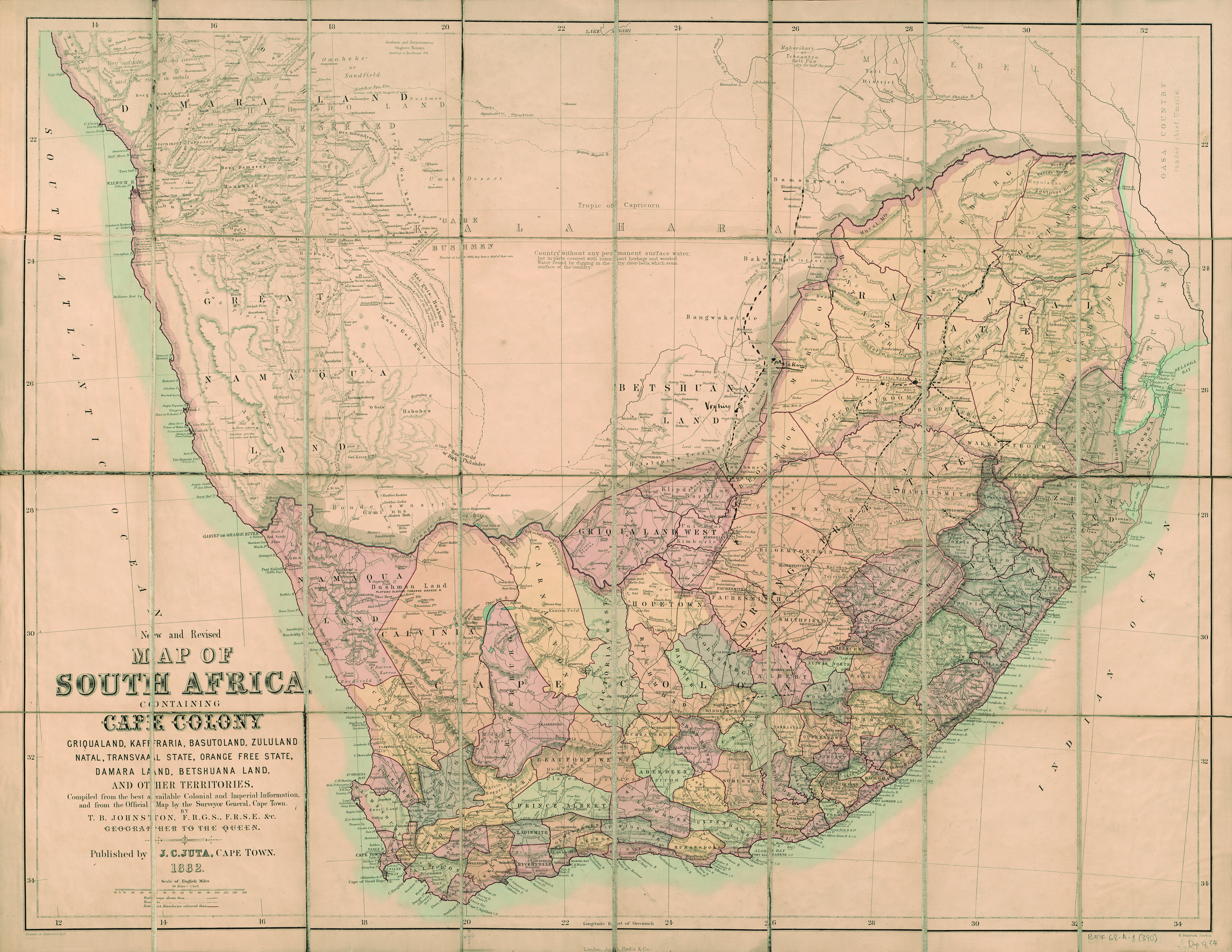 The Orange Free State government had moved to Kroonstad during the first months of the war and would subsequently convene in the field until the end of the war. From the perspective of the Orange Free State, independence was only lost with the ratification of the articles of peace with the Treaty of Vereeniging on May 31, 1902.

Therefore, there existed an ambiguous constitutional situation between October 6, 1900, and May 31, 1902, with two constitutional entities and two governments. On the Boer side, the government was led by State President Martinus Theunis Steyn until May 30, 1902, when he went on sick-leave and was replaced by General Christiaan de Wet as Acting State President. On the British side, Sir Alfred Milner was appointed Administrator of the Orange River Colony on January 4, 1901, with Hamilton John Goold-Adams as Lieutenant-Governor.

Orange Free State had first issued postage stamps in 1868. The sole design used was an orange tree, with the inscription Oranje Vrij Staat in the margin. The stamps were typographed by Thomas de la Rue and Company of London, and came in denominations from one penny to five shillings, in various colors. Periodic shortages forced the use of overprints in 1877, 1881, 1882, 1888, 1890, 1892, 1896, and 1897. In March and April 1900, the previous stamps were reissued by the British occupying forces overprinted V.R.I. (Victoria Regina Imperatrix — Victoria, Queen and Empress) and surcharged with the same value of the original stamps (Scott #44-53g).

In August 1900 and again in May 1902, Cape of Good Hope stamps were overprinted ORANGE/RIVER/COLONY (Scott #54-56).  In 1902, previously-surcharged V.R.I. 6-pence and 5-shilling stamps received an additional surcharge of 4 pence (in carmine or vermillion, Scott #58) or `1 shilling (in orange, Scott #60). Also in 1902, a single 6-pence Orange Free State stamp was surcharged 6 pence in black as the previous occupation issues but with the overprint E.R.I. (Edward Rex Imperator) instead of V.R.I. (Scott #59).

Following the end of hostilities Lord Milner visited Bloemfontein on June 23, 1902, and promulgated the new constitution, in the presence of military officials, heads of civil department and representatives of the late Boer government (including General De Wet). He was sworn in as Governor and Commander-in-Chief of Orange River Colony on the same day.

In 1903-1904, a set of nine stamps was issued portraying King Edward VII, a springbok and a gnu (Scott #61-69). Some of these stamps can be found with the overprint C.S.A.R. for use by the Central South African Railway.

By 1904, sentiment was growing for some form of self-government. The Orangia Unie (Orange Union Party) was formally constituted in May 1906, after several months of preparation. A similar organization, called Het Volk, had been formed by the Transvaal Boers in January 1905. Both unions had constitutions almost identical with that of the Afrikaner Bond, a former pan-Afrikaner political movement, and their aims were also similar — to secure the position of the Afrikaners in state and society. The chairman of the Orangia Unie was Abraham Fischer, leading politician of the pre-Boer War period and top diplomat of the Boer republics during the Second Boer War. Among the other prominent members were J. B. M. Hertzog, Christiaan de Wet and Martinus Theunis Steyn.

A second political party, the Constitutional Party was formed by a group of burghers content with British rule. Chairman of the party was Sir John G. Fraser, before the Second Boer War a prominent (pro-British) member of the Volksraad of the Orange Free State. The Constitutional Party had a strong following in Bloemfontein, but not outside the capital. It is noteworthy that the political programs of the two parties were very similar, the real difference between them being the attitude towards British annexation and Afrikaner influence.

In 1905, Lord Selborne, formerly First Lord of the Admiralty, replaced Viscount Milner as high commissioner for South Africa and governor of the Transvaal and Orange River colonies. Selborne had come to South Africa with a brief to guide the former Boer republics from Crown colony government towards self-government. When Liberal Party came into office in Britain in December 1905 the process was sped up, with the decision to give both the Transvaal and Orange River colonies self-government without delay. Selborne accepted the changed situation, and the experiment proved successful. He ceased to be governor of the Orange River Colony on its assumption of self-government in June 1907, but retained his other posts until May 1910, retiring on the eve of the establishment of the Union of South Africa.

On January 7, 1907 Selborne released a dispatch, known as the Selborne Memorandum. It reviewed the situation in South Africa in all its economic and political aspects and was a masterly and comprehensive statement of the dangers inherent in the existing political system and of the advantages a political union offered. The document had a marked influence on the course of events and together with Selborne’s conciliatory approach assisted in reconciling the Dutch and British communities of South Africa.

After the elections of 1907, the colony received self-government on November 27, 1907. Abraham Fischer became the first (and only) prime minister of the colony (in office November 27, 1907 to May 31, 1910). The first Legislative Assembly consisted of twenty-nine members of the Orangia Unie, five Constitutionalists and four independents.

Four of the denominations of the 1903-1904 Edward VII stamps were reissued with different watermarks in 1907-1908 (Scott #70-73). These would be the last stamps issued by the Orange River Colony.

In May 1908, the Orange River Colony took part in an inter-state conference which met at Pretoria and Cape Town, and determined to renew the existing customs convention and to make no alteration in railway rates. These decisions were the result of an agreement to bring before the parliaments of the various colonies a resolution advocating the closer union of the South African states and the appointment of delegates to a national convention to frame a draft constitution.

In this conventionm former state president M. T. Steyn took a leading and conciliatory part, and subsequently the Orange River legislature agreed to the terms drawn up by the convention for the unification of the four self-governing colonies in the Union of South Africa. Under the imperial act by which unification was established, on May 31, 1910, the colony entered the Union under the style of the Orange Free State Province. Fischer and Hertzog became members of the first Union government, while A.E.W. Ramsbottom became the first administrator of the Orange Free State as a province of the Union.

Scott #57 was issued in 1902 by adding a carmine 4-pence surcharge on an Orange Free State 6-pence ultramarine stamp originally issued in  1900 (Scott #9) and previously overprinted V.R.I. and surcharged 6 pence (Scott #51d, with the periods in “V.R.I.” raised above the bottom of the letters rather than level with them) by the British in 1900-1901. The stamp was typographed on unwatermarked paper by Thomas de la Rue & Company, perforated 14.  On all of the Orange Free State stamps overprinted by the Orange River Colony, the perforations touch the design on one or two sides due to the narrow spacing of the stamps on the plates. Stamps with perforations clear of the design on all four sides are scarce and command higher prices when buying and selling. 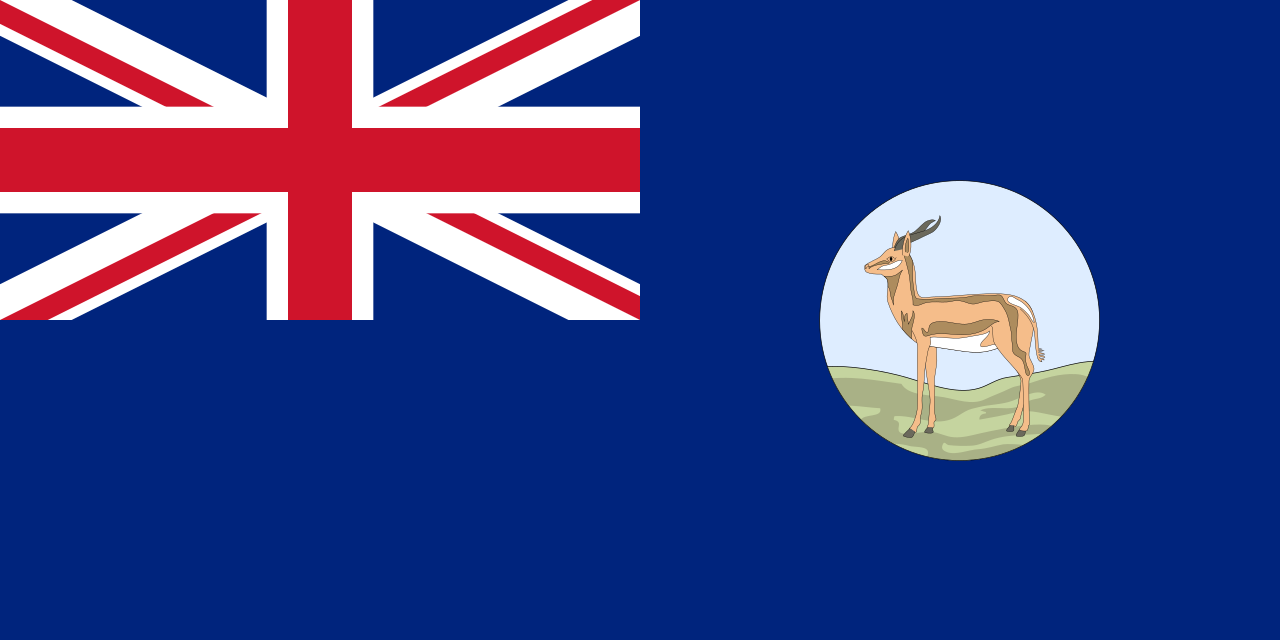